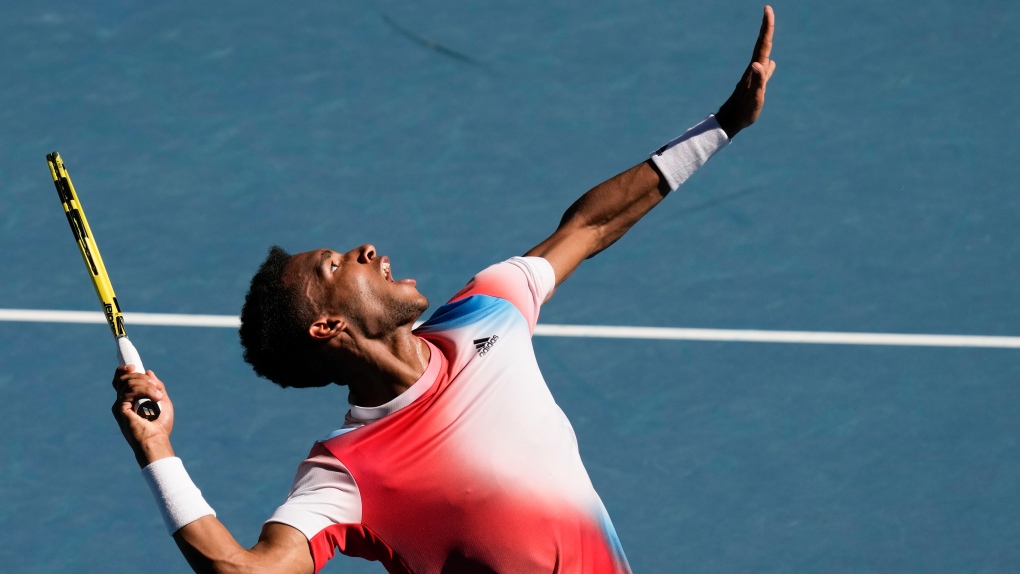 Felix Auger-Aliassime of Canada serves to Marin Cilic of Croatia during their fourth-round match at the Australian Open in Melbourne, Australia, on Jan. 24, 2022. (AP Photo/Simon Baker)
MELBOURNE, Australia -

Some 24 hours after Denis Shapovalov reached his first Australian Open men's singles quarterfinal, his friend and countryman Felix Auger-Aliassime joined him in the final eight.

Auger-Aliassime overcame a fast and furious start by 2018 finalist Marin Cilic and held on tight until he could turn things around, in a 2-6, 7-6 (7), 6-2, 7-6 (4) victory on a steamy day in Melbourne that challenged even the fittest tennis players in the world.

Fellow Canadian Milos Raonic has reached the quarterfinals or better at the Australian Open five times.

But this is the first time two Canadians have done it in the same year. And it's the second time in the last three Grand Slam tournaments that they have done it.

It's also the third consecutive Grand Slam tournament in which Auger-Aliassime has reached at least the quarterfinal stage.

Now it gets even tougher, as the two take on the two biggest favorites to take the title among the eight who will remain after Monday's play.

On Wednesday, Auger-Aliassime will play No. 2 seed Daniil Medvedev, who survived the throwback serve-volley game of American Maxime Cressy -- as well as the heat and some physical woes -- to advance on Monday.

But before that, Shapovalov will square off against 20-time Grand Slam champion Rafael Nadal on Tuesday.

"I'm thrilled for him, and thrilled for Canadian tennis. I think we're both showing that we're not here by chance. We're proving week after week that we're here to stay," Auger-Aliassime said.

The Montreal native had managed just one set in three previous losses to the Croat.

Cilic was nearly untouchable in the first set; there wasn't much Auger-Aliassime could do.

The 21-year-old Canadian was erratic on the forehand, too -- a problem he's spent the last couple of years on tour trying to resolve.

He hung on by his fingernails, waiting for Cilic's superb level to drop, and for his own to rise.

"I tried to stay in contact, find a solution little by little. And I started to serve better in the second set," Auger-Aliassime said.

"Compared to other times I played him, there was less panic on my part. I stayed calmer. I believed in myself a bit more, and I think that's what made the difference at the end," he added. "It's a nice improvement for me, in various aspects of my game."

Medvedev is another player Auger-Aliassime has yet to beat in three tries.

He came closest in their first meeting, at the National Bank Open in Toronto in 2018 as Auger-Aliassime was just turning 18.

Medvedev won in a third-set tiebreak.

"We've both evolved throughout the times we played. That first time (in 2018) he wasn't the Medvedev of today, and I'm not the same either," Auger-Aliassime said.

"At the US Open (Medvedev won in straight sets last September, in Auger-Aliassime's first Grand Slam semifinal appearance, and won the tournament), my level was pretty good. I had a set point on my racquet in the second set. The match might have been a bit different, had I converted it," the Canadian said.

The two met again in the semifinals of the ATP Cup earlier this month in Sydney. That was a 6-4, 6-0 win for Medvedev.

"That one was largely in his favour. I'll see what I can improve, because I'll have to be better than that physically and mentally to stay with him," Auger-Aliassime said.

Canadian tennis fans have been up until all hours because of the 16-hour time difference, watching the two Canadian men reach the latter stages of the first Grand Slam tournament of the season.

Auger-Aliassime hopes the Melbourne sunshine -- and the winning -- can be a bit of a distraction from all that's going on back home.

"With the very cold winter, the pandemic protocols and confinement, I hope we can put smiles on peoples' faces," he said.

He also hopes it sends a message about Canadian tennis.

"I hope it gives the idea to people back home that this is possible. I mean, we have done it. I truly believe that other Canadians can do that as well, even though we were not originally a tennis country," he said. "I think now we really are. We have shown that over and over again."