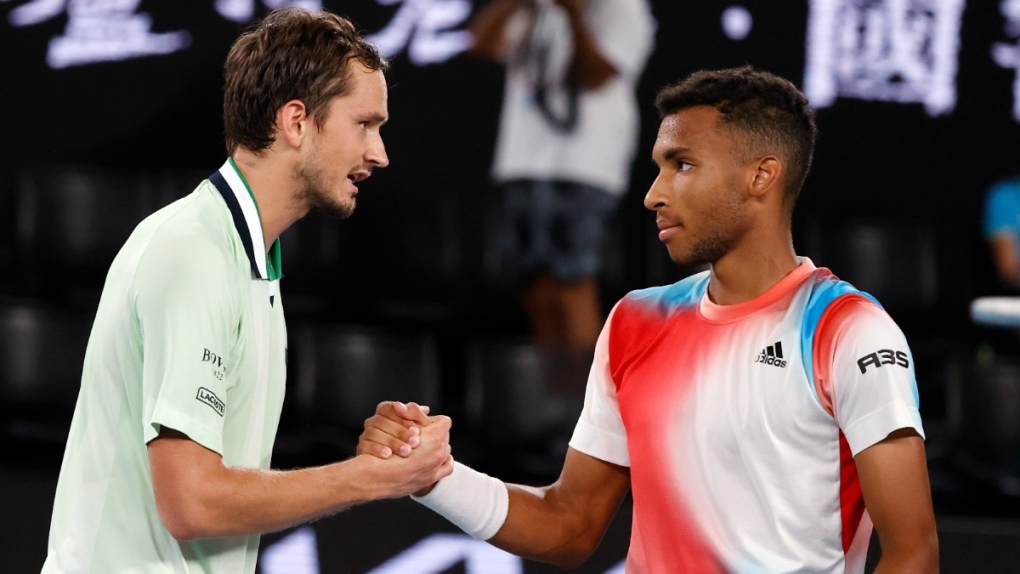 Felix Auger-Aliassime was one point away from a win over world No. 2 Daniil Medvedev and a spot in the Australian Open semifinals.

But the young Canadian couldn't finish the match off, and the Russian veteran made the most of his reprieve.

"You step on the court, you want to have no regrets. I can go back and think I wish I'd made different choices, or wish Daniil didn't play as well in certain moments, Auger-Aliassime said after the four hour, 42-minute quarterfinal marathon that ended early Thursday morning in Melbourne. "But, yeah, it was a good effort.

"At the end of the day, I can't regret the effort that I put in, and the chances I gave myself," he added. "Of course I would have loved to win. I love to win every time. It sucks to lose in the end, but that's life. I just need to accept it."

With the lion's share of support from a good crowd held down somewhat by government-imposed limits due to COVID-19, the 21-year-old from Montreal was in control for much of the early going.

A surprisingly erratic Medvedev looked subpar physically. An effortful grunt accompanied his every move, and he was sweating heavily. The 25-year-old had issues with everything from the crowd, to the editorial choices on the giant screens, to the moving roof atop Rod Laver Arena.

He was searching for solutions, and not finding any holes in Auger-Aliassime's game.

"I was not playing my best and Felix was playing unbelievable," Medvedev said during his on-court interview after the win. "He was serving unbelievable. He was all over me. I didn't really know what to do."

And then, a little rain changed everything -- at least for Medvedev.

With the Russian serving at 2-1 in the third-set tiebreak, there was a seven-minute delay as a brief shower led the retractable roof to be closed and the court dried off with towels by the ball kids.

Medvedev went off court briefly as Auger-Aliassime sat in his chair, muttering to himself.

The Russian returned and won five of the next points, and the third set.

"In the first set and in the tiebreak I was sweating like hell and made a few double faults, because my hand was really slippery," said Medvedev, who tried swapping out his wristbands for dry ones, but still couldn't get a good grip. "When they closed the roof, I felt the momentum changed and I felt like I could go through the ball better."

Once the air conditioning kicked in, the temperature inside Rod Laver Arena dropped a good 10 degrees. And that helped.

There was no rain for the rest of the match. But the roof remained closed.

Auger-Aliassime conceded that there were small moments of opportunity even before that tiebreak -- little openings that, if exploited, might have given him a straight-sets win.

The experienced champions recognize those moments, and put pedal to metal to finish things off. At 21, Auger-Aliassime is still learning.

Still, in the fourth set, serving to stay in the match at 4-5, Medvedev double-faulted and gifted the Canadian a match point.

And then he wrenched it away with a massive 213 km/hour serve -- his fastest of the night.

Medvedev was trying everything. Even then, Auger-Aliassime had opportunities to break early in the fifth set. But every time the door was slightly ajar Medvedev found a solution, or Auger-Aliassime couldn't quite make the play.

"I told myself: what would Novak (Djokovic) do?" said Medvedev, to a chorus of boos of the Melbourne crowd at the mere mention of the absent nine-time champion's name.

"That's what came to my mind, because he's one of the greatest champions -- and Rafa (Nadal) and Roger (Federer), to be honest," he added. "I'm going to make him work.

"If he wants to win it, he needs to fight for the last point."

Medvedev changed his return position from well beyond the Melbourne banner behind the baseline, moving up several metres into the court.

He wasted as little time as humanly possible between points on his serve -- a couple of times, he was ready to serve before chair umpire Damien Dumusois had even started the 25-second serve clock.

He gave no time for his opponent to get set for the return, and Auger-Aliassime's return effectiveness dropped.

Medvedev came into the net a lot more in the tiebreaks, and when he was behind.

Suddenly, none of the external distractions bothered him. He no longer looked as though he was struggling physically.

For Auger-Aliassime, who had a medical timeout at 2-3 in the fifth set to have some tape added to an already tightly wrapped right ankle, the plan in 2022 is to find the silver lining -- no matter what.

"It's no surprise (Medvedev) is where he is now. He fights, tries to find solutions. He plays well when he needs to," Auger-Aliassime said. "I think he was just a little bit more clutch than me -- a little bit more solid at times."

"It comes with experience as well, I think. But I'm looking forward to the next time I can put myself in that situation. I believe I can cross the line."

Auger-Aliassime was looking to reach his second straight Grand Slam semifinal. He made it to the final four of last year's U.S. Open, where he also lost to eventual champion Medvedev.

Still, the Montrealer has made it to at least the quarterfinals in his last three Grand Slams.

Medvedev is looking to become the first man in the Open era to win his first two Grand Slam titles in consecutive tournaments. He faces French Open runner-up Stefanos Tsitsipas on Friday.