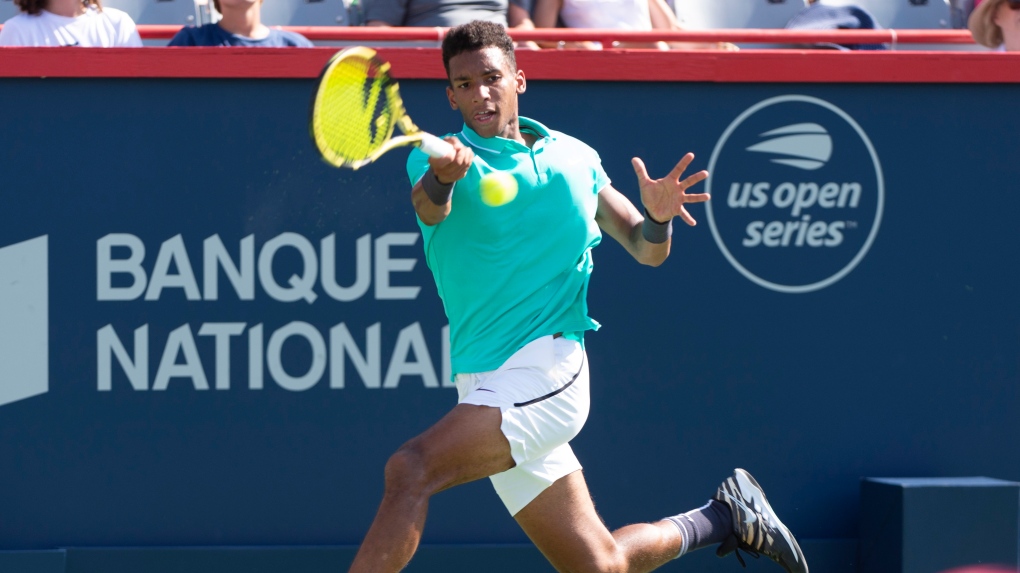 Felix Auger-Aliassime of Canada returns to Karen Khachanov of Russia during round of sixteen play at the Rogers Cup tennis tournament Thursday August 8, 2019 in Montreal. THE CANADIAN PRESS/Paul Chiasson

MONTREAL -- Felix Auger-Aliassime will look back fondly on his first hometown Rogers Cup.

The roar of an adoring the crowd, the wind in his sails -- quite literally at certain points -- and the thrill of winning on centre court.

Karen Khachanov defeated the Montreal teenager 6-7 (7), 7-5, 6-3 in third-round action at a blustery and raucous IGA Stadium on Thursday afternoon to abruptly end to a story that felt like it was just getting started.

A rising star celebrating his 19th birthday, Auger-Aliassime pushed ahead early and appeared to have the rattled No. 6 seed on the ropes, but was undone by 12 double faults and a series of mistakes at key times.

"For sure frustrated because it was a big occasion," he said. "There was a lot of expectations. It's tough to see it slip away, but there's a reason for that.

Victorious just six times prior to 2019, the world's 21st-ranked player and last remaining Canadian in the men's bracket has made three finals since February, but is still looking for his first title.

A francophone with a chance to hoist a trophy in Quebec was always going to get a lot of attention, and Auger-Aliassime said he felt that weight build throughout the week.

But he was unable to match Denis Shapovalov's magical run of two years ago when the then-18-year-old from Richmond Hill, Ont., made it all the way to the semifinals in Montreal.

"The pressure was enormous," Auger-Aliassime said. "I can't hide that."

Khachanov, meanwhile, now turns his focus to the quarterfinals of the US$5.7-million ATP Tour Masters 1000 series event, where the Russian will meet No. 3 seed Alexander Zverev after the German advanced with a 7-5, 5-7, 7-6 (5) decision over Georgia's Nikoloz Basilashvili.

"It was really a competitive match from both of us," Khachanov said. "Felix is a great player."

In other action, top-seed and world No. 2 Rafael Nadal, a four-time Rogers Cup champion, defeated Argentina's Guido Pella 6-3, 6-4 in Thursday's evening session. The 33-year-old Spaniard won last year's tournament in Toronto, the site of the women's bracket in 2019.

"A tough day in terms of wind," Nadal said. "But we are used to playing like this. When we play on outdoor courts, that's part of the game."

Other men moving onto the quarters are No. 2 seed Dominic Thiem of Austria, No. 7 Fabio Fognini of Italy, No. 8 seed Daniil Medvedev of Russia, No. 10 Roberto Bautista Agut of Spain and No. 16 Gael Monfils of France.

In front of a decidedly partisan gathering Thursday, Auger-Aliassime won a sloppy first set in gusty conditions that saw both players broken twice.

Tied 7-7 in the tiebreak, Khachanov sent a shot into the net on serve and then fired another ball over the second deck and out of the venue -- which was home to the Montreal Expos from 1969 to 1976 -- in frustration at the crowd cheering his mistakes, which led to loud boos.

"I cannot deny that I got a little bit crazy," said the Russian. "But I'm really a bit disappointed ... with the crowd as well. I don't have anything against it when they cheer for Felix. It's normal. He's the home favourite."

"I wish they could cheer the same way in Russia for me," Khachanov, 23, added with a smile. "But still, not when I miss or not wishing me to miss, screaming during the points. It's disrespectful."

Auger-Aliassime sealed the set on his next serve, much to the delight of his ear-splitting supporters.

"I've never heard a stadium yell like this, sound like this, have an atmosphere like this," he said. "It was incredible. At the changeover at 6-all, I could see the people there. I was raising my fist, and I felt energy coming up my legs.

"It was the first time I ever felt that."

After three breaks apiece in the second set -- thanks in large part to the wind swirling around the stadium -- Khachanov broke the Canadian for a fourth time to secure a 7-5 decision that evened the match.

Khachanov, ranked No. 8 in the world, broke Auger-Aliassime again to go up 3-1 in the third set.

The crowd favourite battled back to make it 4-2 as fans chanted his name, but Khachanov held serve despite going down 0-30 in the final game to seal the match in two hours 50 minutes.

Fans sang "Happy Birthday" to Auger-Aliassime after the competitors shook hands before a video featuring fellow pros -- including Khachanov -- passing on their greetings played on the big screens.

Auger-Aliassime, who started the year ranked 108th, advanced to Thursday's round of 16 thanks to victories in all-Canadian matchups with Vancouver's Vasek Pospisil and Milos Raonic of Thornhill, Ont.

Pospisil gave the teen all he could handle in their opener before Auger-Aliassime advanced following a third-set tiebreak Tuesday.

Raonic, the top-ranked Canadian at No. 19, was then forced to retire from their second-round match with things tied at one set apiece because of a back injury. Shapovalov, meanwhile, was also eliminated on Wednesday night.

Auger-Aliassime now begins preparations for the start of the U.S. Open at the end of the month, but said the experience of his first Rogers Cup in Montreal was positive -- even if it ended sooner than he would have liked.

"I broke the ice, so to speak," he said. "It's a big tournament for me. At the end I want to play well, I don't want to be disappointed.

"But I learned a lot this week. I learned how to know myself better. It's good for the rest of the season and for the following years."