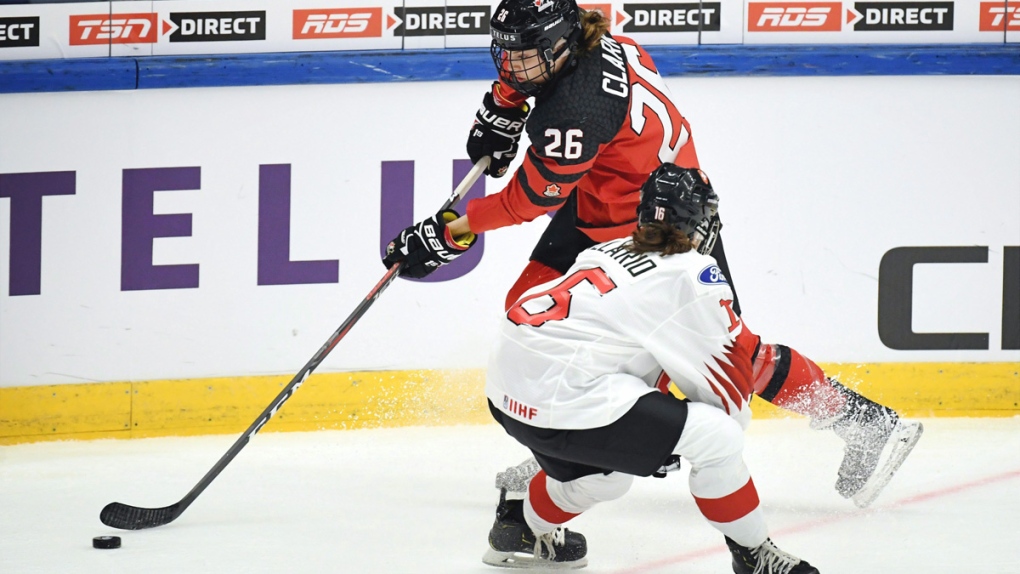 ESPOO, Finland -- Emily Clark scored a pair of goals for Canada in a 6-0 win over Switzerland to open the women's world hockey championship Thursday.

Natalie Spooner had a goal and an assist for Canada with Loren Gabel, Jamie Lee Rattray and Blayre Turnbull also scoring goals at Metro Areena. Defender Laura Fortino contributed a pair of assists.

Shannon Szabados made six saves in net for her 20th career shutout and 50th career win wearing the Maple Leaf.

Swiss goaltender Andrea Brandli turned away 41 shots in the loss.

Canadian captain Marie-Philip Poulin took part in warmup Thursday, but remained on the bench for the game.

Canada takes on defending champion United States on Saturday in Group A. The Swiss will play their second game in as many days Friday against Russia.

The women's world championship is a 10-country tournament for the first time.

All Group A teams and the top three from Group B will play quarterfinal games April 11.

The medal games are April 14, which also happens to be voting day for Finland's parliamentary elections.

She dressed for the Clarkson Cup final March 24, but remained on the bench in a 5-2 loss to the Calgary Inferno.

The 28-year-old forward from Beauceville, Que., skated twice with the Canadian team upon landing in Finland, but her status to start the tournament was said to be day-to-day.

Turnbull re-directed a Laura Fortino shot over Brandli's shoulder at 18:03 of the third period. Rattray scored Canada's fifth goal with a low snap shot through traffic from just inside the blue line at 12:54.

Clark scored at 1:35 and 7:43 of the third. The Saskatoon forward tipped a Jocelyne Larocque pass by Brandli for her second goal.

She shovelled the puck under the Swiss netminder in a goal-mouth scramble for her first. That goal was reviewed for goaltender interference and allowed to stand.

Gabel scored Canada's first goal of the tournament in her world championship debut.

The 21-year-old from Kitchener, Ont., struck at 9:08 of the first period and Spooner made it 2-0 just 16 seconds later. Both women beat Brandli's glove with wrist shots.

Carla MacLeod and current Canadian assistant coach Caroline Ouellette hold the record for the fastest two goals for Canada at a world championship.

Meanwhile, Germany upset Sweden 2-1 in a shootout in Group B. The Germans were the surprise of the 2017 world championship finishing fourth.

Canada met Switzerland at the world championship for the first time since 2013 in Ottawa.

The two countries squared off the following year at the Winter Olympics in Sochi, Russia, where the Swiss took the bronze medal after falling 3-1 to Canada in the semifinal.

Goaltender Florence Schelling, the MVP of the 2014 Olympic women's tournament, was an equalizer against favoured opponents, but she retired last year.

Brandli seems ready to take up the mantle, however. The 21-year-old Ohio State University goalie stopped all 18 shots she faced in the second period to hold Canada to a 2-0 lead heading into the third.