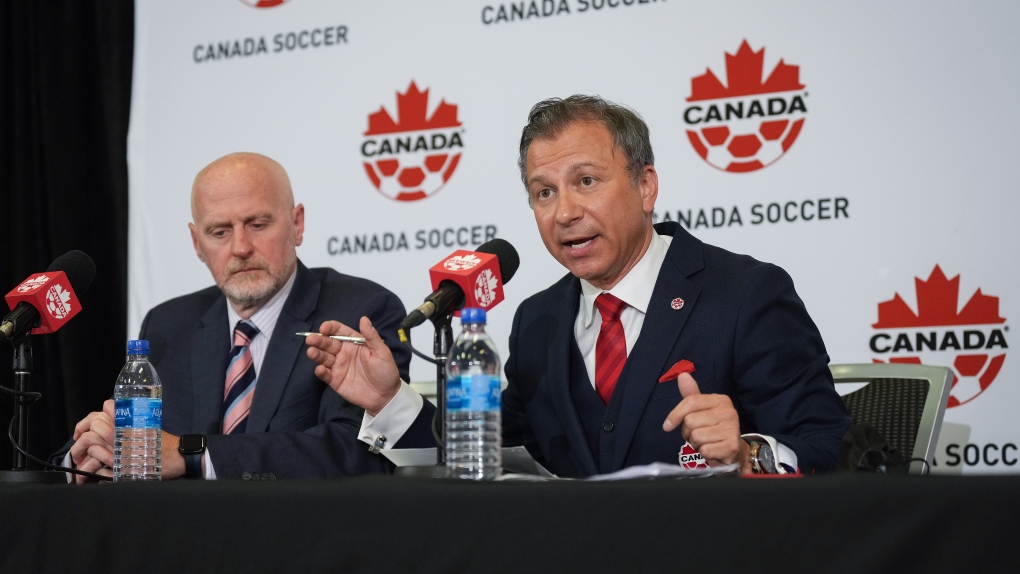 The players and their governing body are attempting to strike a deal in advance of the November World Cup in Qatar.

The men are following the lead of the Canadian women's team, which is represented by the Canadian Soccer Players Association (CSPA).

The news came in a release Thursday from Canada Soccer, which said it had "agreed to voluntarily recognize" the Canadian Men's National Soccer Team Players Association (CMNSTPA).

Canada Soccer said the association covers players who have been called into any men's national team camp since January 2021.

"It just streamlines things for us and make it easier ΓÇª We can have regular dialogue. We know where to go for answers and they know where to come (for) questions," he said in an interview.

"There's reason to be optimistic, based on the fact that they've made this step," he added. "And I think now it's just continuing what we were doing prior, getting to a point where we find an agreement and get this over the line well in advance of Qatar."

An attempt to reach the law firm representing the players wasn't immediately successful.

Canada Soccer is awaiting word on its latest offer, made to both the men and women in late June. At the time, it said it was looking "to equalize matters related to compensation for the player pool, travel policy, and the configuration of high-performance environments" between the two teams.

Cochrane said the two sides are going back and forth, asking and answering questions.

Qatar marks only Canada's second trip to the men's World Cup, following the 1986 tournament in Mexico where Canada exited after losses to France, Hungary and the Soviet Union.

And with FIFA paying out millions to competing teams, there is plenty at stake for the current crop of players.

Dissatisfaction over the state of negotiations caused the men to boycott a planned friendly against Panama in June in Vancouver, citing "unnecessarily prolonged" negotiations over a new contract. The players said they wanted a larger piece of World Cup prize money and a "comprehensive friends and family package" for the tournament.

They reportedly were asking for an after-tax payment equivalent to 40 per cent of the expected eight-figure World Cup payout.

The negotiations in June were handled by the players themselves, according to Canada Soccer. Now with the association in place, they can turn to legal representation with provincial labour laws coming into play.

There is a lot at stake.

Each qualified team also received US$1.5 million to cover preparation costs, meaning all teams were guaranteed at least US$9.5 million each for their participation.

Complicating matters is Canada Soccer's deal with Canada Soccer Business, which is in charge of all corporate partnerships and broadcast rights related to Canada Soccer's core assets, including its men's and women's national teams as well as the Canadian Premier League.

While FIFA prize money is separate from that deal, which was billed as a 10-year agreement when it was struck in 2018, other issues that touch on the national teams are included.

Cochrane said the discussions in June were solely on the division of FIFA prize money.

"But as you talk through these discussions, really what ultimately gets asked is where your revenue is coming from and how the players can reap the rewards of what they do on the field," he said. "And sometimes those conversations come out similar to the way the CSB one did."

Can that Canada Soccer Business deal be re-opened to facilitate an agreement?

"I can't really comment on it," said Cochrane. "We'll wait to see what the negotiations bear while we have them."

The Canadian men, currently ranked 43rd in the world, have friendlies scheduled against No. 49 Qatar on Sept. 23 and No. 13 Uruguay on Sept. 27, both in Vienna, in the last FIFA international window before heading to Qatar.

They also hope to have a match in Qatar before opening tournament play Nov. 23 against second-ranked Belgium.

Canada coach John Herdman says he has not been directly involved with the player negotiations. But it's clear he wants the issue wrapped up sooner than later.

"It's an area that I've fortunately (been) able to stay away from," he told The Canadian Press. "The organization (Canada Soccer) was able to position me to ensure that my relationship, the trust I've built with the players, wasn't impacted by these type of conversations.

"Hopefully there is progress. We really hope that we can just focus on football when we hit the September (FIFA) window. And I'll be having that conversation with my players. It's just such a critical window now to dial all our energy into our team connection and ultimately what we're doing on the field.

"There's no minute to wait now. There's not one piece of attention that we can give outside of getting our team functioning in the way that's going to have an impact at a World Cup."

This report by The Canadian Press was first published Aug, 11, 2022