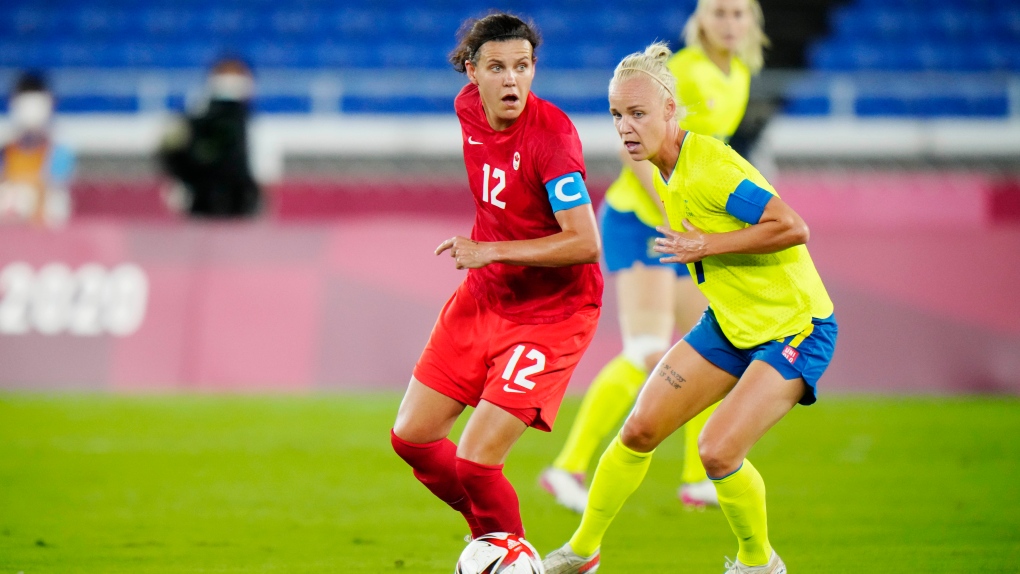 Canada's Christine Sinclair dribbles the ball in front of Sweden's Caroline Seger in the women's soccer final during the summer Tokyo Olympics in Yokohama, Japan on Friday, August 6, 2021. THE CANADIAN PRESS/Frank Gunn

Honoured by FIFA for her goal-scoring exploits Monday, Canada captain Christine Sinclair confirmed she has more to do on and off the soccer pitch.

The 38-year-old from Burnaby, B.C., the world's all-time leading scorer, has committed to playing the next two seasons with Portland and Canada leading up to the 2023 World Cup in Australia and New Zealand.

"I feel healthy, feel good," Sinclair told The Canadian Press. "And especially with the turnaround from the (Tokyo) Olympics to the (2023) World Cup -- there's qualifications this summer -- I told (coach) Bev (Priestman) that obviously I'll take it year by year, but to count me in.

"And then obviously here in Portland (with the NWSL Thorns), I want to do everything I can here to help continue to grow the game an grow this organization. I'm ready for a little bit more to go."

Asked whether that includes the 2024 Olympics in Paris, Sinclair replied: "I'm not guaranteeing that."

"One thing at a time," she added with a laugh.

Sinclair has not talked about retirement in the past. But she also had not specified how long she might continue to play.

Her bulging trophy cabinet got another piece of shiny hardware as the world governing body of soccer presented Sinclair with The Best FIFA Special Award during its Best FIFA Football Awards gala in Zurich.

Sinclair, who led Canada to Olympic gold in Tokyo last summer, has 188 goals in 308 international appearances. She also has 53 assists in Canadian colours.

Portugal's Cristiano Ronaldo, who holds the men's all-time scoring record with 115 goals (in 184 appearances), was also presented with The Best FIFA Special Award.

Sinclair, the leading international scorer among both women and men, opened by thanking her family for their support. And she said while wins are often quickly forgotten -- although she said she wouldn't forget the triumph in Tokyo -- other memories live on.

"What truly matters most are the moments I've shared and the connections that I've made," she said from Portland. "From celebrating with an entire country to experiencing the heartbreak of defeat with those closest to me.

"To all my teammates and staff members along the way, I hope you know how thankful I am for all of you. Together we've had the ultimate goal of inspiring generations and changing the sport in our country. I'd say we've accomplished that and more."

Sinclair's goals include bringing the professional women's game to Canada.

"It seems like the logical next step for soccer in our country," she said.

"We're so proud that you're able to represent Canada and the West coast of Canada the way you have," said Nash, a fellow B.C. native. "You 've inspired me, you've inspired my daughters, my family my sons. And you've been such an ambassador for the game not only in Canada but around the world."

"This is pretty remarkable, once-in-a-lifetime recognition from FIFA. It's kind of hard to put into words," she said. "And I'm sure it will be one of those things years down the road that I look back on and say 'That's pretty cool.' Especially being the first female to win it."

Sinclair has scored goals in 21 different countries and against 42 different opponents. Canada has won 76 per cent of the matches in which she has scored.

"The ultimate professional -- continues to inspire our country, our team and young players with big dreams," Priestman said on Twitter.

Sinclair was 16 when she made her senior debut March 12, 2000, becoming Canada's youngest-ever player at the time. She opened her scoring account one game later, beating star goalkeeper Bente Nordby in a 2-1 loss to Norway two days later at the Algarve Cup.

In December 2019, she was named the Canada Soccer player of the decade. Then-Canada Soccer president Steven Reed called Sinclair "a once-in-a-generation athlete that has been at the heart of Canadian sport for over 20 years."

Canada's flag-bearer at the London Olympics' closing ceremonies in 2012, the veteran forward is also the first soccer player appointed as an Officer of the Order of Canada and the first to have her name engraved on Canada's Walk of Fame.

She won WPS club titles with FC Gold Pride and the Western New York Flash in 2010 and '11 and the NWSL championship in 2013 and 2017 with Portland.