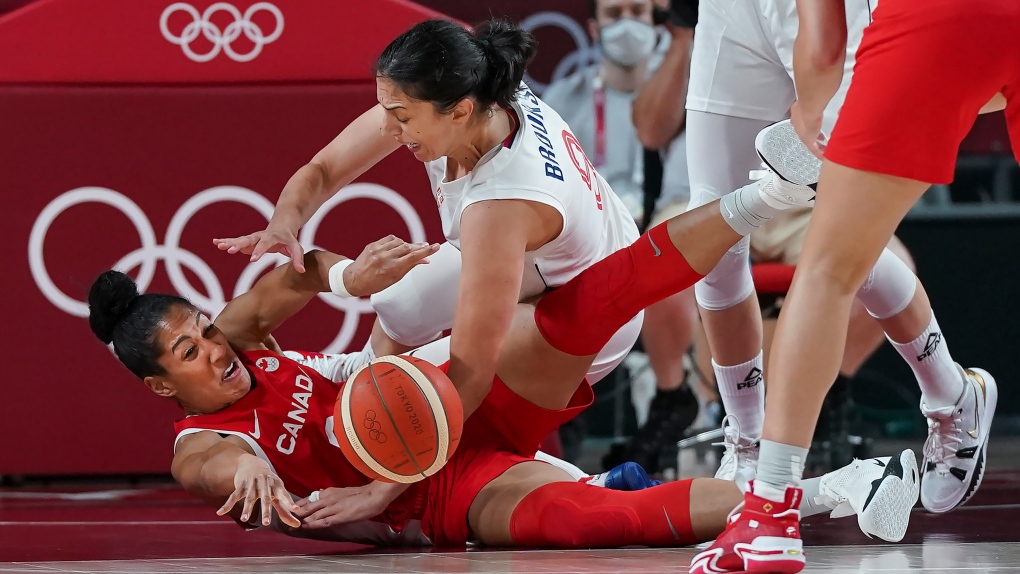 Their first game together in more than 17 months got off to a shaky start, with one missed shot after another.

Canada's women's basketball team arrived in Tokyo intent on climbing the medal podium for the first time in history, but now face a steeper path after a 72-68 loss to Serbia in Monday's opener.

If the rust of that long pandemic-induced layoff had something to do with Canada's sluggish start to the Tokyo Olympics, coach Lisa Thomaidis wasn't making any excuses.

"It'd been 17 months since, but we were working hard to do what we could despite the fact that we'd been remote for that amount of time," she said. "We're a team that does have a lot of experience playing together in previous years.

"There's no second chances here. So, we'll get it turned around. I think the second half was a good indication of how we want to play and we'll see that at the beginning of the next game."

Nirra Fields had a game-high 19 points, while Kia Nurse had 16 points and six rebounds for the Canadians, who had to dig themselves out of a double-digit first-half deficit because of poor shooting. Shay Colley added 12 points before leaving the game with an apparent right shoulder injury in the third quarter.

Despite forcing 28 Serbian turnovers and outrebounding their opponent on the offensive glass, the fourth-ranked Canadians were off target most of the night, going 5-for-24 from three-point range, and 38 per cent overall.

The Serbians, led by Sonja Vasic's 16 points, shot 8-of-17 from long distance.

Trailing by 11 points in the first half, a solid third quarter saw Canada lead briefly, and the two teams went into the fourth tied at 45-45.

Tied again with 4:25 to play, three consecutive Serbia three-pointers - including one from Aleksandra Crvendakic off an over-the-head no-look pass from Ana Dabovic - had the 2021 EuroBasket champions up by seven.

A Fields three-pointer sliced the difference to two with 51 seconds to play, but Dabovic scored the game-winner with two seconds to play to clinch the win.

"There's ebbs and flows in games and tournaments and our shots weren't falling," said Natalie Achonwa. "I think we did a better job in the second half of being more aggressive and dictating, so we weren't settling for as many shots and that's why you saw the flip in the score.

"And it starts on defence. We were just settling for shots because they were scoring and we were walking the ball down the court. But when we started to get stops, and we were aggressive on defence, it made our offence a lot easier."

Achonwa's presence was one of the bright spots for Canada after a sprained medial collateral ligament suffered a few weeks ago put her Olympics in doubt. The Minnesota Lynx forward, who missed the last 10 WNBA games before flying to Tokyo, wore a substantial brace on her knee Monday.

The Canadians face No. 19 South Korea on Thursday in the 12-team tournament, then face third-ranked Spain on Sunday. Spain held on to edge South Korea 73-69 in the earlier game Monday.

Only the top two teams in each group are guaranteed of moving on. Victories in both would help set Canada up for a more favourable opponent in the second round.

"Every game of the Olympics is pressure-packed," Thomaidis said. "We know that. We're here to win every one. So the approach doesn't change at all. Certainly Korea played Spain tight and we're aware of that. There've been a number of comments about the parity that is in the entire Olympic draw, and any team is capable of beating anyone else and so it's going to be important for us to respond and come up tough against Korea."

Canada's full team was playing together for the first since it qualified for the Olympics way back in February of 2020. The pandemic kept the players apart for the better part of the 18 months since, forced to connect via Zoom chats.

Most of the team finally gathered for camp in May in Tampa, Fla., setting up shop in the Toronto Raptors' temporary practice facility there. But the team's trio of Canada's WNBA players -- Nurse, Achonwa, and Bridget Carleton -- rejoined the team less than two weeks ago.

The Canadians' only official FIBA action since the start of the pandemic was a fourth-place finish at the FIBA AmeriCup regional tournament in Puerto Rico last month.

"This is a tough group to play in," she added. "The Olympic Games, it's anybody's game to win at any time. This is the best in the world for a reason, it's not supposed to be easy."

Canada shot just 28 per cent in the first half, and will lament the number of missed open looks. Colley's three-pointer a minute into the game was Canada's first basket -- and the Canadians wouldn't connect from long distance again until Colley's three with 6:57 to play in the third quarter, going 1-for-10 through the first half.

Nurse scored seven points in a pivotal third quarter for Canada, and when the Phoenix Mercury guard drove to the hoop for a layup with 1:59 left, the Canadians went up 42-40 -- their first lead of the game. Canada shot 42 per cent in the frame.

One negative on the night was the loss of Colley in the third quarter. Colley went down hard on her right shoulder when diving for a loose ball. She grimaced in pain on the sidelines while a member of Canada's medical staff attended to her the rest of the game.

"I'm not too sure (what her injury was), but it was a tough collision there between two pretty impressive athletes," Thomaidis said.

Because of Tokyo's state of emergency amid the pandemic, the game was played in front of no fans in what felt like a cavernous 37,000-seat Saitama Super Arena, about an hour's drive north of downtown Tokyo. Music played throughout the game, but there was no piped-in artificial fan noise.

The top two teams in each group are guaranteed spots in the quarterfinals. The two best third-place teams also advance, while the fourth-place teams are eliminated.

The Canadians lost in the quarter-finals at both the 2012 and 2016 Olympics, to eventual champion United States in 2012 in London, and then to France in '16.

A silver by Canada's men's team in 1936 is the country's only Olympic medal in the sport.

The Canadian men haven't played on the Olympic stage since 2000 in Sydney, losing to the Czech Republic in the semifinals of their last-chance qualifying tournament last month in Victoria.

This report by The Canadian Press was first published July 26, 2021.