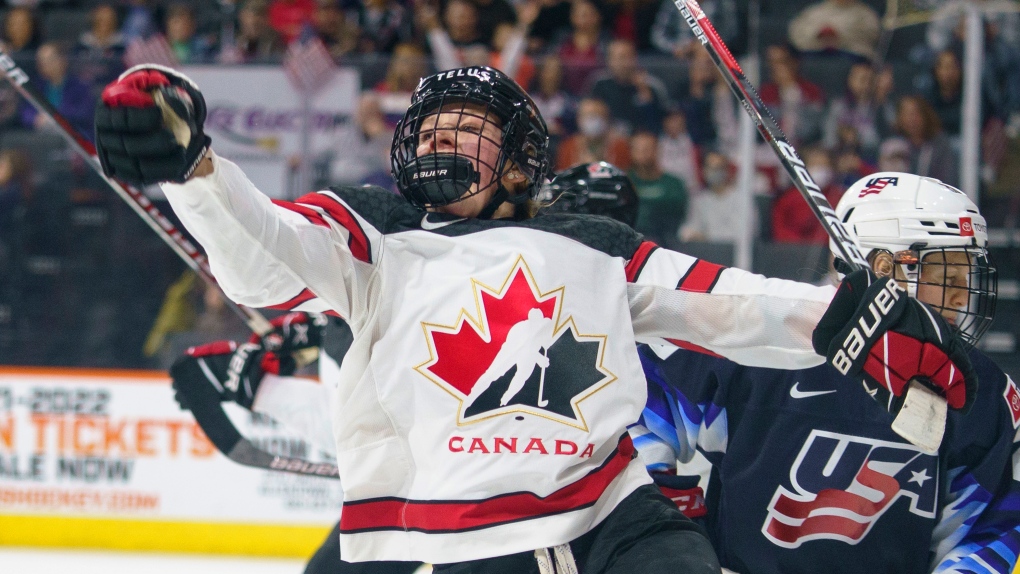 Canada's Sarah Fillier celebrates her goal against the United States during the first period of a hockey game Friday, Oct. 22, 2021, in Allentown, Pa. (AP Photo/Chris Szagola)

Emily Clark scored twice, including the go-ahead goal 5:05 into the third period, and Canada beat the United States 3-1 in Game 1 of a nine-game pre-Olympic Rivalry Series between the national women's hockey teams Friday night.

It was the first meeting between the cross-border rivals and world's top hockey powers since Canada's 3-2 overtime victory in the gold medal game of the women's world championships in Calgary, Alberta, on Aug. 31. The Canadians have won three straight meetings to mark their best streak since a five-game run before a 3-2 shootout loss in the gold-medal game at the 2018 Winter Games in South Korea.

Clark sealed the outcome with an empty-net goal, and Sarah Fillier also scored for Canada, which ended the Americans' run of winning five consecutive world titles in August. Emerance Maschmeyer stopped 28 shots, including 14 in the second period when the U.S. outshot Canada 15-3. Her best stop came 20 seconds after Clark scored, when she held her ground to turn aside Hayley Scamurra's backhander from in tight off a Canada turnover in its own end.

The teams will meet again in Hartford, Connecticut, on Monday night.

Clark's go-ahead goal came shortly after Canada's power-play unit failed to register a shot on net with Megan Bozek off for cross-checking. Ella Shelton set up the play by gaining the American blue line and turning around in the right circle to feed Clark, who's shot beat Cavallini through a screen and inside the near post.

The teams traded power-play goals through the first 40 minutes, with Canada opening the scoring on Fillier's 13:39 into the first period, and 29 seconds after Abby Roque was penalized for tripping.

Off the faceoff in the U.S. zone, Canada worked the puck back to Erin Ambrose, who's shot from the blue line was tipped in front by teammate Rebecca Johnston. Cavallini made the stop, but was unable to control the rebound, which dribbled to her left, where an untouched Fillier swept it into the open side.

Scamurra tied it 11:21 into the second period, when Maschmeyer stopped Caroline Harvey's point shot. Scamurra spun away from Renata Fast in front and roofed the rebound inside the crossbar.

Because of the coronavirus pandemic shutting down women's hockey for 18 months, the outing was Team USA's first against an international opponent on U.S. soil in 622 days, dating to a 4-3 overtime win over Canada in a rivalry series game played at Anaheim, California, on Feb. 8, 2020.

The first period wasn't over before the bad blood between the two teams became apparent with U.S. forward Hilary Knight exchanging shoves with Canada'a Melodie Daoust following a scramble in front of the Canadian net with three seconds remaining.

NOTES: U.S. G Maddie Rooney, who missed the world championship after suffering a lower body injury, is being eased back into action and not expected to play until the team travels to play a three-game series against Russia in Northern Ireland starting on Nov. 9. ... Canada D Blayre Turnbull, who broke her fibula during the gold-medal celerations in August, has resumed skating but there is no timetable for her return. ... U.S. captain Kendall Coyne Schofield played in her 150th international game, including the Under-18 and -22 levels.