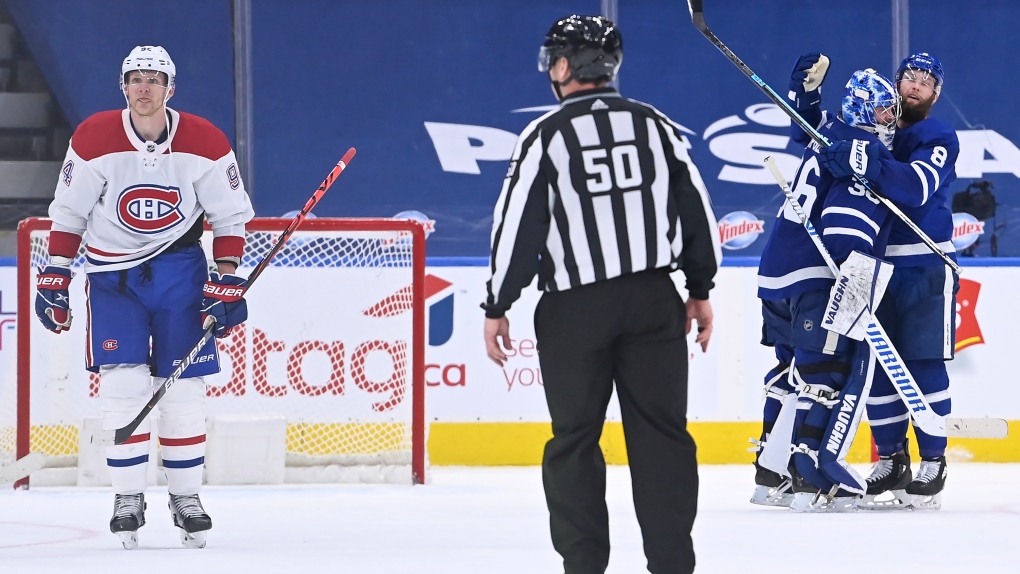 TORONTO -- Mitch Marner needed every one of his fingers to salute Jack Campbell's impressive accomplishment.

The Maple Leafs goalie made 32 saves for a franchise-record 10th straight victory Wednesday as Toronto defeated the Montreal Canadiens 3-2.

After being mobbed at the final buzzer in celebration, Campbell and Marner shared a special moment where the star winger counted off each win with a wide smile.

"He was being a great friend -- not even a teammate -- a true, great friend," Campbell said. "We have so many of those guys. We're a close-knit group.

"So happy for him," said Toronto centre Auston Matthews, who also flashed a big grin and had a private word with Campbell. "He's such an amazing person.

"He brings a lot of joy into everybody's lives in the locker room."

The 29-year-old former first-round pick experienced plenty of struggles early in his career, but has found a home in Toronto and is currently the team's No. 1 crease option with Frederik Andersen continuing to nurse a nagging lower-body injury.

"It's important to give Jack his moment," Leafs head coach Sheldon Keefe said of a player who's had to manage a sore leg most of the season. "He's been through a lot and worked extremely hard."

Matthews, with his NHL-best 28th of the campaign, and Zach Hyman had a goal and an assist each for Toronto (27-10-3), while T.J. Brodie scored his first in blue and white.

The Leafs, who have won five straight and are 8-0-1 over their last nine, now lead the Winnipeg Jets by seven points atop the Canadian-based North Division.

"It's close," Perry said of what separated the Original Six rivals. "We're right there. We've got to continue to push a little bit harder."

The Leafs, who improved to 9-1-1 when tied through two periods this season, were without William Nylander for the game due to exposure with a possible positive case of COVID-19. Alexander Barabanov took his place in the lineup.

Keefe said Toronto got word around noon there might be an issue with Nylander, and credited the winger for being up front about what was happening.

"Will didn't break any protocols or do anything outside of the rules," said the coach. "It's a very unfortunate situation."

After experiencing a COVID-19 shutdown last month that saw four games postponed with two players in the league's protocol for dealing with the coronavirus, the Canadiens were minus starting goalie Carey Price because of an undisclosed injury.

Montreal also announced Brendan Gallagher has been placed on long-term injured reserve with a fractured thumb suffered in Monday's 3-2 overtime victory against the Edmonton Oilers that will keep the gritty forward out of the lineup at least six weeks.

After the teams traded goals early Wednesday, Brodie scored his first with Toronto since signing in free agency at 2:32 of the third. Barabanov's shot that was going wide went off a couple players in front and right to Brodie for him to open his account.

"It took a little bit longer than I would have liked," said the defenceman. "But definitely you want it to mean something."

The Leafs had a couple of opportunities to make it 3-1 before Joel Edmundson came close at the other end on a shot that found iron.

Toronto eventually went up by two at 10:21 when Hyman banged home a Matthews rebound for his 13th. Perry scored his ninth with 2:15 left in regulation and Allen on the bench for an extra attacker to cut the deficit back to one, but Campbell and his teammates held on late to etch the goaltender's name in history.

"To win 10 in a row or just get one win is a big deal because it's a tough league," Campbell said. "You need everybody to win, and that's what we've been getting.

"It's super special and an honour and something I'll be able to look back on sometime, but right now it's just back to work and try and get better."

The Leafs, who improved to 4-1-0 against the Canadiens and will visit Montreal on Monday for the sixth of 10 meetings between the teams, opened the scoring 54 seconds into the first when Matthews fooled Allen on a wraparound with the night's first shot.

The Canadiens got back even shortly thereafter when Nick Suzuki delayed at the top of the slot and slid a pass down low to a wide-open Perry at 2:15.

Toronto's power play, which snapped an 0-for-29 stretch when Matthews scored the winner in Calgary on Monday, had a 5-on-3 look for 53 seconds later in the period, but were unable to find the range before Jake Muzzin hit the post with Montreal after the first penalty expired.

The Leafs held a distinct territorial edge in the first before the tables turned drastically when the teams returned for the second.

Campbell was under siege as the Canadiens held a 12-1 shot advantage until Toronto blue-liner Zach Bogosian tested Allen down low. Montreal's netminder then kicked out a John Tavares effort off a 2-on-1 before snagging Brodie's one-timer.

The Canadiens couldn't connect on their first power play when Matthews was whistled for roughing on Perry with under five minutes left. Campbell then denied Jonathan Drouin on a breakaway and Tyler Toffoli couldn't corral the rebound as the visitors outshot Toronto 17-4 in the middle period.

"Credit to our guys for not cracking under that pressure," Keefe said. "(Campbell) being in there and standing tall gives us a chance to gather ourselves."

Not unlike his nine previous starts in 2021.

This report by The Canadian Press was first published April 7, 2021.