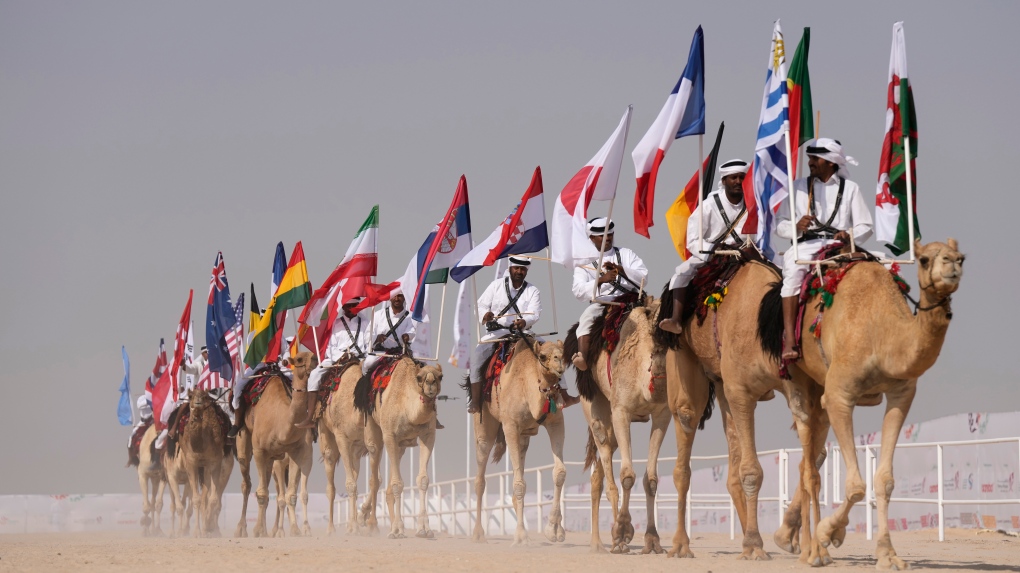 Like all good pageant contestants, Nazaa'a displayed not only dazzling beauty but also poise and grace.

She batted her eyelashes and flashed a toothy smile for the television cameras at the Mzayen World Cup, a pageant held in the Qatari desert about 15 miles (25 kilometres) away from Doha and soccer's World Cup.

Nazaa'a, mind you, is a camel.

Nazaa'a is a majestic light-haired creature that overcame several preliminary rounds and hundreds of other camels to win the pageant at Qatar Camel Mzayen Club on Friday.

The event, which was designed to bring cultural awareness to World Cup visitors, was sponsored by the Ministry of Sports and Youth, in conjunction with the Supreme Committee for Delivery and Legacy, the local World Cup organizing committee.

Nazaa'a was one of 15 camels who competed for the crown, parading by fans while wearing bejeweled collars and draped with strings of gemstones.

"I thought our camel was better than Ronaldo and Messi," joked Jassim al Kuwari, part of the family that owns Nazaa'a.

These events are held regularly throughout the Middle East, where the people have connected with camels for generations.

"This is our culture. This is from long time ago, from our fathers and grandfathers," Al Kuwari said. "Today is a competition, a beauty competition. We like these camels. We give them names. It's like a family."

Visitors were greeted by a camel jingle "Welcome to the Camel Competition" and served Karak, a spiced tea with milk. Owners and their families sat in an air-conditioned luxury tent with red velvet chairs and a glass wall to watch the competition.

The main attraction were the pure-bred female camels. Competitors makes several passes in front of a stand of fans that cheer for their favorite. There's also a milking competition, with the prize going to the camel that produces the most milk.

Make no mistake, this a serious contest: A doctor is on staff to make sure the animals don't use fillers or Botox to make them more beautiful. Last December dozens of camels were disqualified from the King Abdulaziz Camel Festival in Saudi Arabia for cosmetic enhancements.

Then there's the money: The winner, runner-up and third place camels all receive trophies. Nazaa's owners earned 200,000 Qatari riyals (US$55,000). The camel that produces the most milk wins 15,000 riyal.

"I have been with camels and their contests since I was a child," camel owner Hamad al Greissi said. "Camels were there before planes and cars. They were called the ships of the desert. after modern vehicles, the camels became less popular, but they still hold a big place in our culture."