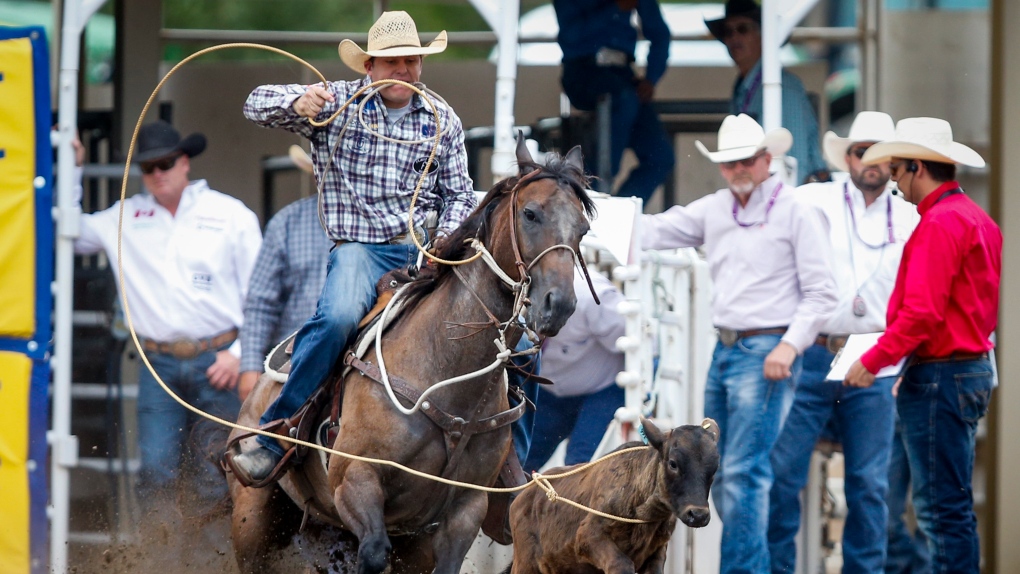 CALGARY -- Caleb Smidt took on and beat three former champions to win $100,000 on Showdown Sunday at the Calgary Stampede rodeo.

Smidt, from Bellville, Texas, won the tie-down roping title with a time of 7.3 seconds to edge out 2010 Stampede champion Matt Shiozawa, of Chubbock, Idaho, by 3/10ths of a second.

Cody Solomon of Prairie View, Texas, who won a pair of titles in Calgary in 2012 and 2017, finished third, while 2015 champ Timber Moore of Aubrey, Texas, placed fourth.

"Everybody here can rope, so it doesn't matter who's in there," said Smidt in regards to going up against such tough competition. "You've still got to go out there and be fast and do your job. I got to go last and knew what I had to beat and it all worked out."

Ten competitors in each of the six events qualified to compete on Sunday and only the top four from the first go-round advanced to the finals. The winner of each event was awarded $100,000, while the second-place finisher took home $25,000. Third and fourth spots paid out $15,000 and $10,000 respectively.

Sage Kimzey of Strong City, Okla., won his third bull riding title at the Stampede thanks to his 92.5-point ride atop Night Moves.

"I was really happy with the draw," said Kimzey, who first won in Calgary in 2015 and then added his second championship two years later when he also rode Night Moves to victory. "Night Moves always bucks really hard here. I was happy to have him by my name."

Jared Parsonage of Maple Creek, Sask., finished second behind Kimzey thanks to his 89-point ride aboard Grey Tower III to win $25,000.

Lisa Lockhart of Oelrichs, S.D., edged out Hailey Kinsel of Cotulla, Texas, to win the women's barrel racing finals by 3/1000ths of a second. Lockhart, who also won the event back in 2015, posted a time of 17.116 seconds before Kinsel stopped the clock in 17.119 to narrowly miss out on defending her Stampede title.

"I've been crying," said Lockhart. "My tears have finally stopped running. It means so much and I think the older you get, the more it means and it's not just about the money, it's about what transpires. I didn't expect this to happen. It's been a field of amazing competition this week. I was just glad to make it to today, let alone the final four."

Rusty Wright of Milford, Utah, finished first in the saddle bronc event by virtue of his impressive 92-point ride atop Get Smart. Wright's younger brother Ryder, who was the defending champion, finished in a tie for second spot with Zeke Thurston of Big Valley, Alta., who won three straight Stampede titles from 2015 to 2017.

"It's always nice to have family win it back-to-back," said Rusty, whose uncle Spencer Wright finished in fourth spot. "I honestly think that each of us wanted the other one to win. I was cheering super hard for Ryder. I honestly thought he was going to win the $100,000 again today because that horse he had (Wild Cherry) is so awesome."

"To come out with the victory is life changing," Aus said. "This is amazing. This is an incredible place to be. This committee works hard to make this rodeo special and this crowd's just phenomenal."

Kyle Irwin of Robertsdale, Ala., won his first steer wrestling title in Calgary by recording the top time of 3.8 seconds.

Although 2017 champion, Tyler Waguespack of Gonzales, La., stopped the clock in 3.4, he was assessed a 10-second penalty for breaking the barrier and wound up in fourth place behind Jacob Talley of Keatchie, La., and Will Lummus of West Point, Miss.

Later in the evening, Logan Gorst won his first GMC Rangeland Derby championship dash for cash. The 37-year-old driver from Meadow Lake, Sask., guided his chuckwagon around the Stampede Park track in a time of 1:10.87 to win $100,000.