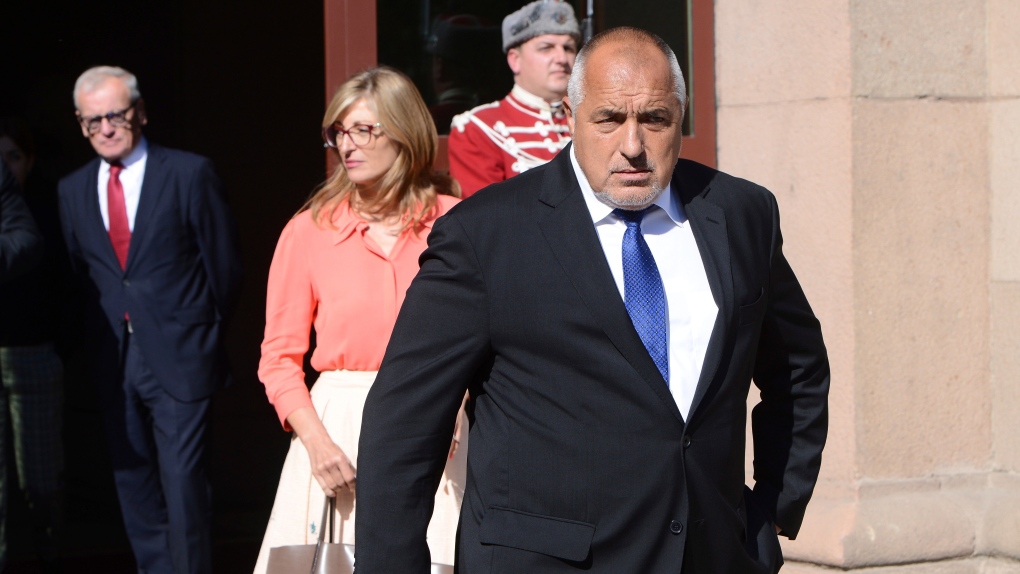 Prime Minister Boyko Borisov waves as he leaves Bulgarian President's office in Sofia, Bulgaria, Tuesday, Oct. 15, 2019. Criticized around Europe for the racist behavior of Bulgarian fans and under pressure from the country's prime minister following a run of poor results, the president of the country's soccer federation resigned on Tuesday. (AP Photo/Valentina Petrova)

The Bulgarian soccer federation, whose president also resigned Friday, said in a statement that Balakov was stepping down because "the performance of Bulgaria's men's national team was unsatisfactory in recent months."

It did not indicate if Balakov's decision was linked to the fallout from the racist abuse during Monday's European Championship qualifying match, which included Nazi salutes and monkey noises. The game was twice halted in an effort to stop the abuse.

Balakov said after the 6-0 loss that he had not heard the chanting, and he blamed England fans for taking part in "unacceptable behaviour" by whistling during the Bulgarian anthem before the game.

Borislav Mikhailov resigned as head of the federation but two vice-presidents declined to take over. Former vice-president Mikhail Kasabov has taken charge on a temporarily basis until a new governing body can be elected.

Also Friday, five more Bulgarian fans were detained and the interior ministry said police had so far identified 16 people believed to have taken part in the abuse.

"Five more men implicated in the abusive actions were detained this morning," the ministry said. "Police continues work to track down five more to detain them."

On Wednesday, six others were arrested. One of the six, who is 18 years old, has been indicted for "grave hooliganism" and could face up to five years in prison if found guilty. The five others were handed fines and banned from soccer matches.

A total of 78 fans have been detained during soccer matches in Sofia since the beginning of the year, police said. The majority of them have received one- or two-year bans from attending sports events in Bulgaria and abroad, fines and community work.