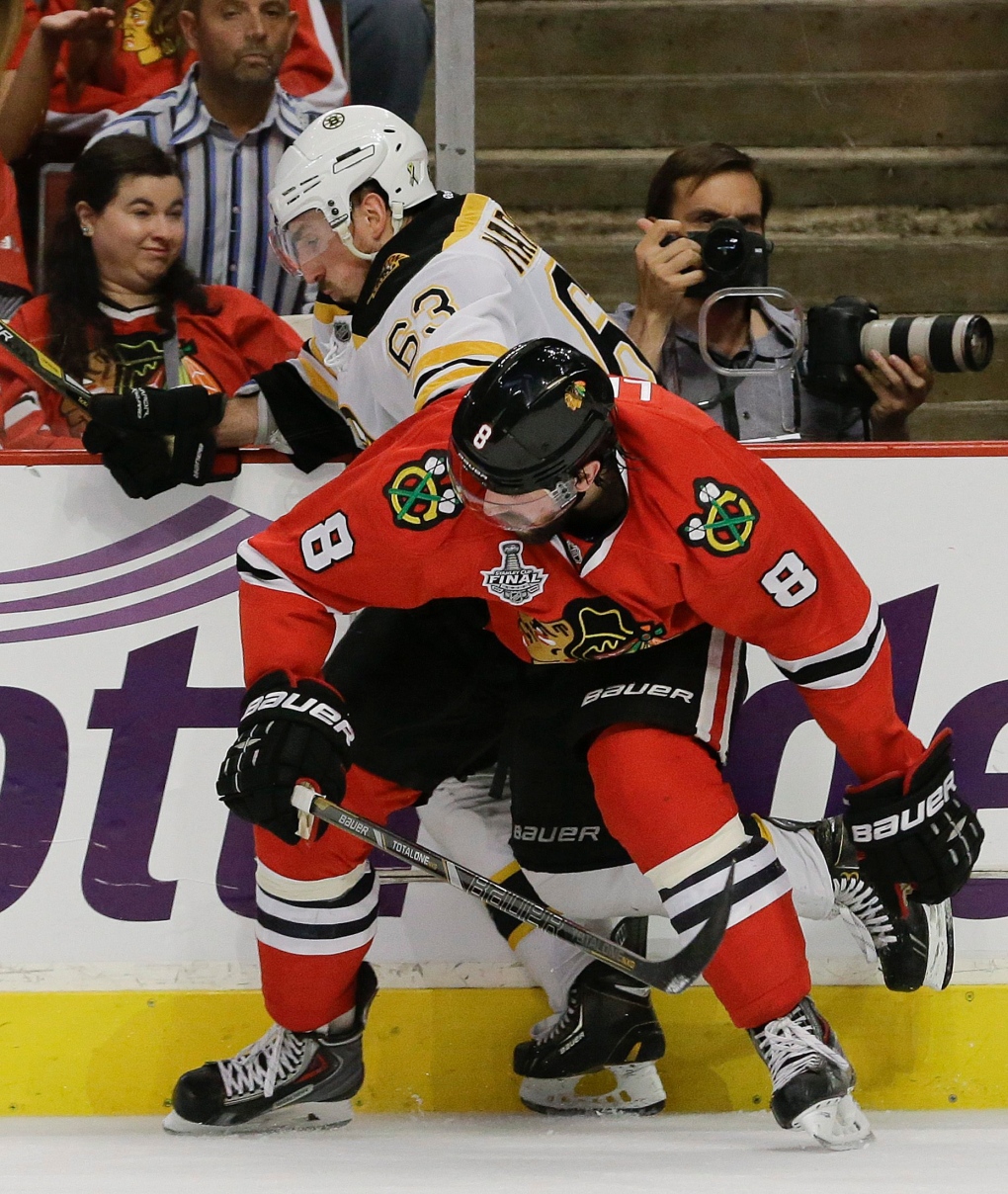 BOSTON -- Brad Marchand is known in Boston as the "Little Ball of Hate," a nickname that captures his stature -- he's listed at 5-foot-9 -- and his tendency to get on the nerves of opposing players.

An offensive threat who led the Bruins in scoring in the regular season, Marchand entered Monday night's Game 3 of the Stanley Cup finals tied for the team lead in penalty minutes.

But he's yet to get sent to the box in the finals against the Chicago Blackhawks.

"I haven't really tried to do a whole lot," he said. "I'm just trying to play the game. Everyone is so caught up in trying to antagonize guys and stuff like that; it just doesn't happen like that. It comes with the game and you have to react to different situations."

Marchand was asked after Monday morning's skate what the difference is between a dirty player and one who is just tough.

"When you're getting suspensions and stuff like that, that's playing dirty," he said. "You play hard, a lot of things happen in a game. But I don't think anybody is out there trying to injure guys."

"We know the style of hockey he wants to play, and we're not going to buy into the antics and the things he wants to try to pull on us out there," he said. "That's the best way to control a player like that, I guess."

YOUTHFUL TOEWS: In 2006, Jonathan Toews was an 18-year-old star waiting to be chosen near the top of the NHL draft. During the Stanley Cup finals that year, he was one of the leading prospects who attended a game, a practice the NHL began in 1994.

He was the third player drafted seven years ago, then won the cup with Chicago in 2010. Now, as captain of the Blackhawks, Toews has another chance in their series against the Boston Bruins. Before Game 3 on Monday night, with the series tied at one game apiece, four of the top prospects in the draft scheduled for June 30 visited TD Garden.

"It was a special one," Toews said of his visit to the series between the Carolina Hurricanes and Edmonton Oilers. "It's weird to think of 2006. The time has flown by."

The four prospects at Monday's game were defencemen Seth Jones of Portland of the Western Hockey League and Darnell Nurse of Sault Ste. Marie of the Ontario Hockey League, and two players from Halifax of the Quebec Major Junior Hockey League: centre Nathan MacKinnon and left wing Jonathan Drouin.

Other players in the series who attended Stanley Cup finals as prospects are Boston's Wade Redden in 1995, Nathan Horton in 2003, Tyler Seguin in 2010 and Dougie Hamilton in 2011 and Chicago's Patrick Kane in 2007.

Bollig played the first two games of the series because Quenneville wanted a more physical player against the hard-hitting Bruins. But after Bollig's turnover led to Daniel Paille's overtime goal in Boston's 2-1 win in Game 2 on Saturday night, Quenneville benched him. Stalberg had played 15 of Chicago's first 17 playoff games this year going into the Stanley Cup finals.

"I think we need some speed from him. I think we need energy. I think that he's a threat off the rush, in zone, defensively responsible," Quenneville said. "I think Bollig gave us a couple real strong games. You can talk about the last play. Certainly, you like the predictability of his game. I thought he did a nice job. Viktor, we're just looking for more, I think, offensively, defensively, giving us some more in both those areas."

NOT WHAT HE APPEARS TO BE: Bruins forward Chris Kelly is rarely in the spotlight and speaks quietly with reporters after games. But Boston coach Claude Julien says he's just the opposite around his teammates.

"He's subdued when he talks to you guys," Julien told reporters before Game 3 of the Stanley Cup finals Monday night. "There's no doubt in the dressing room, even on the ice, even practices, he does have a temper, a good temper. He's demanding, not just of himself, but everybody else around.

"I think everyone respects him that way," Julien said. "That's just his personality. He's a very intense individual, very demanding."

Kelly scored Boston's first goal in the 2-1 overtime victory that evened the series at one game apiece Saturday night.

MATCHING THE 'MADHOUSE ON MADISON': Bruins coach Claude Julien says he certainly respects the Chicago crowd, but he expected his own fans to turn into 'Causeway Crazies' as the series shifted to Boston for Games 3 and 4.

One of the Original Six teams -- along with the Blackhawks -- the Bruins play their home games in TD Garden on Causeway Street.

"Our fans are capable of doing the same thing," Julien said. "We may not hold as much in our building, but the decibels will be just as good as it was at the United Center."

Despite expecting a lot from the home crowd, Julien did praise the Chicago fans.

"Let's give credit where credit is due," he said. "It's pretty awesome when you go into that building and listen to them."