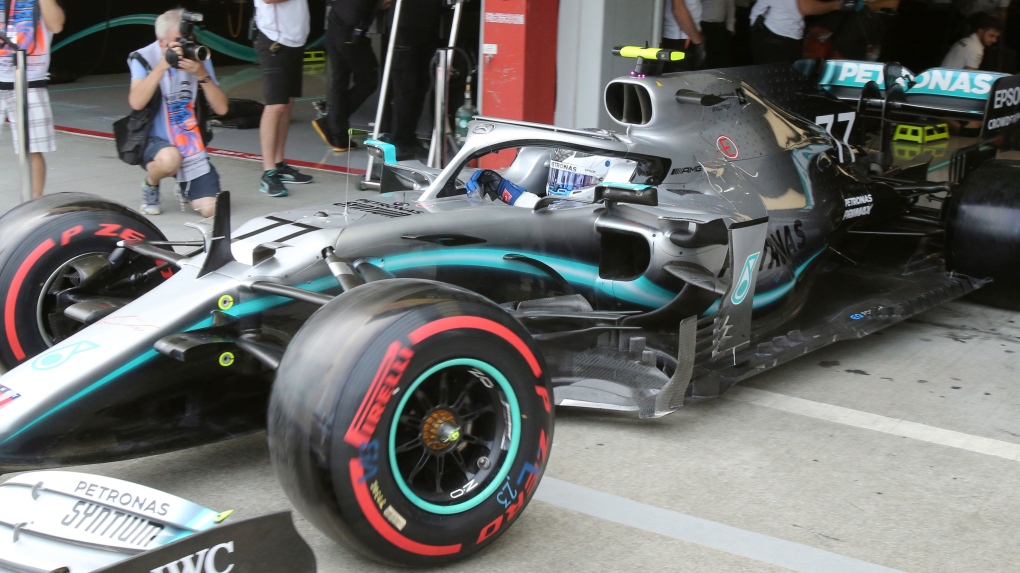 Mercedes driver Valtteri Bottas of Finland steers his car out of the garage during the first practice session for the Japanese Formula One Grand Prix at Suzuka Circuit in Suzuka, central Japan, Friday, Oct. 11, 2019. (AP Photo/Toru Takahashi)

SUZUKA, Japan -- Valtteri Bottas led the second and final practice session for the Japanese Grand Prix on Friday, edging teammate Lewis Hamilton in what could be the starting grid for Sunday's typhoon-hit Formula One race.

Organizers cancelled Saturday's usual qualifying session with Typhoon Hagibis set to hit Japan's main island on Saturday and Sunday. Plans call for the race to be run as scheduled on Sunday at 2 p.m., with qualifying held earlier in the day.

"The FIA and Formula One support this decision in the interest of safety for the spectators, competitors and everyone at the Suzuka Circuit," organizers said in a statement.

Rain was predicted on Friday at the 5.807-kilometre (3.608-mile) Suzuka circuit but both practices sessions were run in dry conditions.

Ferrari driver Sebastian Vettel led early but Bottas survived a slow speed spin earlier in the session and clocked a time of 1 minute, 27.785 seconds, 0.100 seconds ahead of Hamilton.

"We tried to do everything we could today in the session and prioritize," Bottas said. "We tried to be efficient with the time and I think we did the job. There is a lot of work to be done to analyze everything before the qualifying for Sunday morning, if it happens."

"I'm not worried about doing the qualifying and the race on Sunday as it won't affect my approach," Verstappen said. "We can't change the weather and it's out of our control so now we just have to see what happens on Sunday."

Hamilton has a commanding 73-point lead over Bottas with five races left in the season.

The Mercedes driver has won in Japan in four of the last five races. If Hamilton wins this weekend, he will equal Michael Schumacher's record for the highest number of wins at the Japanese GP with six.