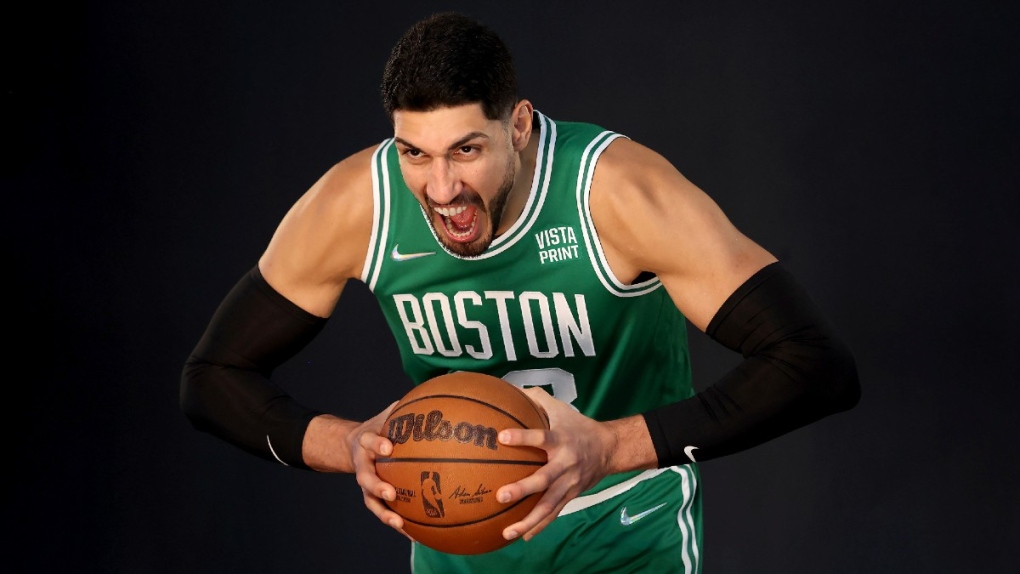 Kanter, who has a history of activism speaking out against his native Turkey's President Tayyip Erdogan, tweeted a two-minute video of himself expressing support for Tibet and wearing a T-shirt emblazoned with the image of the Dalai Lama, its exiled spiritual leader.

"I'm here to add my voice and speak out about what is happening in Tibet. Under the Chinese government's brutal rule, Tibetan people's basic rights and freedoms are non-existent," Kanter said in the video posted on Wednesday in U.S. time, along with text describing Xi as a "brutal dictator."

Kanter posted similar messages on his Instagram feed. On Wednesday during the game against the New York Knicks, he wore shoes emblazoned with the phrase "Free Tibet" made by Baidiucao, a dissident China-born cartoonist and artist based in Australia.

Kanter did not immediately respond to a request for comment. He did not play in the Celtics season opener, a double-overtime loss to the Knicks.

Kanter was pilloried on Chinese social media and his name appeared to be blocked on the popular Weibo messaging platform. Only a written timeline of his team's game was available on the Tencent platform.

Tencent did not immediately respond to a request for comment.

Chinese Foreign Ministry spokesman Wang Wenbin told a news briefing on Thursday that Kanter was "trying to get attention" and that his remarks "were not worth refuting."

"We will never accept those attacks to discredit Tibet's development and progress," he said.

Kanter's tweet also followed the Wednesday arrival of the Olympic torch in Beijing, whose scheduled hosting of the Winter Games in February 2022 has prompted calls for boycotts over Chinese treatment of Tibet, Uyghur Muslims and Hong Kong.

As of mid-Thursday in China, Kanter's Chinese-language surname and full name yielded only one search result, compared with multiple results earlier in the morning.

The New York Times reported that Celtics games were pulled from the Chinese internet.

Beijing has ruled the remote western region of Tibet since 1951, after its People's Liberation Army marched in and took control in what it calls a "peaceful liberation," and considers the Dalai Lama a separatist.

A Weibo fan page for the Boston Celtics with over 650,000 followers wrote that it would cease updating its social feed after Kanter's tweets.

"Any information on the team will cease to appear on this Weibo. Any behavior that undermines the harmony of the nation and the dignity of the motherland, we resolutely resist!" the page's administrator wrote.

On the Celtics' official Weibo page, more than 100 commentators left comments on Thursday criticizing the club and Kanter. Some called for him to be fired.

"I've been an old Celtics fan for more than 10 years. After Kanter did this, I won't support the Celtics team a single day any longer. Between my hobbies and my country, there's no comparison," wrote one commentator.

An outspoken critic of Turkish leader Erdogan, Kanter, 29, was indicted in his home country in 2018 on charges of belonging to an armed terrorist group, which he denies. Turkey, which revoked his passport, is seeking his extradition.

A handful of current and former American lawmakers and officials offered their support for Kanter on Thursday, including former U.S. Secretary of State Mike Pompeo.

"Good on @EnesKanter for standing up to the CCP and speaking truth to power," Pompeo said on social media. "This is what real courage looks like."

More than 150 Tibetan people have burned themselves alive!! — hoping that such an act would raise more awareness about Tibet.

I stand with my Tibetan brothers and sisters, and I support their calls for Freedom.#FreeTibet #FreedomShoes pic.twitter.com/MKxfs1l7GA