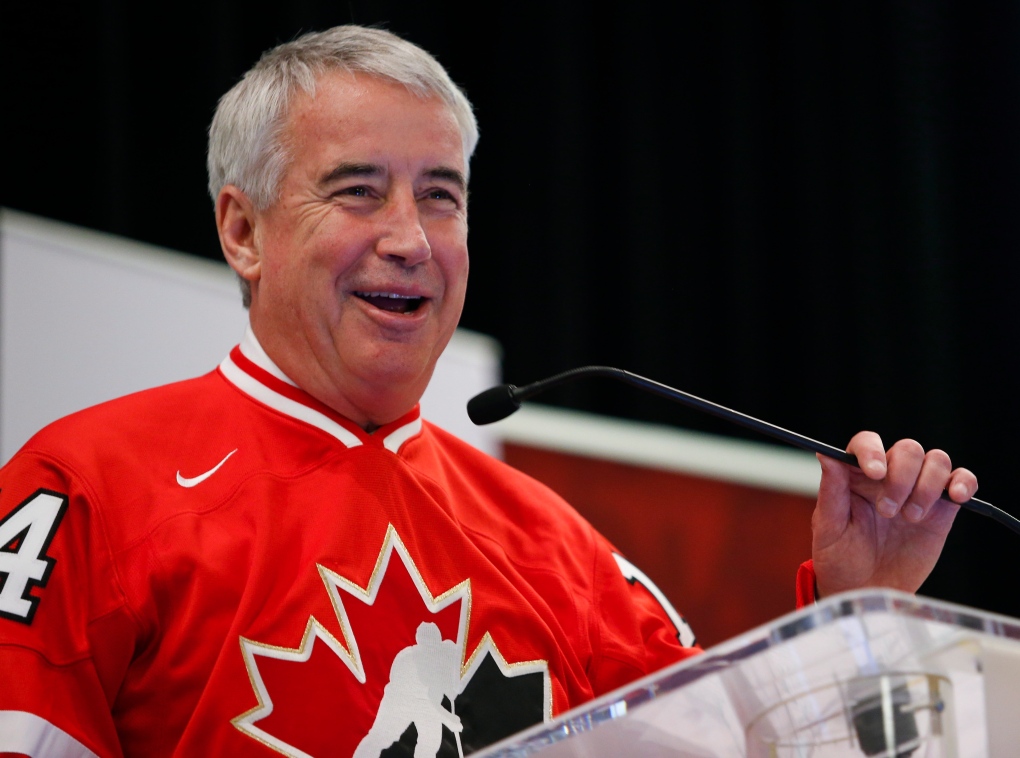 Hockey Canada president and CEO Bob Nicholson laughs while announcing his retirement at the organizations annual meeting in Calgary, Saturday, May 31, 2014.THE CANADIAN PRESS/Jeff McIntosh

CALGARY -- Bob Nicholson's advice to his successor at Hockey Canada is be as comfortable having a beer with a minor hockey coach in Kindersley, Sask., as you are in the New York office of NHL commissioner Gary Bettman.

From the 3,500 minor hockey associations across the country to the highest halls of hockey power, Nicholson's ability to establish, build and maintain connections turned Hockey Canada into a powerful sports organization.

After 16 years as president and chief executive officer, Nicholson's last day on the job was spent presiding over the organization's annual general meeting in Calgary.

His successor will be chosen by Hockey Canada's board of directors. It's a job of many moving parts that includes player, coach and official development programs, national teams, corporate sales and marketing, licensing, insurance, regulations and building consensus among 13 provincial branches.

"We need to figure out how to deal with new Canadians," he explained. "We need to be more flexible. We can't just register kids from September to April. We should have two or three hockey seasons.

There was a lot of that during Nicholson's tenure. The 60-year-old from Penticton, B.C., started with B.C. Hockey before joining Hockey Canada as vice-president in 1990.

Hockey Canada and the Canadian Amateur Hockey Association merged in 1994 and Nicholson became president in 1998.

"The reason there was a merger was both organizations were bankrupt," Nicholson recalled.

The non-profit organization is now an operation of approximately $45 million annually due in large part to marketing and packaging of Canada's passion, as well as turning the organization into a brand.

"The easiest way to describe that was when I started as president we had 20 staff and we have 127 staff today. Our budgets were $5 million total," Nicholson said. "We just really took the mark and built partnerships."

A prime example is the world men's under-20 hockey championship that is a major contributor to the coffers. Hockey Canada parlayed the annual tournament's growing popularity into lucrative sponsorships and a large television contract with TSN.

The money goes not only to Hockey Canada, but to the Canadian Hockey League that supplies a large number of players to the tournament as well as minor hockey associations who develop them.

Nicholson struck a deal with the International Ice Hockey Federation to bring the tournament to Canada every two years starting in 2015. It's also been held in Canada three of the last five years.

"The world juniors and the women's worlds, those are a real staple in this country and they're a big part of the tradition and also the financial side of it," Nicholson said.

Canada has won both men's and women's Olympic hockey gold in back-to-back Winter Games. The 2002 men's hockey team, assembled by Wayne Gretzky, won gold to end a 50-year drought at the Winter Olympics.

"Look at the people he's brought into our organization, whether it's high-end professional staff or people like Wayne Gretzky and Steve Yzerman," Hockey Canada chairman Jim Hornell said. "His capacity to bring people into our organization is huge and that will live on."

Nicholson has also been front and centre on thorny issues. In the wake of revelations that junior hockey coach Graham James sexually abused players, a Speak Out program was established in 1997 to help prevent abuse and bullying in sport.

When to introduce bodychecking in minor hockey has been a source of continual and fractious debate. Concussions in hockey are problematic for the long-term health of players.

Nicholson emphasized safety in his final address at the AGM.

"Everything you do, do it for the player," he said. "It's not about the turf you're representing or the area of the country you live in. Do what's best for the player. Player safety, those terms are all changing. We have to change with the time.

"I really believe when I look back 10 years from now, this organization is going to go to a whole other level. As long as you continue to focus on the players, making sure players play this game safe, Canada will always be the country that carries this game worldwide."

Establishing an initiation program to introduce children age five and six to hockey is part of Nicholson's legacy.

He also oversaw the move of Hockey Canada's headquarters from Father David Bauer Arena at the University of Calgary to the WinSport at Canada Olympic Park.

His first day off the job Sunday was to be spent golfing in Penticton. Nicholson will continue as a IIHF vice-president. Speculation is the NHL will come calling.

"I don't know," Nicholson said. "In fairness I've got a lot of options on my table. I told everyone I wasn't going to speak until June 1. I'm going to have to deal with some things and see where it goes."