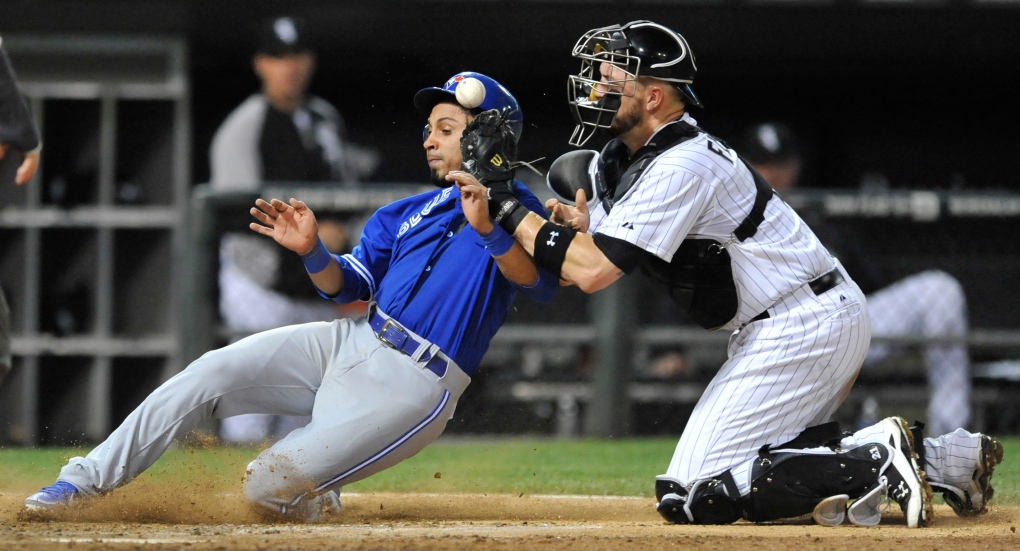 Bautista hit a game-tying home run in the ninth inning and Rajai Davis scored on a wild pitch in the 10th to lead the Blue Jays to a 7-5 win over the White Sox at a dimmed U.S. Cellular Field on Tuesday night.

Wang made his first start of the season after signing with the injury-riddled Blue Jays, lasting 7 1-3 innings while giving up five runs and 10 hits to help Toronto avoid a three-game losing streak.

"I thought he did a great job," Gibbons said. "He really did."

During the 10th, there was a brief delay after a handful of bulbs in the light standards above the infield at U.S. Cellular Field went out as Ramon Troncoso (0-1) prepared to throw his 2-1 pitch to Adam Lind. Following the delay, Davis scored on Troncoso's wild pitch.

Brett Cecil (2-0) went 1 2-3 innings for the win and Casey Janssen pitched a scoreless 10th for his 13th save in 14 tries, getting Adam Dunn to ground out with runners on first and second to end the game as the lights returned to full strength.

"It's baseball season. We're happy tonight and tomorrow's a new day," said Lind, who had three hits. "Another tough game tomorrow, their ace (Chris Sale) is on the mound so we know what we're in for."

Wang started the season at Triple-A Scranton/Wilkes-Barre in the Yankees' organization, but opted out of his minor league deal last Friday after going 4-4 with a 2.33 ERA in nine starts.

Wang has spent seven seasons in the major leagues, five with the Yankees, but last started at least 15 games in 2008. Tuesday was only his 26th start since then because of a series of injuries.

Before Tuesday, Wang hadn't pitched in any game since June 1, when he threw seven shutout innings against Durham. His previous major league start was Sept. 23 against the Brewers, and his last win was June 12 of last year against the Blue Jays, when he was with the Washington Nationals.

Manager John Gibbons said Wang will get another start for the Blue Jays.

To make room for Wang, the Blue Jays designated IF Andy LaRoche for assignment. LaRoche was 1 for 4 in one game with the Blue Jays.

Before Tuesday, Blue Jays relievers had thrown 18 innings over their last three games, including 11 during their 4-3 18-inning win Saturday over Texas.

Wang struggled through the fourth, allowing five runs to fall behind 5-2, but settled in and gave the bullpen a rest. He escaped a bases-loaded jam with no outs in the fifth by striking out Paul Konerko and getting Dunn to line into a double play.

"I'm very happy to be back and thank you to the Blue Jays for giving me a chance and opportunity to play baseball in the major leagues," Wang said.

The White Sox, meanwhile, gave Toronto ample chances to get back into the game.

They also made mistakes on the bases. Dayan Viciedo got caught stealing in the second, Alejandro De Aza was picked off first in the third, Gordon Beckham was thrown out at third by Bautista in the fourth and Ramirez was doubled off second in the fifth on Dunn's liner.

"We kept shooting ourselves in the foot running the bases," Chicago manager Robin Ventura said. "Any time you lose like that it doesn't feel good."

Jose Quintana pitched 6 1-3 innings, giving up four runs (two earned) and six hits while striking out five to leave with a chance for his first win since May 21. Dunn hit a solo home run, his 17th of the year, and Conor Gillaspie hit a three-run homer off Wang in the fourth to give Chicago a 5-2 lead.

Even after Edwin Encarnacion's two-run home run in the fifth cut the White Sox lead to 5-4, Chicago was one out from a win until Bautista connected off closer Addison Reed.

"I felt great out there," Reed said. "One bad pitch and the next thing you know it, tie ballgame."