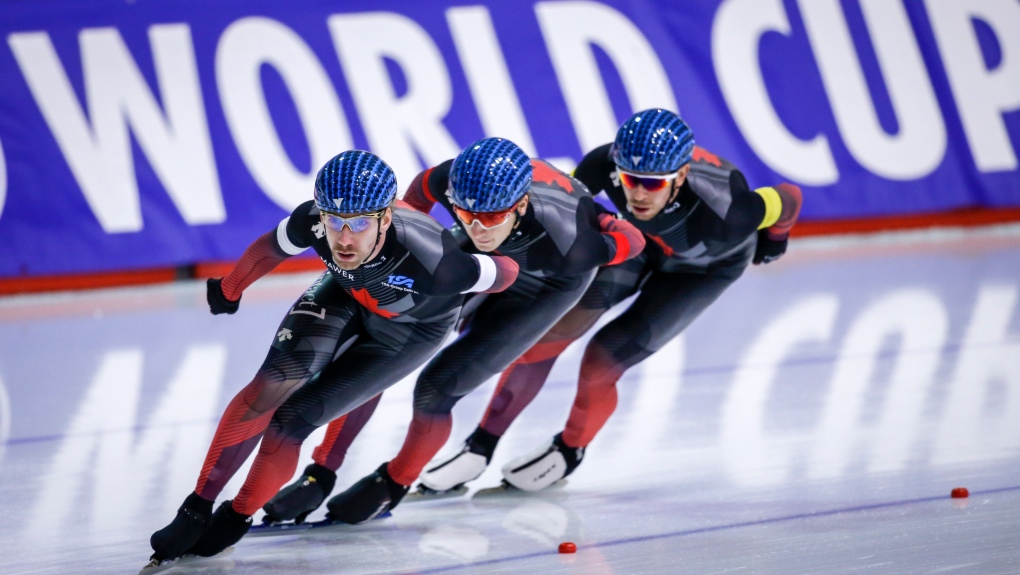 The 16 skaters were selected based on rankings from four World Cup events in November and December.

A planned skate-off for the final Olympic berths at Quebec City's new indoor oval Dec. 27-31 was cancelled due to the surge of the COVID-19 Omicron variant in that province.

Eight men and eight women will race the Maple Leaf at Beijing's National Speed Skating Oval, also known as The Ice Ribbon, which is short of the maximum quota of nine athletes per gender per country.

"Once we realized the speed this variant was moving in Canada, it really did not seem feasible to move it to another place at all, and cancelling was the safest option for our whole Olympic team," Auch said Tuesday during a video media conference.

Calgary's Bloemen is the reigning Olympic champion in the men's 10,000 metres and Dubreuil of Levis, Que., won last year's 500 metres at the world championship.

The skaters began isolating themselves Jan. 10 ahead of the team's Jan. 26 departure for China. Anyone travelling to Beijing for the Olympic Games must produce two negative pre-departure tests to board a plane.

"It can add a little bit of stress," said Ivanie Blondin, who will compete in her third Olympic Games. "I was actually just told, the best we can do as athletes is just focus on the task we need to do and try not to stress about the things on the outside.

"I think once we'll all be in China, it'll be a little more comfortable."

"That's been quite challenging. We haven't been able to get together with family and friends and really enjoy that moment," said Isabelle Weidemann.

"We're just trying to find the small pieces of joy and ensure that we keep it fun. We're stuck in a bubble, but we're also going to the Olympics, so it's very exciting."

Bloemen won both of Canada's speedskating medals four years ago in Pyeongchang, South Korea, with gold in the 10k and silver in the 5k.

Blondin is a two-time world champion in the women's mass start and Weidemann currently tops the World Cup standings in women's distance racing.

Blondin and Weidemann, both from Ottawa, and Valerie Maltais of Saguenay, Que., are medal contenders in team pursuit.

In addition to the pandemic curtailing training in 2020, a mechanical failure at Calgary's oval left the speedskaters without any ice to skate on at their national training centre for nine months between September, 2020 and June, 2021.

"We've been able to do enough training last year when we couldn't skate on proper ice to still roughly maintain our fitness and our strength," Bloemen said.

"When we got back on the ice this summer, we just had enough time to build back up and approach this season like any other season really. The way I see it, it hasn't been a problem at all."

Canada's long-track speedskaters have produced a total of 37 Winter Olympics medals dating back to 1924, including nine gold.