Blackhawks F Khaira taken off on stretcher after Trouba hit 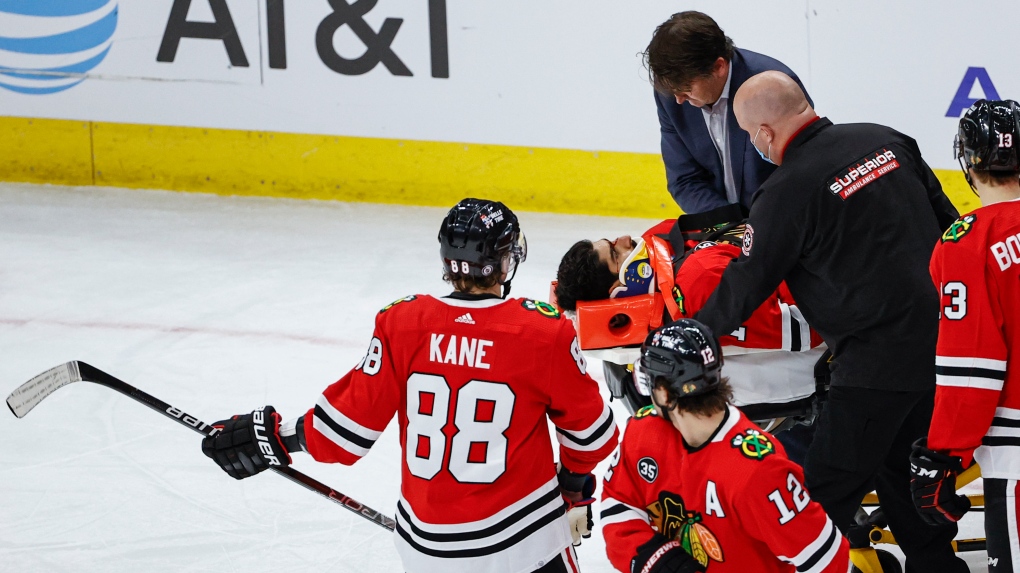 Chicago Blackhawks centre Jujhar Khaira (16) leaves the ice on a stretcher after being knocked out by New York Rangers defenseman Jacob Trouba during the second period of an NHL hockey game, Tuesday, Dec. 7, 2021, in Chicago. (AP Photo/Kamil Krzaczynski)
CHICAGO -

Chicago Blackhawks forward Jujhar Khaira was stretchered off the ice after he was levelled by New York Rangers defenseman Jacob Trouba on Tuesday night.

The Blackhawks said Khaira suffered an "upper-body blow" and was taken by ambulance to Northwestern Hospital for further testing.

Khaira's head was down as he gathered in the puck 6:10 into the second period, and Trouba appeared to drive his right shoulder into his chin. Khaira's head bounced hard off the ice, and there was no sign of any movement as the Blackhawks and Rangers scuffled nearby.

A stretcher was wheeled onto the ice, and medical personnel worked on Khaira as each team looked on from the bench area. A handful of his teammates and the Rangers tapped the stretcher as Khaira was taken off.

The 27-year-old Khaira has two goals and no assists in 17 games in his first season with the Blackhawks.