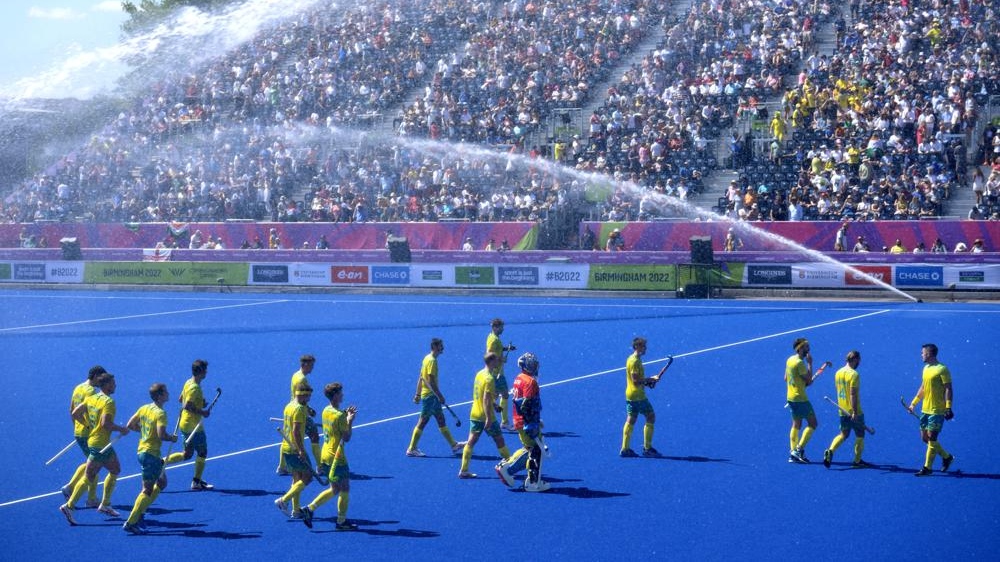 Team Australia walk on the pitch during at break in the men's final hockey match between Australia and India at the Commonwealth Games in Birmingham, England, Monday, Aug. 8, 2022. (AP Photo/Aijaz Rahi)
BIRMINGHAM, England -

Birmingham has proven itself capable of hosting major sporting events, including the Olympics, the chief executive of this year's Commonwealth Games said Monday.

However, Ian Reid said the city would be best-placed to co-host a global event like the Olympics as part of a multi-pronged bid with other cities in Britain.

"What I would say is that the people of Birmingham and the venues here have shown it could certainly be part of an Olympic bid," Reid said. "Whether the city has the capacity to host the full Olympics in the region, I'm not sure. We need to look at the detail.

"But I think if it was part of a wider bid, perhaps with other cities in the country, then Birmingham would certainly be a major, major part of that. The venues are world class. There is a huge amount of experience here. The volunteers have been excellent. The ambition is certainly here."

Speaking at Arena Birmingham, Reid was responding to comments from British sports minister Nigel Huddleston, who praised the city's handling of the event.

Birmingham was given the opportunity when the Commonwealth Games Foundation stripped the initial host city Durban of the rights in 2017. That shortened the window Birmingham had to prepare for the multi-sports competition with its more than 5,000 para and able-bodied athletes.

More than 1.5 million tickets were sold for the 12-day competition, which concludes on Monday, amid reports of television rating spikes in countries including Australia.

Officials from both the 2024 Paris Olympics and 2028 Los Angeles Games have been in the city throughout the competition assessing the methods used by organizers.

Representatives from the Australian state of Victoria, which will host the 2026 Commonwealth Games across several regional cities, have also been in attendance.

While the majority of events were based in Birmingham, nearby villages hosted sports including lawn bowling and road cycling, while the track cycling was held in London.

"It's been absolutely fantastic. This was Birmingham's time to shine and they have absolutely embraced it and taken it," Huddleston told Britain's Press Association. "So, definitely, one of the elements of legacy is thinking about how we can use the facilities and the experience to bid for other major international sporting events. I don't think it is an unrealistic ambition to say that the Olympics could be one of them.

"Of course, there has been a trend for multi-city bids in lots of international sporting events and, again, Birmingham will absolutely be in that mix going forward, because it has showcased itself in an incredibly professional way."

Victoria has even less time to prepare for the next Commonwealth Games, with its bid only approved this year, though cities including Geelong, Ballarat and Bendigo have strong existing infrastructure.

Commonwealth Games Federation chief executive Katie Sadleir said the Birmingham crowds are comparable to the successful event hosted by Melbourne in 2006 and raised confidence about the future of the competition.

She has held informal talks with representatives from "three to four" nations about editions from 2030 onwards with a view to giving future hosts more time to prepare.

"My gut feeling is (we will) look for board approval and we will come out in the first quarter and we will most likely look for 2030 and 2034 because of the nature of the discussions that we have been having," she said.

"Not everyone can pull off what Birmingham has done and Victoria is about to do in a very short lead time in terms of staging a spectacular Games. And because we've opened up the hosting model to be quite flexible and innovative, for some it will take longer than a three-and-a-half year or four-year window to pull something off."