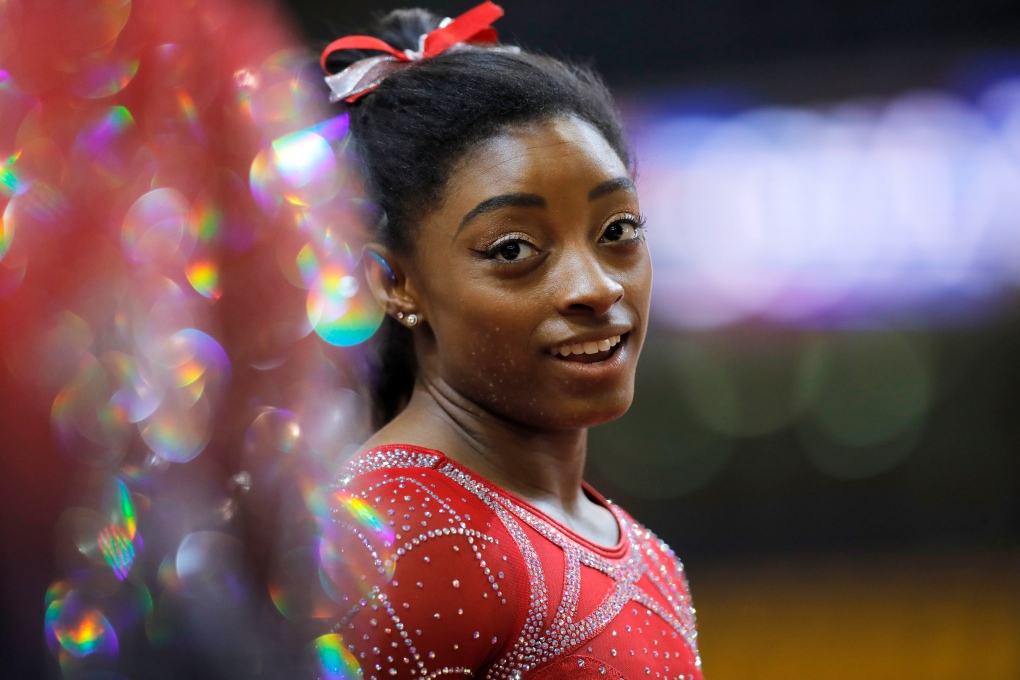 In this Nov. 2, 2018, file photo, Simone Biles talks to other gymnasts as she warms up on the second and last day of the apparatus finals of the Gymnastics World Championships at the Aspire Dome in Doha, Qatar. . (AP Photo/Vadim Ghirda, FIle)

LOUISVILLE, Ky. -- Simone Biles is always about taking it a step forward. Often, it's a huge leap.

With the Olympic Games in Tokyo just over a year away, the world's best gymnast believes her top-flight routine can always use a new wrinkle to stay ahead of her competitors. Such as tweeting out video of a punch layout front added to her signature move, "The Biles," a double layout with a half turn on the second flip.

Biles is expected to bust the move during this weekend's GK U.S. Classic. If nothing else, the event allows possibilities to experiment with something new as she tries to keep her edge.

"It's exciting, but it's also different," Biles said Friday before a media scrum following a two-hour workout. "If you're not looking forward to something, you don't push yourself. I think it's important so you're not just at a static (point) all year long.

"We have to come out and compete and show everybody what we've been working on and try to prove to ourselves that we can do it as well."

Doing it well isn't a question for Biles, 22, the most decorated U.S. women's gymnast. She owns 25 Olympic or World Championship medals, including a record 14 golds. That haul includes the 2016 Olympic all-around title, one of four golds won in Rio de Janeiro.

Biles is the obvious focal point of this weekend's U.S. Classic, the final tuneup before next month's nationals in Kansas City. The events will mark her only stateside appearances in 2019, and she aims to show improved routines in both.

Though the Spring, Texas native again figures to raise the bar for her own benefit, Biles is mindful of how younger, hungry challengers are eager to pounce on any vulnerability she might show. That's expecting a lot given Biles' more-chiseled physique than 2016 and her uncanny displays of athleticism and acrobatics while flying at full speed.

Not to mention her drive not to let anyone get close in any exercise.

"This is why I keep pushing her every day and why she keeps listening to me," jokes Laurent Landi, who coaches Biles along with his wife, Cecile. "She cannot think about the competition, she has to think about pushing herself to where Simone Biles can be the best gym gymnast she can be in 2020.

"Whether it's better or worse than 2016 doesn't really matter. It's just the moment that she needs to be at her personal best, and if she does that, she's going to be ahead of everybody else."

Biles added, "I actually never really pay attention to the gap because I feel like everyone is up and coming and they're adding difficulty to (routines) to try to catch up. It's really exciting because it always motivates me and everyone."

For what it's worth, her U.S. competitors will focus on honing their own skills at the U.S. Classic rather than thinking of chasing Biles.

It's a strong group for sure. Morgan Hurd won the 2017 World Championship while Biles took a long-deserved break, and finished third behind her in 2018. Riley McCusker was on that gold medal-winning team as well last year, and also looks to make gains this weekend -- all while marveling at the example Biles continues setting on and off the floor.

"Simone is just incredible," McCusker said. "It's amazing watching her. When I see some of the things she does, I'm just like, 'Oh, my gosh, that was amazing.' It's great to just be like alongside her in this."

Health-wise, Biles feels in a good place. Sure, there are plenty of aches and pains, and her coach is closely monitoring some nagging back issues. But Biles practiced Friday at the KFC Yum! Center without wraps on her wrists and ankles and appears ready to show how fresh she is.

"I have to pay attention to my body and take care of it a little bit more than I have in the past year just because I do a lot more work. I just have to balance it all."