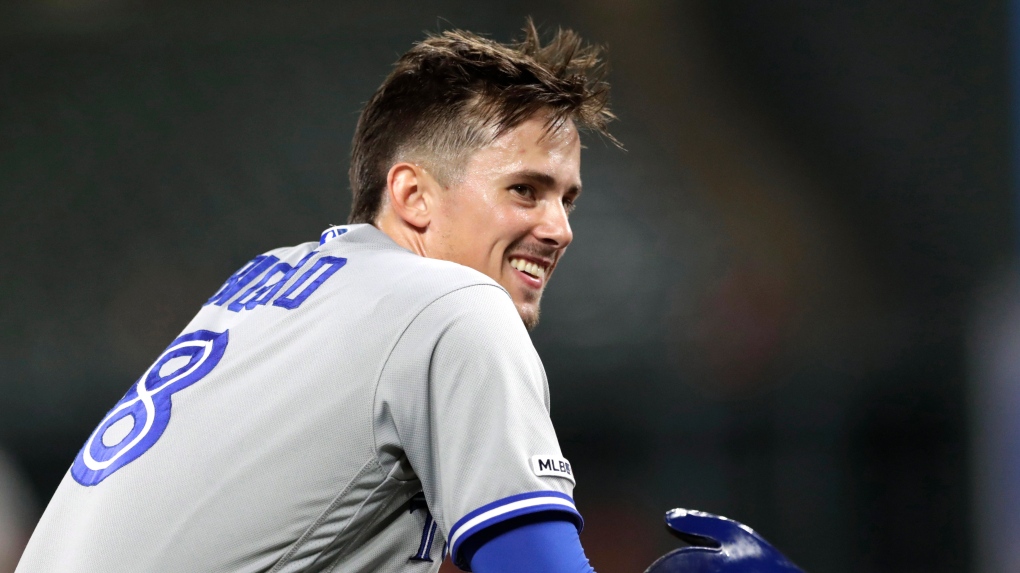 Toronto Blue Jays' Cavan Biggio looks toward the dugout after hitting a triple to complete the cycle, off Baltimore Orioles relief pitcher Mychal Givens during the ninth inning of a baseball game Tuesday, Sept. 17, 2019, in Baltimore. The Blue Jays won 8-5. (AP Photo/Julio Cortez)

BALTIMORE -- Rookie Cavan Biggio hit for the cycle, and the Toronto Blue Jays beat the Baltimore Orioles 8-5 on Tuesday night.

Biggio homered in the third inning, singled in the sixth, doubled in the eighth and tripled in the ninth. He drove in four runs and scored three times.

Biggio and his father, Craig, a Hall of Famer with the Houston Astros, are the second father-son duo in major league history to hit for the cycle, joining Daryle and Gary Ward.

Cavan Biggo is the first player to hit for the cycle for Toronto since Jeff Fry against the Texas Rangers on Aug. 17, 2001.

It was also the first time an opponent hit for the cycle in the 27-year history of Camden Yards.

Trey Mancini and Jonathan Villar homered for last-place Baltimore, which lost for the third time in four games.

Mancini finished with four RBIs. He hit his 34th homer in the first, and snapped a tie with a run-scoring single off Justin Shafer in the seventh.

The Blue Jays tied the game again when Biggio doubled, stole third and scored on a sacrifice fly by Lourdes Gurriel Jr. in the eighth.

Justin Smoak put Toronto ahead when he led off the ninth with a towering shot off Mychal Givens (2-6). It was Smoak's 21st homer and first since Aug. 27.

Biggio tacked on two more runs with a triple to centre before an error by shortstop Villar allowed the eighth run to score.

Derek Law (1-2) picked up the win by throwing a scoreless eighth inning.

The Orioles took a 2-0 lead on Mancini's two-run drive off Ryan Tepera. The Blue Jays responded with Randal Grichuk's solo drive in the second off Chandler Shepherd, who was making his first major league start.

Grichuk has 10 home runs in 26 career games against Baltimore.

Villar hit his 22nd home run off Ken Giles in the ninth.

Blue Jays: RHP Jordan Romano (elbow) is expected to throw Wednesday and could pitch this weekend if there are no setbacks, according to manager Charlie Montoyo. ... RHP Tim Mayza will need Tommy John surgery. He finished the season 1-3 with a 4.91 ERA.

Orioles: DH Mark Trumbo was scratched because of neck and back tightness but was available off the bench. ... INF Renato Nunez was hit by a pitch in his left hand Monday in Detroit and was not in the lineup. "He's day to day," manager Brandon Hyde said.