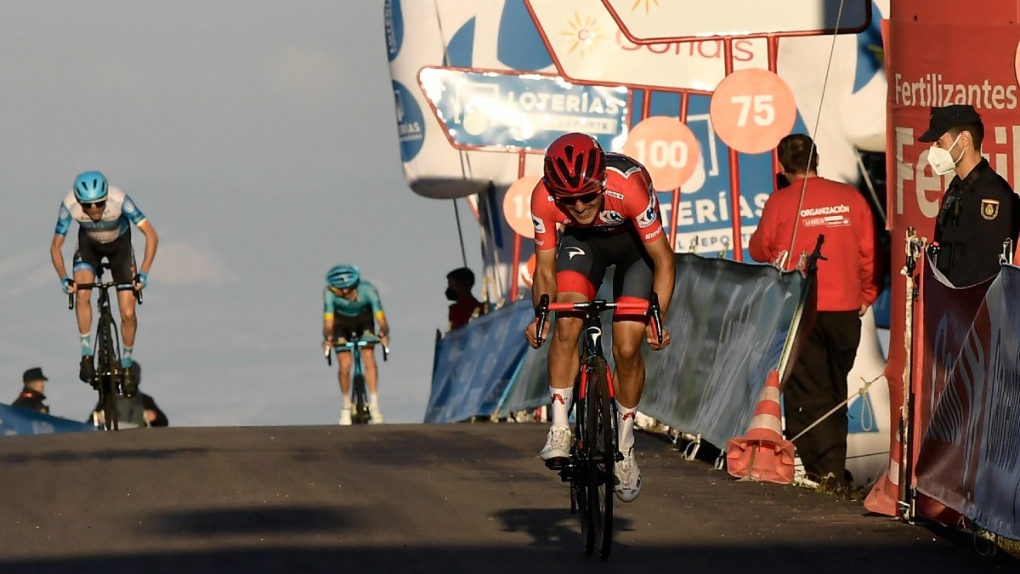 Ineos's Richard Carapaz, red shirt leader of La Vuelta, before crossing the finish line on second position behind Jumbo's Primoz Roglic at the end of the eight stage of La Vuelta between Logrono and Alto de Moncalvillo, in Logrono, northern Spain, on Oct. 28, 2020. (Alvaro Barrientos / AP)

AGUILAR DEL CAMPOO, SPAIN -- Sam Bennett was stripped of his victory on the ninth stage of the Spanish Vuelta on Thursday after hitting a rival with his shoulder in the final sprint.

Pascal Ackermann of team Bora-Hansgrohe was given the stage win instead for his third Grand Tour victory, and first in the Vuelta. Gerben Thijssen moved up to second place and Max Kanter took the final podium spot.

"I didn't expect to win because Sam was ahead but when I saw the video, it wasn't a fair action from him," Ackermann said. "After all the crashes of the last weeks, we have to take care of the other guys. If there is no hole, we have to stop. I feel sorry for Sam but I totally understand we have to ride in a more fair way."

Race officials said Bennett was found guilty of an "irregular sprint" after hitting Emils Liepins with his shoulder entering the final meters (yards) of the stage. He was relegated to last place.

Bennett was looking for his second stage win after prevailing in the sprint at the end of the fourth stage. The Irish rider from team Deceuninck-Quick Step won two stages at the Tour de France this year.

There were no major changes in the overall standings on Thursday, with Richard Carapaz keeping a 13-second lead over defending champion Primoz Roglic.

"We knew the finale was a bit dangerous," Carapaz said. "We had seen the finish a first time and we wanted to be in a good position not to take any chance. In the end, it was quite an easy day. We expected it to be more nervous."

Roglic, celebrating his 31st birthday, needed a bicycle change with about 13 kilometres (eight miles) left because of a mechanical issue but was able to rejoin the peloton.

The final 40 kilometres (24.8 miles) of the stage were a loop around the Aguilar reservoir.

The peloton stayed bunched up until about five kilometres (3.1 miles) left in the 157-kilometre (97-mile) stage that favoured the sprinters.

On Friday, riders will travel 185 kilometres (115 miles) bordering the Cantabrian coast in a mostly flat 10th stage that includes a Category 3 climb near the end.

The Vuelta is reaching the end of the second of three weeks of racing amid tight health restrictions because of the coronavirus pandemic.