Battle of the basement: Toronto FC and D.C. United face off Saturday 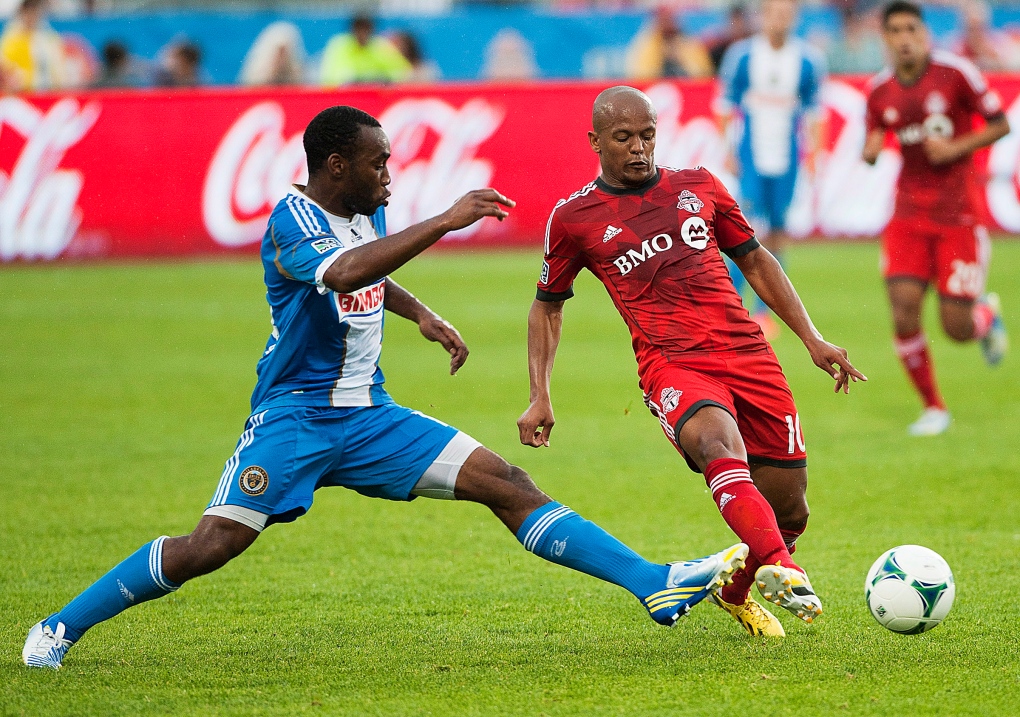 TORONTO -- The two worst teams in MLS square off Saturday in a game that gets uglier the closer you look.

United has taken just three of the last 36 points on offer, during which time the four-time league champion has scored just five times.

An Eastern Conference playoff finalist last season, D.C. United has been shut out nine times in 2013 including its last three games. The team has gone 295 minutes without scoring, the sixth-longest streak in MLS this season and the eighth-longest in club history.

Toronto, which has scored once in its last five outings, is 1-17-9 in its last 27 MLS games dating back to July 28, 2012. It has picked up just five points out of a possible 33 in its current winless run.

First-year manager Ryan Nelsen preaches confidence and patience as he continues his radical makeover of the struggling squad. On Thursday, Toronto sent its 21st player packing since the end of last season.

Progress is slow. Toronto is only three points ahead of its pace last season when it opened with a league-record nine-game losing streak and was 1-10-2 at this point.

Valuable points have been squandered through late goals. Toronto has lost 11 points in seven games through last-minute opposition strikes.

Points are at a premium for both teams Saturday.

"It's a big game," said Nelsen, a former D.C. United captain. "Everybody knows it. They know it, we know it."

While Toronto's record doesn't reflect it, Nelsen and his coaching staff have been separating the wheat from the chaff.

The current roster contains some promising young talent and a few serviceable veterans. But it is short on creativity and lacks killer instinct. Several big pieces are missing.

How bad has Toronto's luck been this season?

Reliable fullback Richard Eckersley has missed eight league games since injuring his hamstring celebrating a teammate's goal in a 1-1- tie with FC Dallas on April 6. To make matters worse, he aggravated the inquiry while rehabbing it.

Veteran defender Danny Califf has gone from starter to patient zero on the TFC roster. According to the team, Califf -- currently No. 5 on the centre-back depth chart -- has suffered from two viruses, in addition to a sore back and knees. One suspects someone on the coaching staff is having fun reading a medical dictionary while they try to trade the 33-year-old Califf and his US$165,000 salary.

Striker Danny Koevermans, returning from a knee injury, was intrigued to learn a sore back had kept him out of practice. It was actually a virus, he assured reporters.

Communication has not been a Toronto strongpoint this season. Open practices are a thing of the past, other than the final minutes of a session.

And in a city whose media is beginning to ignore a soccer franchise that continues to be the league doormat, the coaching staff is pushing back rather than reaching out.

Assistant coach Jim Brennan took time out Thursday to complain to a local reporter about a story. Nelsen, grilled about the team's poor run, recently told another beat reporter "you're not really educated on how a game can be" because they were only looking at the score, not the performances.

Nelsen reinforced that point Thursday when he told reporters that his team had performed well, but just not been rewarded with points.

"You'd have to be pretty deaf, dumb and blind (not to recognize) ... the progression from Game 1 to Philadelphia game," he said. "They're just two different teams that we are now. But we've just got to turn those performances into points."

Perhaps the coaches are looking to shield their players. Or perhaps the frustration is getting to them.

Nelsen can range from affable to annoyed, sometimes in the same scrum.

Listening to the Kiwi, you might think Toronto FC's new management inherited a Sunday pub team rather than one bankrolled by a billion-dollar sports empire.

The league's own power rankings have D.C. United at 19th and last in the league. Toronto stands 17th, ahead of 3-8-2 Chivas.

Washington would be a great place to start winning, especially since Nelsen, president Kevin Payne and chief scout Pat Onstad all spent time with D.C. United.

Toronto captain Darren O'Dea is questionable at left back after picking up a bug while on international duty with Ireland. Centre back Doneil Henry, suspended after being red-carded last time out, will likely be replaced by Gale Agbossoumonde.

Koevermans, returning from a long absence due to knee surgery, is likely to see action off the bench.