Baserunning gets Braves again, NLCS slips away in Game 7 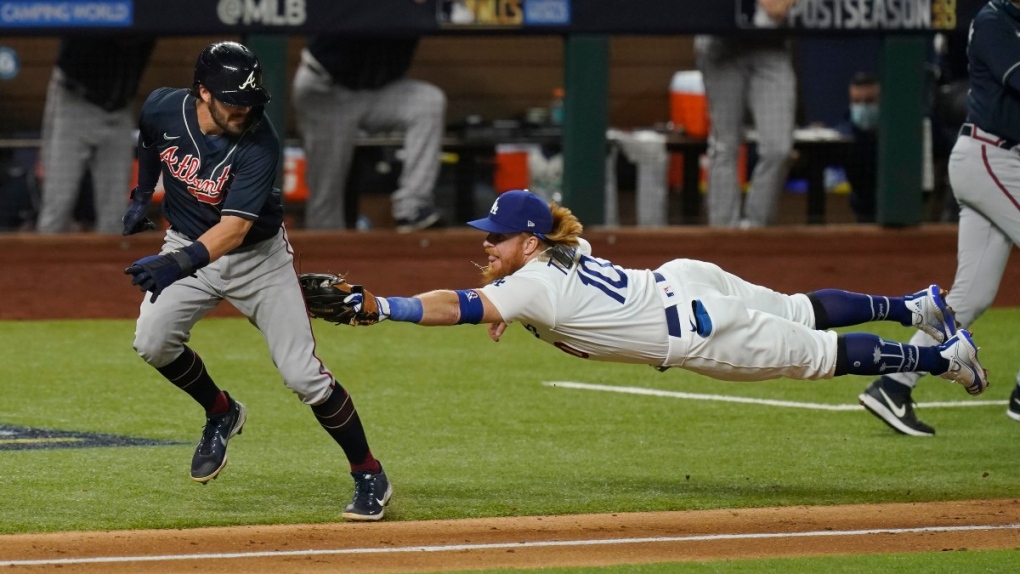 ARLINGTON, TEXAS -- The Atlanta Braves made another baserunning mistake with a lead in the NL Championship Series.

This one was much more costly.

The Braves ruined a promising fourth inning by running into a wild double play before the bats went cold in a 4-3 loss to the Los Angeles Dodgers in Game 7 on Sunday night.

"We made some mistakes," manager Brian Snitker said. "We shot ourselves in the foot a couple of times that really hurt. Games like these, runs are so hard to come by, you pretty much got to play flawless baseball."

A year after imploding in a deciding Game 5 of their Division Series against St. Louis, the Braves fell short in their first NLCS since 2001 with their sixth straight loss in a winner-take-all game.

Atlanta couldn't hold a 3-1 series lead in an NLCS for the first time after winning each of the previous three with that commanding lead. The Braves haven't been to the World Series since 1999.

Dodgers relievers retired 17 of the final 18 Braves batters, all following a baserunning mishap that will haunt Atlanta this off-season.

The Braves went ahead 3-2 in the fourth inning on Austin Riley's single and had runners on second and third with no outs before the double play that turned the game.

Dansby Swanson broke for home on Nick Markakis' sharp grounder hit right at third baseman Justin Turner, who was playing well off the line. Turner threw to catcher Will Smith to trap Swanson in a rundown as Riley waited halfway between second and third.

Smith returned the ball to Turner, who dived to tag Swanson midway down the line. Turner quickly got up and threw the ball to shortstop Corey Seager, waiting at third to tag out Riley, who decided too late to try taking third.

Even worse, the bizarre 5-2-5-6 double play ended with Markakis still on first. Cristian Pache grounded out to end the inning.

"It was huge," Snitker said. "It's hard to score runs in the post-season. The infield's back so you see the ball up the middle. That's where normally we're a really good baserunning team. We just did the fundamental things wrong."

It was the second time a baserunning mistake with a lead cost Atlanta in the series.

The Braves were up 3-1 in the series and 2-0 in Game 5 when Marcell Ozuna left third base early on what was initially a sacrifice fly that gave Atlanta a three-run lead. The replay review caught the mistake, and the run came off the board in what ended up being a 7-3 loss.

The next chance to score in Game 7 came with one out in the fifth, when LA right fielder Mookie Betts tracked a high fly ball from Freddie Freeman and robbed the MVP candidate of a possible homer.

"There's a lot of things that could have gone the other way, but the Dodgers made plays," Freeman said. "They got out of a second and third, no outs with a great play by Turner. Mookie robbed my home run. We're going to replay everything that's gone on for the next couple of weeks."

Just like in Game 5, the bullpen couldn't make the advantage hold up.

Two days after becoming first starter or reliever to strike out seven in three or fewer innings in the post-season, A.J. Minter gave up the lead to his first batter, Enrique Hernandez, leading off the sixth. Chris Martin surrendered Cody Bellinger's go-ahead solo shot with two outs an inning later.

Minter's 42-pitch outing for three scoreless innings at the start of Atlanta's 7-3 loss in Game 5 was the left-hander's longest since March 6, 2015, for Texas A&M, when he tore an elbow ligament.

Starter Ian Anderson couldn't keep his team in front for the first time in the 22-year-old's brief post-season career. He extended a scoreless streak to start his post-season career to 17 2/3 innings -- the second-longest by a rookie in the past 100 years -- before Smith's tying two-run single in the third.

The right-hander, who won his first two post-season starts, ended up with the third-longest scoreless inning streak to begin a post-season career, behind Hall of Famer Christy Mathewson (1905-11) and Joe Niekro (1980-81).

Anderson was the youngest starter in a winner-take all game since 21-year-old Jaret Wright for Cleveland in Game 7 of the 1997 World Series, won 3-2 by Florida.

Ozzie Albies was the only Atlanta batter to reach in the final five innings, on a one-out walk in the sixth. Dansby Swanson, whose solo homer made it 2-0 in the second, and Riley followed with strikeouts.

Albies and fellow Baby Brave Ronald Acuna Jr. each walked and scored a run. But Acuna didn't reach base again after the first inning, and Albies grounded out to start the ninth as the Braves were held to three hits.

"That's some really good pitching over there," Snitker said of the Dodgers. "Their bullpen, they bring 100 mph sinkers at you and guys with a lot of experience. It's nothing we didn't do."