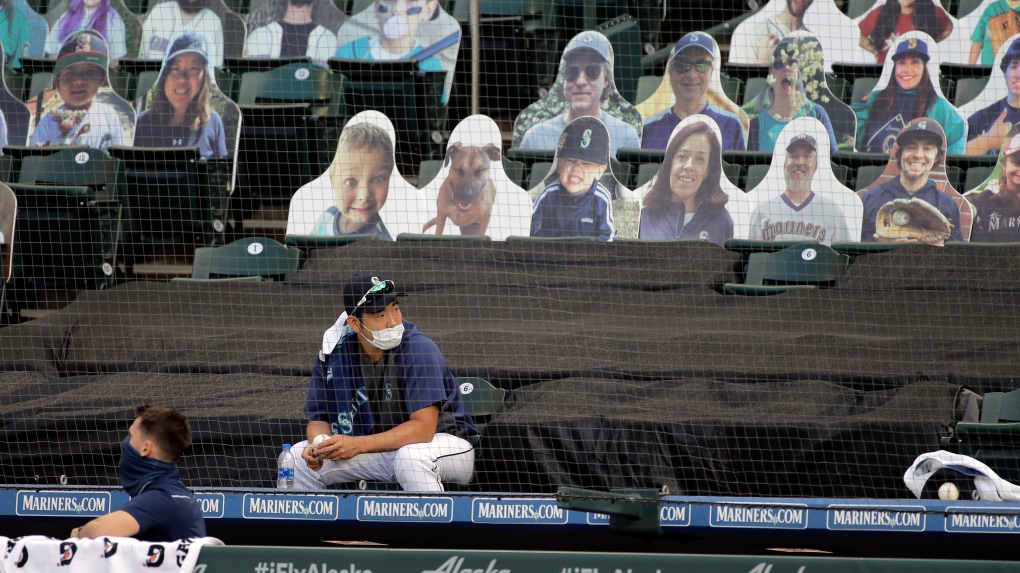 Seattle Mariners pitcher Yusei Kikuchi sits above the dugout near photos of fans during a baseball game against the Oakland Athletics, Monday, Aug. 3, 2020, in Seattle. (AP Photo/Ted S. Warren)

SAN FRANCISCO -- Gone for now are the days of baseball players, often dirt-stained and still in uniform, gathering in the clubhouse to scarf down a late night meal before heading their separate ways until doing it all again some 24 hours later.

The coronavirus pandemic has changed that cherished time when players could sit together at a table to decompress from a long game, celebrate a hard-fought win or support each other through a tough defeat.

Still, many teams are trying to find smart and creative ways to mingle safely and have some semblance of that close-knit normalcy while paying close attention to season-stalling outbreaks for the Miami Marlins and St. Louis Cardinals.

The San Francisco Giants arrived at their team hotel in Denver on Sunday night and discovered what manager Gabe Kapler thought would be an ideal space for planning meetings and players to hang out during the club's current four-game series with the Colorado Rockies.

Then he found something safer.

"We scoped them out indoors initially and we met with the hotel to ensure that those would be places that we could utilize and spread out, and then this morning, we audibled because we found an outdoor area right outside one of those meeting rooms that was especially spread out and gave us an opportunity to do our advance meetings," Kapler said at the start of a 10-game trip that also goes through Los Angeles and Houston.

Road teams have been hit hardest by COVID-19. The Marlins played in Philadelphia and the Cardinals were in Minnesota when the coronavirus began to spread through their rosters, leading to postponements that are wreaking havoc on the shortened 60-game schedule.

The teams out West don't necessarily feel removed geographically from what is affecting those as far as 3,000 miles away.

"We are all in this together as the National, League, the American League, all of baseball, all of us," Rockies manager Bud Black said.

Joe Maddon wants his Los Angeles players to be able to gather after night games -- socially distanced, of course. So he planned to secure a banquet room or conference space as the Angels begin a six-game trip Tuesday in Seattle that ends this weekend at Texas. Maddon also hoped to have a small room for coaches to spend time together.

The Texas Rangers rent a ballroom on the road with a side space used for meetings and also have a hospitality room. Manager Chris Woodward's priority is to prevent players from moving room to room within the hotel, and he's asking them to wear masks and keep their distance in banquet room.

"What we're seeing now, I feel like, we're really close to possibly shutting down if there's another outbreak somewhere," Woodward said. "So we're trying to be as preventative as we can."

Black heard of Maddon's idea and said he would consider the options for Colorado, hoping it could make up for some of what has been lost due to clubhouse safety protocols.

"There's obviously a component that players are used to postgame, being in the clubhouse, hanging out, talking about the game, sharing a meal, relaxing, hanging out, together. The new guidelines and protocols do not recommend that," Black said. "To be able to spread out and maybe kibitz a little bit would be something that is beneficial."

Medical experts say the bigger the room with more space to spread out, the lesser the risk -- but there's certainly still risk when gathering groups such as baseball teams.

"I would not characterize spending time in the same room for long periods of time a high risk activity for transmission, but some might assume no risk if you're physically distanced, and we should be clear about the fact that we do have evidence of transmission in this kind of setting," said Dr. Emily Gurley, associate scientist in the department of epidemiology at the Johns Hopkins Bloomberg School of Public Health.

"... The ballroom solution does not eliminate risk for transmission. Another step to further reduce risk in this setting is to increase the airflow in the room."

Many are adapting as they go.

"I think we need to have thick skin and be resilient and be willing to adjust," San Francisco's Samardzija said. "It's a short season. We certainly knew going in it was going to be a different situation. But as long as we're healthy and we can continue to get stronger as a team then those teams are going to be in great position to make the playoffs."