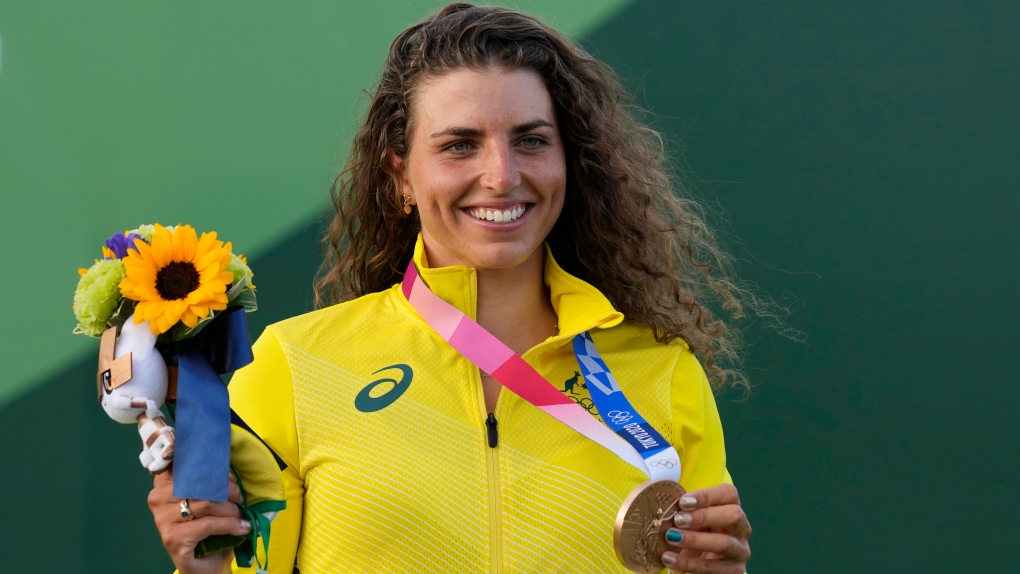 Australia's Jessica Fox holds the bronze medal during the ceremony for the Women's K1 of the Canoe Slalom at the 2020 Summer Olympics, July 27, 2021, in Tokyo, Japan. (AP Photo/Kirsty Wigglesworth)

HALIBURTON, ONT. -- Australian Olympian Jess Fox got a little creative in Tokyo, fixing her kayak with an Olympics-issued condom before going on to win a bronze medal in her event.

Fox and Team Australia revealed her on-the-fly way kayak fix with an official Olympics rubber on social media on Tuesday.

"Bet you never knew condoms could be used for kayak repairs," the 27-year-old wrote in a video showing the repair on Instagram.

Fox used the condom to hold in place a carbon mixture applied to the tip of the vessel.

"Very stretchy, much strong," reads the post, adding "it gives the carbon a smooth finish!"

The kayak champion went on to win the bronze medal in the kayak slalom final on Tuesday, after qualifying with the fastest time. Fox hit a gate on her final run, resulting in a time penalty.

However, Fox rebounded on Thursday when she won the first women's canoe slalom gold, ripping through the rapids at the Kasai Canoe Slalom Centre in 105.04 seconds.

The women’s canoe slalom is one of 18 new events introduced in a push for gender equity at the Olympics this year. It replaced the men's double canoe slalom.