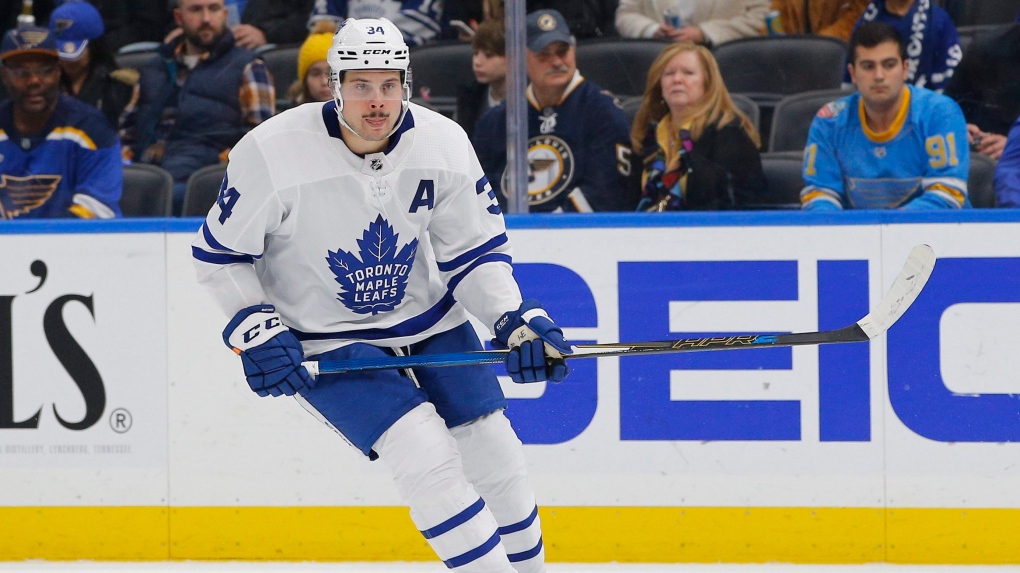 Toronto Maple Leafs' Auston Matthews looks on during the third period of an NHL hockey game against the St. Louis Blues, in St. Louis, Saturday, Dec. 7, 2019. (THE CANADIAN PRESS/AP-Billy Hurst)

Judging by his offensive output, it's hard to tell.

The 22-year-old is tied for second in the NHL with 34 goals this season to match his jersey number, with eight coming in his last nine games.

Matthews worked to rehab the injury during Toronto's bye week, but decided to skip the all-star game's on-ice activities as he looks to make a final push through the last 33 games of the regular season.

"You want to compete out there and participate," Matthews said at Thursday's media availability. "But in the grand scheme of things, the important games are the ones in the regular season.

"Getting a couple of extra days to heal and rest (the injury) is important. This is an important part of the season and that time is valuable to get healthy and move on."

Asked if the injury happened on a specific play, Matthews said he couldn't put his finger on the exact moment the joint started to get uncomfortable.

"It was just wear and tear," he said. "I can't really pinpoint the exact day. But this has been kind of going on and nagging for two or three weeks.

"I'm hoping this week off and these extra two or three days can kind of help it. I'm still planning on playing next week."

Matthews, who's missed a combined 34 games over the last two seasons with various injuries after playing a full schedule in his 2016-17 rookie campaign, is on pace to score 57 goals -- which would break the franchise record of 54 set by Rick Vaive in 1981-82.

Even if the native of Scottsdale, Ariz., doesn't quite get there, he could still become the first Maple Leaf to score 50 since Dave Andreychuk bagged 53 in 1993-94.

"It's super cool he's still here," fellow Leafs all-star Mitch Marner said of Matthews showing up in St. Louis. "He's a leader on our team, and he's also a leader in the NHL and sports.

"Everyone looks up to him."

Matthews said that while his current ailment isn't serious, the pain is never far from his mind.

"It's just one of those things that's nagging every time you're stickhandling, shooting," he said. "In a game there's a lot of adrenalin going and things are going through your mind. You kind of forget about it, manage it and play through it."

The Leafs will need Matthews, who also has 23 assists to give him 57 points in 49 contests, as close to 100 per cent as possible as they attempt to pull themselves out of a recent 1-3-2 slide that's bumped the club out of a playoff spot in the Eastern Conference.

Toronto started 15-4-1 after Sheldon Keefe replaced Mike Babcock as head coach in November, but has surrendered 30 goals over its last six games to sit four points below the cut line.

Voted in by fans as one of the "last men in" for all-star weekend, Marner said the high-scoring Leafs have been negligent in their own zone.

"We've been giving up a lot," he said. "We haven't been playing a (good) defensive game.

"We're cheating for offence. We're doing things wrong and it's really hurting us."

Toronto netminder Frederik Andersen -- the third Leaf at the all-star game -- has an .881 save percentage over his last 11 outings, but while he hasn't measured up to his own high standards, the team has surrendered far too much real estate in the slot.

"It's still early with a new coach and a new system," Andersen said. "We had a really good stretch where things were going our way. I think teams were opening their eyes a little bit more when we were playing them. That means we've got to bring our best.

"That's an exciting challenge, but that means we can't take any shifts off."

Toronto was especially frustrated with a lacklustre showing in a 6-2 home loss to Chicago before its bye, one where the players seemed like they already had one foot out the door instead of focusing on the task at hand.

"You just try and get away from hockey and recharge," Matthews said of the time off. "The last game wasn't a great game for us, but you've just got to move forward."

That starts Monday in Nashville, where the Leafs will aim to get back on track before visiting Dallas on Wednesday -- hopefully with Matthews front and centre.

It just something can't linger much longer.