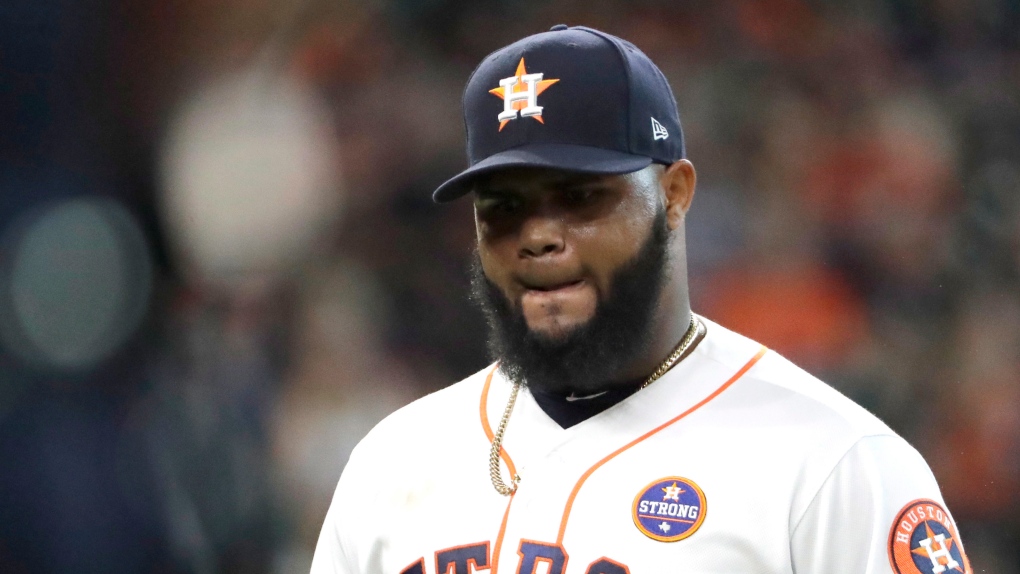 FILE - In this Sept. 16, 2017 file photo Houston Astros relief pitcher Francis Martes walks toward the dugout after being pulled during the eighth inning of a baseball game against the Seattle Mariners in Houston. (AP Photo/David J. Phillip, file)

Martes tested positive for Boldenone, the commissioner's office said Monday. Boldenone is sold under the brand name Equipose and is used commonly on horses.

A 24-year-old right-hander, Martes is on the Astros' 40-man major league roster but hasn't pitched in the big leagues since 2017.

He was suspended last March 12 for 80 games following a positive test for Clomiphene, a women's fertility drug that has been used by some athletes to counter side effects of steroids use. Martes returned Aug. 21 and made two starts for the rookie level Gulf Coast Astros and one for Quad Cities of the Class A Midwest League. He was 0-2 with a 6.75 ERA in 5 1/3 innings.

Martes' ban isn't quite the Houston-related cheating punishment fans and players have clamoured for around baseball. The Astros have been pummeled via the press by opposing teams since opening spring training, with many expressing disappointment that no players were suspended for their sign-stealing scam.

Martes did not have a statement, the players' association said.

“Throughout our system, players are educated through MLB's drug prevention and treatment programs,” the Astros said in a statement. “We hope that Francis will learn from this experience moving forward.”

He is the second player suspended this year under the big league program. Colorado pitcher Justin Lawrence was suspended for 80 games following a positive test for the performance-enhancing substance Dehydrochlormethyltestosterone (DHCMT). Lawrence also has yet to make his big league debut.