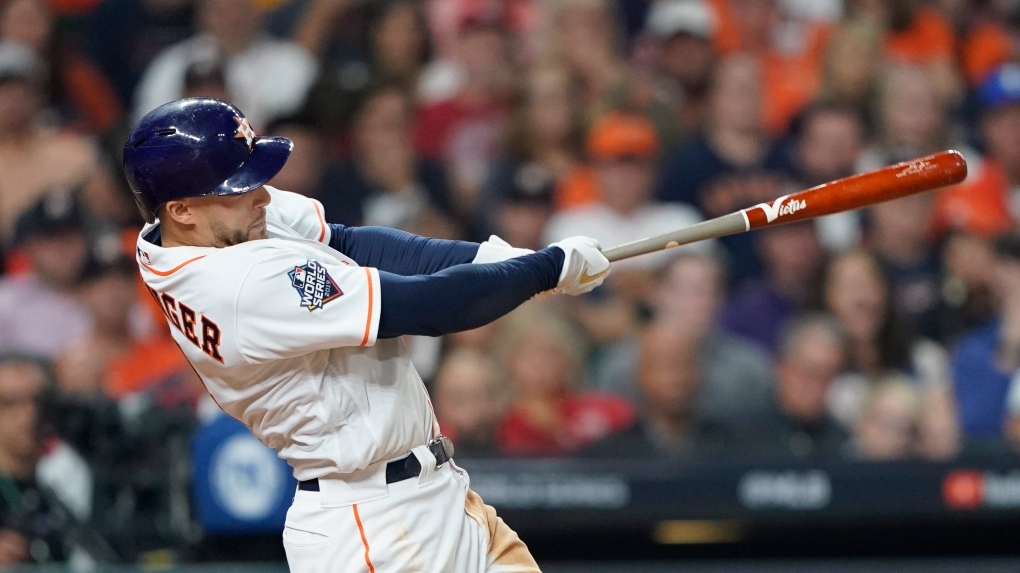 In this Oct. 22, 2019, file photo, Houston Astros' George Springer hits a home run during the seventh inning of Game 1 of the baseball World Series against the Washington Nationals in Houston. (AP Photo/David J. Phillip)

HOUSTON -- George Springer, the World Series MVP of the tainted 2017 Houston Astros, and the team settled on a US$21 million, one-year contract Thursday.

Springer had asked for $22.5 million in salary arbitration last week and the Astros offered $17.5 million, making the settlement $1 million over the midpoint. He made $12.15 million last year.

The 30-year-old outfielder set career highs last season, hitting 39 home runs with 96 RBIs while batting .292. He was an All-Star for the third straight season.

Springer led Houston to its first World Series title in 2017, hitting five homers in the seven-game win over the Los Angeles Dodgers. He connected in the final four games of the matchup.

This week, Major League Baseball Commissioner Rob Manfred released a report that detailed a cheating scheme by the Astros in the 2017 regular season and post-season to steal catchers' signals using video feeds and relay them to their hitters Houston manager AJ Hinch and general manager Jeff Luhnow were suspended by MLB and then fired by the team.

Alex Cora, the bench coach for Houston in 2017, was let go this week as Boston's manager. Carlos Beltran was the only player named in the MLB report -- hired last November to manage the New York Mets, he was let go Thursday.

Springer and the Astros lost last year's World Series to Washington in seven games. In 14 World Series games, he has hit .339 with seven home runs.