As it happened: Morocco win 2-1, Canada finishes World Cup without a point

As it happened: Morocco win 2-1, Canada finishes World Cup without a point 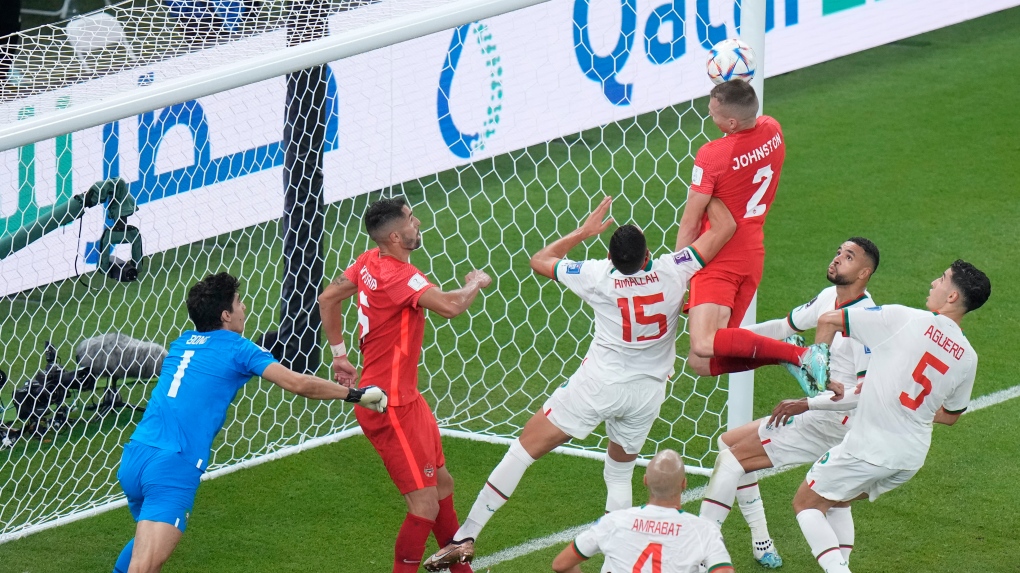 Canada lost its final match of the men's World Cup 2-1 to Morocco despite a spirited second-half showing.

After a horrific start that saw Canada trail 2-0 inside the first 25 minutes, the men in red bounced back and were unlucky not to come away with anything to show for it.

The closest Canada came to tying the match was when Atiba Hutchinson headed against the crossbar off a corner in the 71st minute. Alistair Johnston headed the follow-up attempt over the bar from a yard out.

The Canadian men remain without a point at the World Cup and lose all three matches at this edition against Belgium, Croatia, and now Morocco.

Milan Borjan rushes forward for a free kick and stunningly ends up delivering a cross into the box which is headed away. Morocco look to break away with another empty net opportunity but Alphonso Davies races back and wins the ball.

Canada continue to pile on the pressure as Morocco sit deep but no chance of significance to note. Four minutes of stoppage time have been added on.

Steven Vitoria earns himself a yellow card after raising his arm and inadvertently hitting Morocco's Abderrazak Hamdallah in the face while attempting a header.

Canada earn another corner but it's headed well wide. The team has shown great fighting spirit in this second half but time is running out.

Morocco break up a Canada attack and go the other way with pace. Sofyan Amrabat drove through the middle before teeing up substitute Abderrazak Hamdallah. Going one-on-one against Atiba Hutchinson, the Canadian does superbly to take the ball off him and regain possession.

CROSSBAR: Atiba Hutchinson's heads a great corner from Junior Hoilett against the crossbar. The ball comes down on the edge of the line but goal line technology indicates no goal. Alistair Johnston then follows up with a header over the bar from a yard out as he's pressured by Moroccan defenders. So close!

A bit of trickery from Tajon Buchanan as he jinxes past one defender and then another before drawing a foul about 30 yards away. Alphonso Davies' free kick is headed away by a Moroccan defender for a corner.

Another half-chance for Canada as Junior Hoilett sends a cross in from the right side but Davies outstretched effort goes wide of the right post.

Junior Hoilett earns Canada a free kick from the right side and Alphonso Davies sends a teasing ball that goes wide of the goal. Cyle Larin pursued it but couldn't quite get there.

Morocco playing much deeper and inviting pressure to start this half. Canada can't really seem to find a way through their excellent organization yet.

Alphonso Davies suggests to the referee that the ball is flat and the referee agrees. The ball is changed and the match continues.

Morocco look to threaten coming down Canada's left side but Kamal Miller intercepts and leads a break. With Tajon Buchanan chasing a ball into the box, Morocco clears.

No changes for either side at halftime. Canada did change from a 4-4-1-1 formation to a 3-5-2 midway through the match.

Canada will be bitterly disappointed with the two goals conceded.

The first came via a nightmare clearance by keeper Milan Borjan who rushed out of the penalty box to receive a pass looking to play the ball short instead of booting it long, only to find Morocco's Hakim Ziyech who happily accepted the gift and curled the ball into the empty net. Steven Vitoria will take some blame for playing an extremely short ball to Borjan that forced him to come out of the box in the first place.

Playing a high press, Canada looked to have Morocco cornered deep on the right side but Hakim Ziyech sent a smart long ball up the field. Youssef En-Nesyri hunted it down faster than Kamal Miller and Steven Vitoria before beating Milan Borjan at his near post.

Adekugbe's deflected cross gives Canada a lifeline, but Morocco looks a serious threat to score every time they get into the final third.

Morocco think a two-goal lead is restored but a sharp Youssef En-Nesyri strike is ruled out for offside. Comically, En-Nesyri completed a full celebration by himself before turning around and realizing everyone else knew what was happening.

The cards are piling up for Canada now as Sam Adekugbe picks up a yellow for a late sliding tackle.

GOAL: An own goal gets Canada on the board! Canada attack down the left wing through Sam Adekugbe and his sharp cross along the ground takes a deflection off Moroccan defender Nayef Aguerd and finds a way into the back of the net. Game on!

Morocco continue to work through Canada's high press and threaten another goal with a cross from the right side. Vitoria heads away.

There's a stoppage in play due to what appear to be some technical difficulties for the referee crew. Perhaps it will provide Canada an opportunity to regroup...

It's a real party atmosphere now with the large Moroccan contingent of fans in attendance. First place in the group beckons.

Jonathan Osorio is now on a yellow card, committing a late sliding tackle after losing possession with Canada looking to create in the final third.

GOAL: Disaster for Canada. Morocco go 2-0 up through forward Youssef En-Nesyri who runs onto an excellent long ball from right-back Achraf Hakimi with Steven Vitoria and Kamal Miller unable to keep up.

Canada have started to gain a foothold in this match, looking more assured in the middle of the pitch and forcing Morocco deeper.

After another Morocco corner, Canada break away brilliantly and Cyle Larin does exceedingly well to create space for himself on the right side before crossing into the box for Tajon Buchanan. Unfortunately, Buchanan can barely get on the end of it and it's a goal kick.

Morocco follows up a free kick with a corner, and then another free kick. Plenty of pressure in Canada's half as Morocco rides the momentum of the opening goal.

Junior Hoilett picks up a yellow card for a late sliding tackle about 35 yards out after Mark-Anthony Kaye gives away possession in Canada's half.

GOAL: Morocco are on the board via Chelsea star Hakim Ziyech after an absolute howler from Canada goalkeeper Milan Borjan on a clearance. He ran out of the box to reach a pass and hits it straight to Ziyech with the goal empty. Ziyech takes care of the rest.

Morocco kicks off the first half and we are underway. The Atlas Lions are lined up in a 4-3-3 formation while Canada are in a 4-4-1-1 setup.

After wearing white in the first match and black in the second, Canada is in red. Morocco is in white.

O Canada is belted out first by the players and fans alike at Al-Thumama Stadium and the Moroccan national anthem follows.

John Herdman has made four changes to the Canada XI that started against Croatia.