Andreescu learning from 2021 disappointment, hoping to bounce back on hardcourt 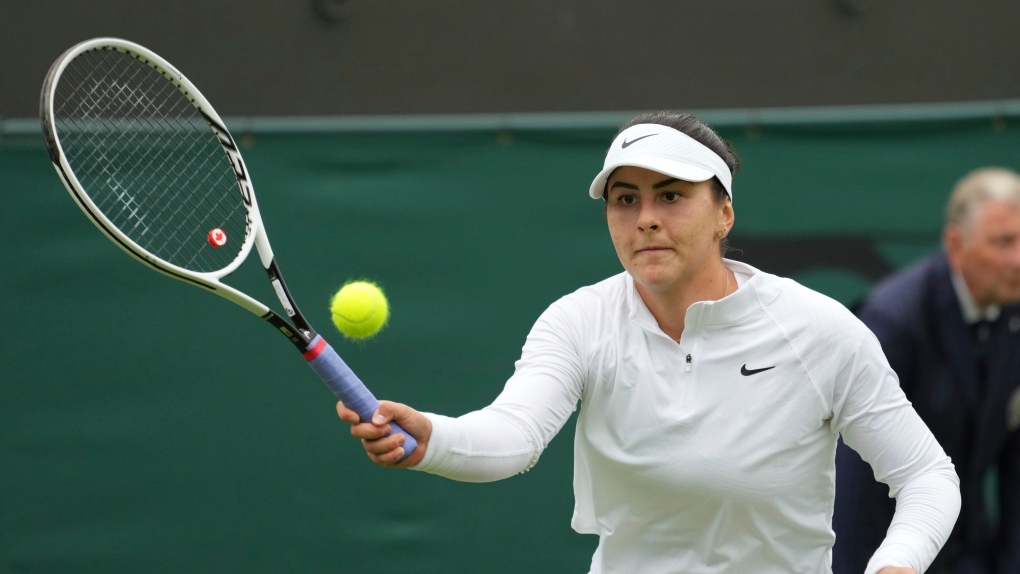 Canada's Bianca Andreescu plays a return to Alize Cornet of France during the women's singles first round match on day three of the Wimbledon Tennis Championships in London, Wednesday June 30, 2021. (AP Photo/Alberto Pezzali)

Bianca Andreescu got so used to winning in 2019 she almost forgot what it felt like to lose.

The 21-year-old Canadian tennis star has been relearning to deal with disappointment on the court this season while trying to find her footing after 16 months off due to injuries and the COVID-19 pandemic.

Andreescu won three tournaments in 2019 including her first Grand Slam title at the U.S. Open, skyrocketing to No. 4 on the WTA rankings and cementing herself as a face of women's tennis.

But when her breakthrough season ended abruptly with a knee injury at the WTA Finals in Shenzhen that October, Andreescu felt like she had crashed back down to earth -- hard.

"It was a complete stop ... and that was probably the worst feeling that I had," Andreescu said in a recent interview with The Canadian Press. "It brought me down many levels, because after that I didn't play for a year and a half.

Still ranked No. 5, Andreescu has played just 19 matches this season, including a first-round exit at Wimbledon last month.

While she looked to have regained her championship form at the Miami Open in April, Andreescu was forced to retire from that final with an ankle injury. A few weeks later, she withdrew from the Madrid Open after testing positive for COVID-19.

The past year has brought many changes and challenges for the Mississauga, Ont., native, including pandemic restrictions that significantly impacted her training regimen, and a parting of ways with long-time coach Sylvain Bruneau.

"This year was about adapting a lot," she said.

"But I think I dealt with it in the best way I could and I learned a lot about myself. ... I try to just move forward and deal with anything that comes my way and learn from it."

Andreescu is partnering with Amazon Canada this summer to share stories of her experiences on and off the court through the Alexa voice service, the company announced Tuesday.

The content also includes training and motivation tips from Andreescu, who said her goal with the collaboration was to "inspire others and bring joy to peoples' lives."

"During this time with the pandemic, things haven't been easy for everyone," she said. "So I hope this can bring some smiles to peoples' faces."

The pandemic has turned a spotlight on mental health concerns for many, including some within the tennis world.

Japanese star and world No. 2 Naomi Osaka furthered the conversation on mental health when she withdrew from the French Open in June, saying in a statement she had dealt with "long bouts of depression" after winning the U.S. Open as a 20-year-old in 2018. She also withdrew from Wimbledon weeks later.

Andreescu, who was 19 when she won the U.S. Open, can relate to Osaka on some levels.

Both players beat American superstar Serena Williams in New York and dealt with increased media and fan attention in the aftermath of their first Grand Slam titles, as well as soaring expectations to continue winning.

"At first it was great because I was winning and doing well ... (but) then it got to a point where I got injured again, I didn't play in 2020, so there were a lot of times media (would) say rude things," she added.

Andreescu is currently preparing to defend her title at the National Bank Open, which begins next month in Montreal. The event, formerly known as the Rogers Cup, wasn't held in 2020.

While Andreescu's confident in her hard-court play and feels she can bounce back on home soil, she doesn't want to put too much pressure on herself.

"The past couple months have been pretty tough ... but I'm not always gonna win and I have to look at that reality," she said. "I have to go through other things to find my way to the top again."