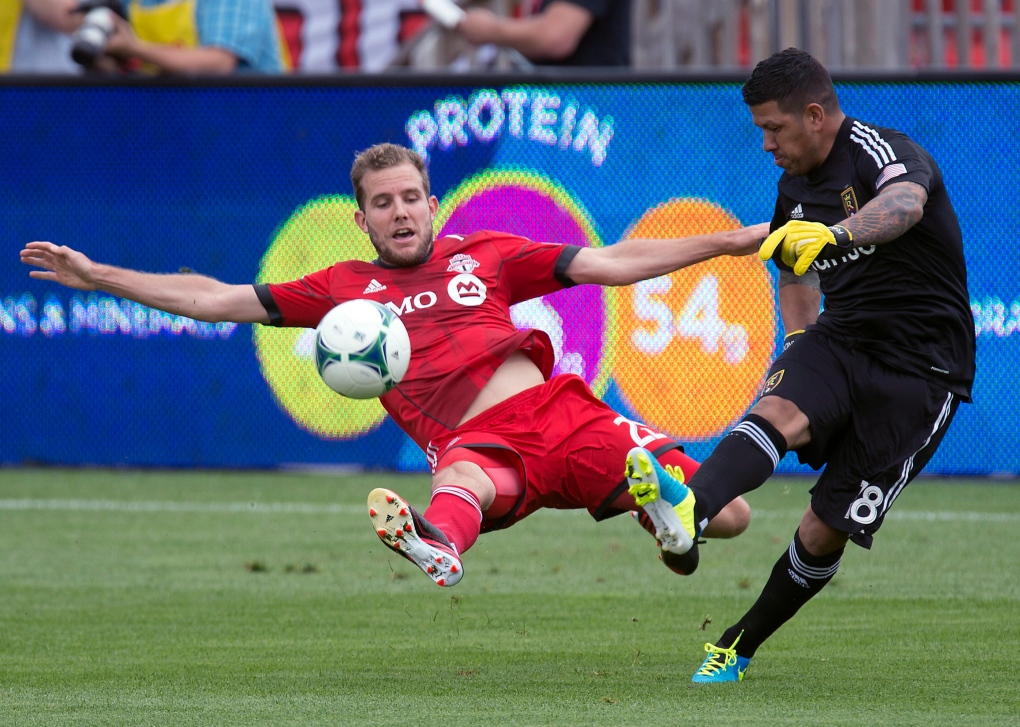 TORONTO -- So often victims of conceding late goals this season, Toronto FC nearly turned the tables against the best team in the MLS Western Conference.

TFC had three golden opportunities in injury time to get an equalizer, but came up short in a 1-0 loss to Real Salt Lake on Saturday that snapped Toronto's three-game unbeaten streak.

"It was just the bounce of the ball didn't quite seem to let it roll into the back of the net and it was one of those days where by far we had the more opportunities," said Jeremy Brockie, who had two of Toronto's late chances.

"We probably should have won that because their only shot found the back of the net."

Brockie's first chance came when he got his head to a deflected Justin Braun cross, but Salt Lake goalkeeper Nick Rimando made an acrobatic save to the ball to keep it out.

Minutes later, Brockie was played in with a through ball and beat Rimando only to see defender Nat Borchers clear the ball out for a corner at the last second.

With the last kick of the game, Rimando was at it again stopping what was a scuffed shot from defender Steven Caldwell.

"I don't know how many chances there were in the last 10 to 15 minutes to equalize," said TFC head coach Ryan Nelsen. "That's the probably the frustrating thing. Even our performance is not as good as it has been in the past, we're playing the best team in the West and the boys are completely gutted that they had the chances."

Yordany Alvarez's goal just before halftime had given Salt Lake the lead despite Toronto dominating play.

Javier Morales had the ball in the TFC penalty area and knocked it back out to Alvarez who unleashed a right-footed shot that left Toronto goalkeeper Joe Bendik rooted on the line as he watched the ball fly past him, silencing the 20,841 in attendance at BMO Field.

TFC is still winless at BMO Field in MLS competition since July 18, 2012, when they beat the Colorado Rapids. Their only home victory this season came when they beat Sporting Kansas City in March at the Rogers Centre.

"We weren't very good and we need to step on, especially at home," said captain Darren O'Dea, who still hasn't experienced winning at BMO Field since joining the team in August of last year. "If we want to win games in this league we have to do better at home."

Both teams were reduced to 10-men rosters with 11 minutes remaining when both Tony Beltran for Salt Lake and Doneil Henry were red carded. It was Henry's second ejection of the season.

Beltran had initially fouled Silva before needlessly shoving the Toronto player and Henry then stormed in to shove Beltran to the ground. Had Henry simply resisted the urge to shove Beltran, Toronto would have been up a man for those crucial moments.

The red card means Henry is facing a suspension, but TFC already knew they'll have be without him and three other players who head off to link up with the Canadian national team to prepare for July's Gold Cup tournament in the United States.

"His instinct as a young 20-year-old is probably to do it," said Nelsen of Henry's lapse in judgment. "Everyone in this room has probably done the same thing. Is it the right thing to do? Of course not. We would have had 11 men versus 10. We were in the ascendancy and maybe things would have been different."

Just two minutes into the game, Canadian Jonathan Osorio eluded a few Salt Lake defenders before taking a left-footed shot from outside the 18-yard box that just went wide.

Toronto again came calling in the 13th minute when Danny Koevermans found a streaking Bobby Convey through the middle. Convey lunged to get his left foot to the ball but it spun away wide.

Koevermans was making his first start since tearing an ACL almost a year ago. Save for a few heavy touches on the ball, Koevermans put in a good performance getting involved in Toronto's attack while also helping out on defence when needed.

He lasted 54 minutes before being replaced by Luis Silva.