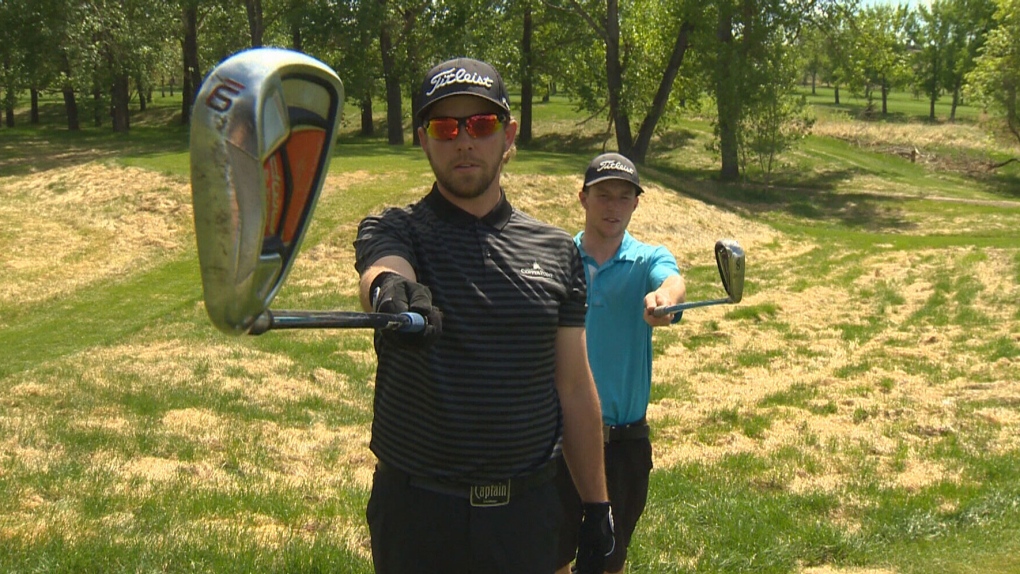 Visually impaired golfer Kiefer Jones (left) lines up a shot with the help of his friend Tobyn Larsen. (CTV Edmonton)

Navigating sand traps and trees is part of the challenge of golf -- but imagine playing the game when you can’t see the course.

That’s what golf is like for Kiefer Jones, 27, who recently qualified for the 2018 World Blind Golf Championships, which will be held in Italy in October.

“I golf six days a week,” the Albertan told CTV News. “I don’t know what else I would do if I wasn’t golfing!”

Since he first picked up a plastic golf club at age 18 months, the sport has been his passion. But when Jones was 16, he began to lose his sight.

“I got a virus that attacked my optic nerve,” Jones explained.

Adjusting to life with a visual impairment caused Jones to give up his beloved game for several years until a friend came along with an idea to get him playing again.

“A friend of mine said, ‘I’ll take you out golfing and I’ll watch your ball if you help teach me to play golf,’” Jones said.

Not only did that suggestion get Jones back on the links, but it also helped him figure out a new way to play in which he has a buddy line him up and describe the shot distance. The system has proven to be so successful that it even resulted in a recent hole-in-one.

“So he takes his line, lines up and hits it right at the hole,” Jones’ friend Tobyn Larsen recalled. “(The ball) takes one hop, bounces right a little bit, takes a little loop around the hole and just disappeared.”

With the 2018 World Blind Golf Championships now on the horizon, Jones feels unstoppable.

“It’s a game I’ve played my whole life,” Jones added. “And it’s a game I plan to play until I can’t play anymore.”

With a report from CTV’s Vancouver Bureau Chief Melanie Nagy