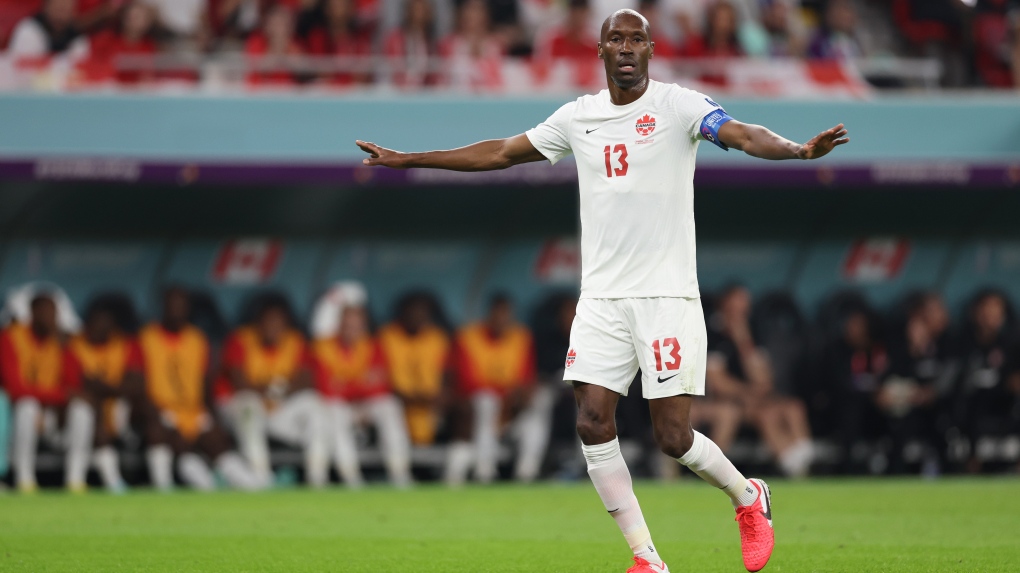 Spare a moment for captain Atiba Hutchinson on Sunday when Canada takes on Croatia at the World Cup.

Nineteen years after pulling on the Canadian jersey for the first time at the senior level, the 39-year-old from Brampton, Ont., is in line to win his 100th cap, adding to his men's national team record.

That's 19 years of hard graft and criss-crossing the globe. Leaving the family. Turning out for his country when it ranked 122nd in the world, sandwiched between Niger and Liberia (in October 2014).

Hutchinson has done it with grace and style.

"He's been someone that's been with this program through thick and thin. He's been here through a lot of really tough times and he keeps coming back," said Canadian defender Alistair Johnston.

"He's a role model," added winger Tajon Buchanan. "He's been doing it for a very long time. He's been through it all, the highs and lows."

If anyone makes a fuss over the 100-cap milestone, it won't be Hutchinson. The veteran midfielder is a serene presence, comfortable in his own skin.

But he casts a big shadow.

"He's got such a presence to him and an aura," said Johnston. "If you're lucky enough to ever be around him, when he walks into a room, he's got a smile that lights up the room. You can just sense that the temperature changes."

At 24, Johnston is 15 years younger than his skipper.

Alphonso Davies was two when Hutchinson made his debut in January 2003 against the U.S. Midfielder Ismael Kone was six months old.

"He's just a really special man," Canada coach John Herdman said on the eve of Sunday's game. "I think all of us are in a moment where we'll be doing this as much for Atiba as we are to get our three points. He's a legend.

"I've had the privilege of being with (Canada women's captain Christine) Sinclair in key moments and now Atiba Hutchinson. And these are the moments you work hard to be part of. We'll do everything we can to give him a great day."

In recent years, Hutchinson's participation has been restricted to Canada games that matter.

Since September 2015, he has played for Canada 30 times. During that stretch he featured in 19 World Cup qualifiers, plus the World Cup opener against Belgium, five Nations League games, three Gold Cup outings and just two friendlies.

Injuries have played a part in that. But Hutchinson, who captains Besiktas in Turkey, is a valuable resource, not to be wasted.

There's more to the six foot one Hutchinson than meets the eyes on the pitch, with a pair of spindly pipe-cleaner legs deceiving at first notice.

Besiktas fans call him the Octopus for his long legs and reach. He's hard to dispossess with the ball and tough to fend off when he's looking for it.

Those in the know have always valued Hutchinson.

"Atiba is our best player," then-Canadian coach Benito Floro said in 2014. "He is the best player in Besiktas."

That same year, then-Arsenal manager Arsene Wenger singled out the Canadian after the Gunners beat Besiktas in a Champions League playoff.

"The best player on Besiktas?" Wenger said during the post-game news conference. "I was impressed by Hutchinson."

Former Canada coach Holger Osieck saw Hutchinson's potential at the CONCACAF under-20 championship back in 2002.

"I am actually convinced -- and you know that I'm always pretty cautious in my predictions -- that he has the tools to play first division football in Europe," said Osieck.

Hutchinson built his career carefully, starting in Scandinavia with Osters and Helsingborg in Sweden and FC Copenhagen in Denmark. Rather than moving to a big league or club where he might languish on the bench, Hutchinson moved to clubs that would use him.

"That helped me a lot, just learning the game really, playing with the first team and getting a lot of games," he told The Canadian Press in 2014. "I kind of look at it like climbing the ladder. That's exactly what I did. Every club I went to was a bit bigger and better than the previous club."

Hutchinson's next move was to the Netherlands and PSV Eindhoven in 2010, a stint that was interrupted by three surgeries to his left knee.

When his contract ran out, he hoped a move to England might follow. What nothing suitable came up, he asked his agent to look at Turkey after hearing positive reports from teammates who had played there.

"They only had good things to say," he said. "Especially about Istanbul."

Hutchinson now calls it home, with his wife and three boys.

The fans are more than passionate, backing the team wherever it plays.

"The support is amazing," Hutchinson said in the 2014 interview. "Even just being out on the streets, the way that they recognize you everywhere you go and the love that they give you. It's really amazing."

Hutchinson is beloved by his Canadian teammates, who value his experience, exploits and manner.

"An unbelievably kind guy," said Johnston. "And it's really special, especially being a young guy, coming into that group where you can be a little star-struck potentially seeing him.

"He's one of the first ones to break down those barriers. He brings over all the young guys, makes it very obvious and well-known that you can talk to him about anything, not just football. And that's one of the best parts about him. He's just a great human being. He's the ultimate representation of what it is to be Canadian and he's a perfect leader of this group.

"He's the main driving reason why this group's done something that's been so special over the past couple of years."

Hutchinson's journey to the World Cup this year was interrupted by a bone bruise sustained in the pre-season with Besiktas. He didn't see action until Nov. 9 when he started a Turkish Cup game, his first outing since June. Eight days later he started for Canada in a 2-1 win over Japan in a World Cup warmup.

Herdman, who said his captain was "brilliant" in the final tournament tuneup, has a good handle on Hutchinson.

"We've had conversations about where there was a decay physically and when that was impacting his mindset," he said before Canada's opener against Belgium. "And at that point that's where I've got to know enough's enough for him.

"He's got to be used with real precision, I think, in this World Cup. So there's a point where he can still compete. But if you know Atiba, once mentally he feels the body's giving up, there's a moment where we've got to be ready to change him."

But Herdman, who is Hutchinson's 10th Canadian manager, liked what he has seen of his captain in Doha.