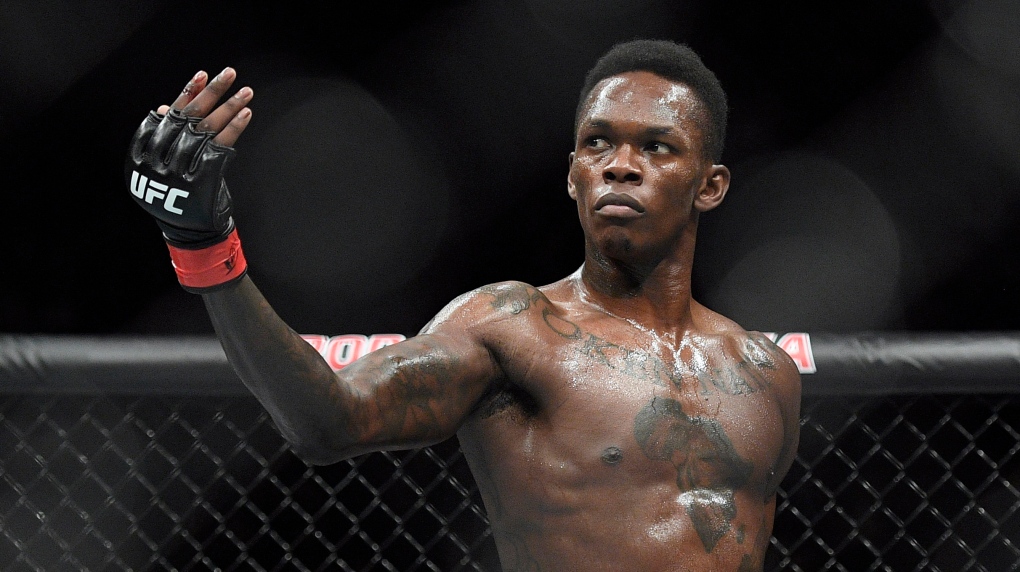 GLENDALE, ARIZ. -- Israel Adesanya won a unanimous decision in a rematch against Marvin Vittori to defend his middleweight championship at UFC 263 Saturday night.

Adesanya (21-1) kept out of reach from Vittori's powerful punches most of the night and used his feet effectively, keeping the Italian fighter off balance.

Adesanya won 50-45 on all three judges' scorecards in the second full-capacity UFC event without coronavirus-related restrictions.

Adesanya lost to light heavyweight champion Jan Blachowicz in his last fight while trying to add a second title belt, but remains undefeated as a middleweight.

In the co-main event, flyweight Brandon Moreno (19-5-2) became the first Mexican-born champion in UFC history, using a rear naked choke in the third round in a rematch against Deiveson Figueiredo (20-2-1).

The two title fights in the desert were tainted with bad blood.

Adesanya and Vettori fought in Glendale three years ago, a split-decision win by Adesanya that left neither fighter satisfied.

Vettori believed he won, Adesanya thought it was too close and the buildup to the rematch was contentious, including an off-the-rails news conference Thursday.

Vittori (17-4-1), as he did in the first fight, had some success on the ground in the rematch after a couple of takedowns. Adesanya wriggled free and was effective with his feet, wearing out the Italian's front leg while dodging most of his big punches.

Adesanya snaked out of another takedown and continued to work over Vittori with his feet to defend his title.

Figueiredo and Moreno fought in December, a draw that kept the title belt in Figueiredo's corner and denied Moreno's bid to become the UFC's first Mexican-born champion.

Like Adesanya and Vittori, the two flyweights verbally jabbed at each other in the fight's lead-up, the intense Figueirdo doing his best to get under the skin of the happy-go-lucky Moreno.

Moreno, the No. 1 flyweight contender, went after the Brazilian from the start in the rematch, stunning him with a big shot in the first round. He reversed a takedown in the second round and forced Figueiredo to submit with a choke 2 1/2 minutes into the third, sending roars echoing off the rafters.

Figueiredo put the bad blood aside after the fight, hugging then picking up the emotional Moreno to the delight of the crowd.

Charismatic welterweight Nate Diaz -- he lit up a joint at the pre-fight news conference -- returned to the octagon after a nearly two-year absence and was a massive crowd favorite, yet a big underdog by the oddsmakers against third-ranked Leon Edwards.

Edwards (19-3) showed why early, leaving Diaz bloodied by opening a gash above his left eye and another on the side of his head in the first non-title, five-round fight in UFC history.

The 36-year-old from Stockton, California, still had plenty of fight -- and showmanship -- left in him, wobbling Edwards with a big left in the fifth to bring the crowd off their feet.

The Englishman managed to evade Diaz (21-13) over the final minute and won by unanimous decision, putting himself in position for a possible title shot against Kamaru Usman. Diaz, who faces an uncertain future, invited everyone in the arena to his house for a party after the fight.

Light heavyweight Paul Craig opened the main card by breaking Jamahal Hill's arm in the first round, winning on a TKO when Hill couldn't defend himself while being pummeled to the head.