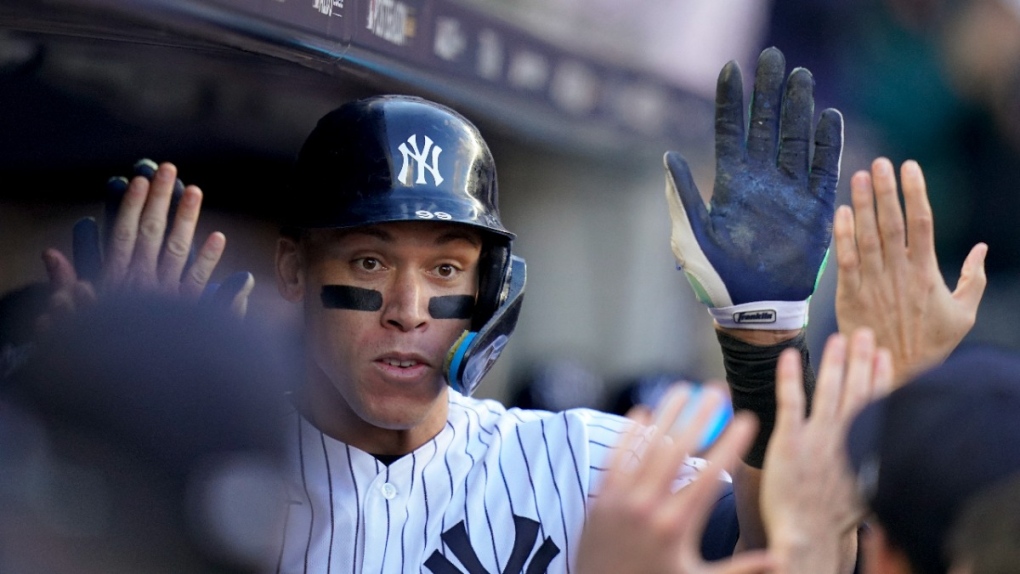 Aaron Judge has issued his ruling: Court remains in session in the Bronx.

Judge is staying with the New York Yankees on a $360 million, nine-year contract, according to a person familiar with baseball's biggest free agent deal ever.

The person spoke to The Associated Press on Wednesday on condition of anonymity because the AL MVP's contract had not been publicly announced.

New York general manager Brian Cashman declined to confirm the agreement. But he said he was "optimistic that we're in a good place," and he credited Yankees owner Hal Steinbrenner for the team's position while making reference to Hal's late father, George.

"I've been here a long time," said Cashman, who has been the Yankees' GM since 1998, "and I know how George Steinbrenner did business and how he went about doing business, in recruiting free agents and retaining free agents, and he was intimately involved. And I saw a lot of that in this process, too."

Cashman said he didn't get any sleep Tuesday night. He texted with Judge, and Hal Steinbrenner and manager Aaron Boone spoke with the slugger on the phone.

Judge, who hit an American League-record 62 homers last season, will earn $40 million per year, the highest average annual payout for a position player. The contract trails only Mike Trout's $426.5 million deal with the Los Angeles Angels and Mookie Betts' $365 million pact with the Los Angeles Dodgers for biggest in baseball history. Trout and Betts were already under contract when they signed those deals.

The Yankees made a long-term offer to Judge before last season that was worth $213.5 million over seven years from 2023-29. But the outfielder turned it down in the hours before opening day in April.

New York was swept by Houston in the AL Championship Series, but Judge became the first AL MVP for the Yankees since Alex Rodriguez in 2007.

"He's an amazing player and an amazing person that certainly has the respect of everyone in that room," Boone said, "and guys look to him, look up to him."

By rejecting the Yankees' preseason offer, Judge gained $146.5 million and an extra two guaranteed seasons. The Northern California native also visited with the San Francisco Giants last month, and there likely were more teams monitoring the market for the slugger who turns 31 in April.

With his new long-term deal, Judge could be in line to become New York's first captain since Derek Jeter retired after the 2014 season. Cashman said any decision on a captain would be made by Hal Steinbrenner and his family.

"I'm for anytime a decision like that they want to make, I support that decision 110%," he said.

There was an erroneous Twitter report Tuesday that had Judge nearing a deal with the Giants, and Boone said it was "a long, rough day in a lot of ways."

"Kind of that pit in my stomach all day," Boone said at baseball's winter meetings in San Diego.

Judge's decision will have a domino effect on several teams and free agents. His status held up at least some of New York's offseason plans -- given the size of the contract -- but Cashman made it clear his team would wait patiently while Judge contemplated his options.

In the end, that approach worked.

"The hope is that (Hal Steinbrenner) is the Mariano Rivera of these negotiations and was able to close something out, put us in a great position," Cashman said. "But I can't officially say that's happened just yet."

Judge was selected by New York in the first round of the 2013 amateur draft and made his big league debut in 2016, homering in his first at-bat.

The average annual value of Judge's deal trails only New York Mets pitchers Max Scherzer and Justin Verlander, at $43.3 million. Verlander's deal was reached Monday and hasn't been announced, but a person familiar with it told the AP he would earn $86.7 million over two years.