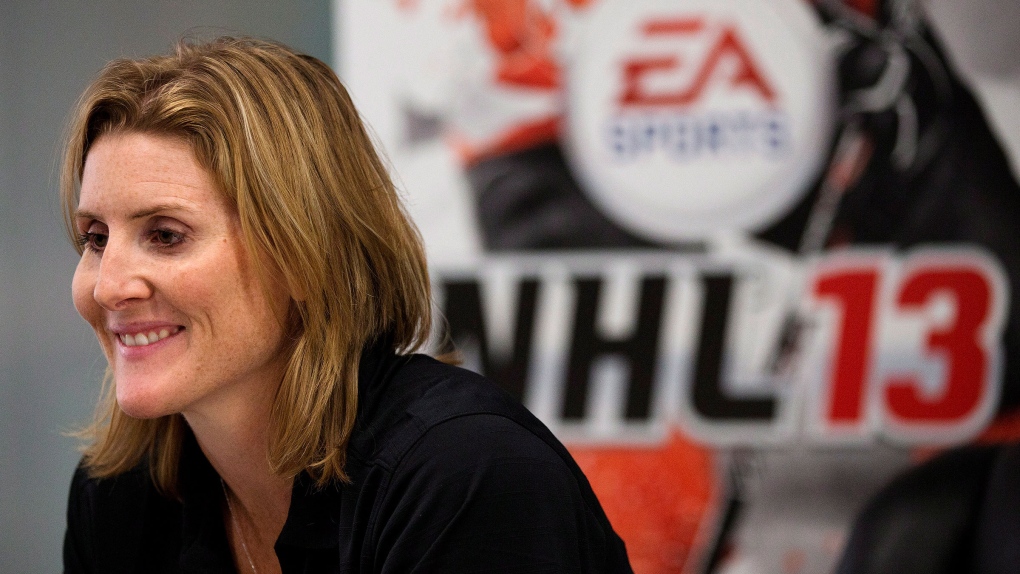 Hayley Wickenheiser, Olympic gold medalist hockey player and one of the first two female to be featured in a sports video game, speaks with The Canadian Press before the release of EA Sports' NHL 13 game in Toronto on Tuesday, Aug. 28, 2012. (Michelle Siu / THE CANADIAN PRESS)

Hayley Wickenheiser has retired from hockey after 23 years on Canada's women's team. Here is a look at her storied career:

1978: Born in Shaunavon, Sask., to Tom and Marilyn Wickenheiser.

1994: At age 15, plays in first of 13 women's world hockey championships and wins first of seven gold for Canada.

2000: Leads Canada with seven assists in five games to win fourth world championship in Mississauga, Ont. Utility player on softball team at the Summer Olympics in Sydney, Australia to become the second Canadian woman to compete in both a Summer and Winter Games.

2002: Leads Canada to Olympic gold in Salt Lake City with seven goals in five games and is named tournament MVP. A deal to play for men's team Merano falls apart because Italy's hockey federation won't allow her to play.

2003: Becomes the first woman to score a goal in men's pro hockey with Kirkkonummi Salamat, a second-division Finnish club. Has two goals and nine assists in 23 games, but ice time drops the following season when team earns promotion. Returns to Canada after totalling three goals and 16 assists in 40 games.

2004: Scores insurance goal for Canada in world championship final against the U.S. in Halifax and earns fifth gold medal.

2005: Becomes the first to score 100 goals for the national women's team Aug. 31 in a 3-1 win over Sweden. Ties for scoring lead on Canadian team and named a tournament all-star, but Canada loses world championship final in a shootout to the U.S. in Linkoping, Sweden. Children's book about her -- "Born To Play" -- is published.

2006: Leads Canada in scoring with five goals and seven assists to win Olympic gold in Turin, Italy, despite a broken hand suffered early in the tournament. Named Olympic MVP for a second time.

2007: Inherits Canada's captaincy after retirement of Cassie Campbell. Leads world championship scoring with eight goals, six assists in Winnipeg. Named tournament MVP and wins sixth gold. Tries out for the Swedish men's Division 1 team Arboga, but doesn't get a contract. Voted female athlete of the year by The Canadian Press.

2010: Wins third Olympic gold medal scoring two goals and assisting on nine in Vancouver. Commits to joining the University of Calgary women's team in the fall. Founds "Wickfest", an annual international hockey festival for girls. Publishes "Gold Medal Diary," chronicling her life in the months leading up to the Olympics.

2012: EA Sports makes her a player avatar when she is featured in the NHL video game. Ranks 24th on the Globe and Mail's "Power 50" List of the most influential people in Canadian sport. Leads Dinos to first women's university title with two goals and an assist in championship game. Leads Canada in scoring and named a tournament all-star in Burlington, Vt., for seventh world championship gold. She and Pacina end relationship, but share custody of Noah. Takes slapshot off left foot, which starts a spiral of problems with that foot.

2013: Injured in national university hockey semifinal and can't play in championship game for Dinos. Plays just three games at world championship in Ottawa because of a bulging disc in her back. Canada falls in final to U.S. Graduates with distinction from University of Calgary with a Bachelor of Kinesiology.

2014: Replaced as Canadian team captain by Caroline Ouellette. Canada's flag-bearer for opening ceremonies of Winter Olympics in Sochi, Russia. Ties for scoring lead on Canadian team and wins fourth Olympic gold despite a broken bone in her foot. Voted to International Olympic Committee Athletes' Commission. Has a screw surgically implanted in her foot. Joins actors Rachel McAdams and Ryan Reynolds in receiving a star on Canada's Walk of Fame in Toronto.

2015: Previous foot surgery unsuccessful, has a plate and eight screws implanted in left foot in February, which prevents her from playing in world championship and walking on the foot for four months. Commits to joining the CWHL's Calgary Inferno the following season.

2016: Assists on a pair of goals in the Calgary Inferno's Clarkson Cup win. Plays in 13th world championship, but hampered by lack of mobility in her foot and has one assist in five games in Kamloops, B.C. Graduates from University of Calgary with Masters degree in medical science.