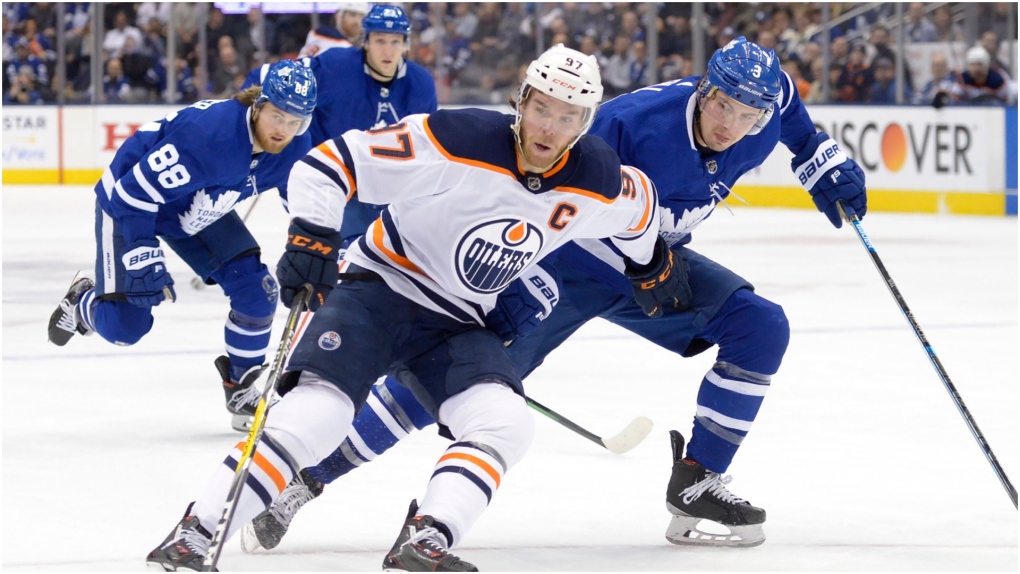 COVID-19 and the threat it poses to the NHL's plan to restart the 2019-20 season remains the overarching storyline as 24 teams prepare to open summer training camps Monday before heading to the hub cities of Edmonton and Toronto on July 26. With that firmly in mind, The Canadian Press takes a look at some of the hockey-related themes as the six clubs from north of the 49th parallel prepare to gather together as full groups for the first time since the schedule was suspended March 12.

The Flames will take on the Winnipeg Jets in the only all-Canadian matchup of the best-of-five qualifying round that leads into the usual 16-team playoff bracket. Calgary is slated to be without Travis Hamonic after he opted out of the return plan due to "family considerations." Calgary will miss the steady defenceman against Winnipeg's firepower up front, but perhaps even more pressing will be the need for Johnny Gaudreau and Sean Monahan to find their offensive games against Vezina Trophy candidate Connor Hellebuyck in the Jets' goal following sub-par regular seasons. The Flames will also need a big performance from winger/leading scorer/general pest Matthew Tkachuk after Calgary was stunned by Colorado in the first round of last spring's playoffs following a 107-point campaign.

Led by Connor McDavid and Leon Draisaitl, the Oilers are set to take on the Blackhawks in the qualifying round. Edmonton sat 11 points clear of Chicago at the time the NHL suspended its schedule. Draisaitl won the regular-season scoring race with 110 points, 13 ahead of the second-place McDavid. Edmonton has the benefit of not having to travel to its hub city, and knows Rogers Place well, but that's where the advantage of playing in the Oilers' home rink probably ends. They also won't have Mike Green, who was acquired at the trade deadline from the Detroit Red Wings, after the blue-liner also chose to opt out, citing "deeply personal family health reasons." The Blackhawks were all but eliminated from playoff contention back in March, but were handed a lifeline by the NHL's return-to-play plan. The series looks like a mismatch on paper, but don't discount the pedigree of a team led by three-time Stanley Cup champions Jonathan Toews and Patrick Kane.

Like the Blackhawks, the Canadiens were playing out the string back in March, but now find themselves with an opportunity to write an incredible story. Montreal will take on the Pittsburgh Penguins, who sat 15 points clear of the Habs at the time the league shut down, in the qualifying round. The Canadiens suffered through two excruciating eight-game losing streaks this season, and were also cut down by a number of injuries. And while they'll be heavy underdogs against Pittsburgh's battle-tested group led by Sidney Crosby and Evgeni Malkin, Montreal has playoff experience of its own in Shea Weber, Brendan Gallagher and Carey Price.

The Leafs were experiencing a rollercoaster season before the pandemic struck. From off-ice controversy, to finally naming a captain, to a coaching change, to playing well below expectations, Toronto's 2019-20 was never dull. Now the club will take on the Columbus Blue Jackets in the qualifying round for the right to make the playoffs. Auston Matthews took a big step forward, having already set career-highs with 47 goals and 80 points when the schedule was halted. But after The Toronto Sun reported last month the star centre tested positive for COVID-19, there are obvious questions about his ability to play at the highest level when the games start to count Aug. 1. Toronto has plenty of firepower apart from Matthews, including Mitch Marner, John Tavares and William Nylander, but the play of netminder Frederik Andersen could be the difference against a bruising Columbus team that will get a big boost with the return of a healthy Seth Jones on its blue line.

Another contrast in styles sees the Canucks take on the Wild in the qualifiers. Vancouver is led by its young core of Elias Pettersson, Quinn Hughes and Brock Boeser. Hughes and Pettersson both said recently they felt physically refreshed after the long break forced on the league by the coronavirus. Both can expect plenty of attention from Minnesota's veteran roster and strong defence corps led by Ryan Suter. How they deal with that could be the difference. Vancouver goalie Jacob Markstrom is the main reason the Canucks looked primed to make the playoffs for the first time since 2015 before the campaign was shut down. Vancouver's thin on post-season experience, but that could be a good thing in a scenario like no other.

After the Jets lost some massive pieces on their blue line last summer, Hellebuyck stepped up and kept Winnipeg in the fight. The netminder was 31-21-5 with a 9.22 save percentage and a 2.57 goals-against average in 2019-20 and is the main reason the Jets found themselves in a playoff spot back in March. Winnipeg and Calgary played just once in the regular season, and that was an outdoor game in Regina, so neither team has much to go on in terms of recent head-to-head play. Kyle Connor scored 38 times for the Jets this season, while Mark Scheifele (29), Patrik Laine (28) and Blake Wheeler (22) also cracked the 20-goal mark.

This report by The Canadian Press was first published July 12, 2020.