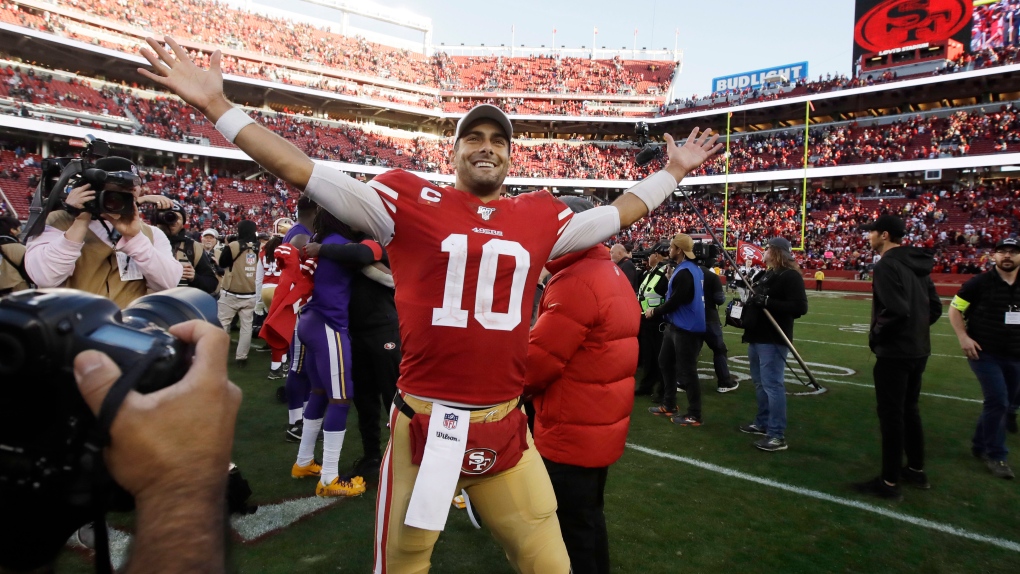 The San Francisco 49ers are one win away from accomplishing a turnaround that's been done only once before in the Super Bowl era.

With a victory in the NFC championship game at home on Sunday against the Green Bay Packers, the Niners will become the second team in NFL history to make the Super Bowl a year after losing at least 12 games.

Only the St. Louis Rams have done it, going from 4-12 in 1998 to Super Bowl champs one year later thanks in part of an injury to Trent Green that cleared the way for Kurt Warner to take over at quarterback.

The 49ers (14-3) also can credit an injury to their quarterback for part of their turnaround; the team went only 4-12 last season after Jimmy Garoppolo went down with a season-ending knee injury in Week 3.

The silver lining to that injury was the No. 2 overall pick in the draft, which led to the addition of defensive end Nick Bosa, who helped transform the defence into one of the league's best.

The Packers (14-3) have also had an impressive turnaround after slumping to a 6-9-1 record last season that led to the firing of longtime coach Mike McCarthy.

Matt LaFleur came in and tinkered with the offence, and general manager Brian Gutekunst brought in key additions such as pass-rushing duo Preston Smith and Za'Darius Smith, who combined for 25 1/2 sacks on the season.

There have also been some lower-profile pickups such as Tyler Ervin, Jared Veldheer and Marcedes Lewis that have helped.

"I think he's done a great job. I think he deserves a lot of credit, him and his staff," quarterback Aaron Rodgers said of Gutekunst. "There's been a lot of great pickups, but I think I said this at my locker a few weeks ago, the big-name ones have been fantastic, but it's kind of the other ones that have been the glue pieces, I feel like."

These teams played earlier this season in Week 12 in what turned out to be a lopsided game. Rodgers lost a fumble on Green Bay's first possession, setting up a 2-yard TD drive that gave San Francisco the lead. The Niners then broke it open with long TD passes to Deebo Samuel late in the second quarter and George Kittle in the third quarter for a 37-8 win. Rodgers had the worst day of his career, averaging 3.2 yards per attempt and getting sacked five times.

Niners coach Kyle Shanahan has a message for anyone on his team feeling overconfident.

"Don't be that stupid because that's not real," he said. "This is about Sunday's game. I can give a thousand stories of things like that, playing games in my history I've been a part of."

There have been 23 times in the Super Bowl era, excluding one replacement player game in 1987, that a team lost a regular-season game by at least 28 points to a team it met again in the playoffs. In nine of those cases, the team that got blown out earlier in the season came back to win in the playoffs.

Rodgers and star receiver Davante Adams both hail from Northern California, with Rodgers growing up in Chico and Adams in Palo Alto, which is near Santa Clara. Both played college ball in the state, Rodgers going to Cal and Adams to Fresno State. But neither ended up with the 49ers, who famously passed on Rodgers with the No. 1 overall pick in the 2005 draft for Alex Smith.

"I usually dreamed about playing for the 49ers as a kid, but obviously that thing passed a long time ago," Rodgers said when asked if he envisioned playing the Niners in the playoffs.

These two franchises that have combined for nine Super Bowl titles have a rich history when it comes to the playoffs. This will be their eighth meeting in the past 25 postseasons, three more than any other rivalry. In fact, the only other matchup to occur more often is Cowboys-Rams, which happened nine times. Green Bay has a 4-3 edge but the 49ers won the last two meetings following the 2012 and '13 seasons.

"We've had a lot of games and had some big games in the playoffs," 49ers left tackle Joe Staley said. "Seem to find each other all the time during the regular season, as well. A team that we are familiar with and we've had a lot of great battles with throughout the years."

Tevin Coleman got the starting nod at halfback for the 49ers the last nine weeks of the regular season even though he averaged only 3.2 yards per carry and 23.6 yards per game. But Coleman justified that confidence in last week's playoff opener against Minnesota when he ran 22 times for 105 yards in a 27-10 win.

"Tevin's ran hard for us all year," Shanahan said. "I know he had much better results yesterday, or Saturday. I think a lot of it had to do with the opportunities he got. He got more opportunities. He was running real hard."

The one weakness on the 49ers defence of late has been cornerback Ahkello Witherspoon, who has been picked on repeatedly as teams avoid Richard Sherman. Witherspoon has allowed all five TD passes given up by San Francisco the past three games and was benched for Emmanuel Moseley in the first quarter last week after getting beaten for a 41-yard TD by Stefon Diggs. Shanahan hasn't said what his plan is for this week, but it seems likely Moseley will get the nod after faring well in nine games as a starter earlier this season when Witherspoon was hurt.

There are plenty of close ties between the coaching staffs based on past history together. But none is as strong as the one between Matt LaFleur and his younger brother Mike, who is passing game co-ordinator in San Francisco. When the teams played in the regular season, Matt's family came out early and spent the weekend with Mike's family. That won't be the case this time.

"I think there's a little different vibe, so I'll just leave it at that," Matt LaFleur said. "I haven't really talked to him much at all and it will probably be that way for the remainder of the week."