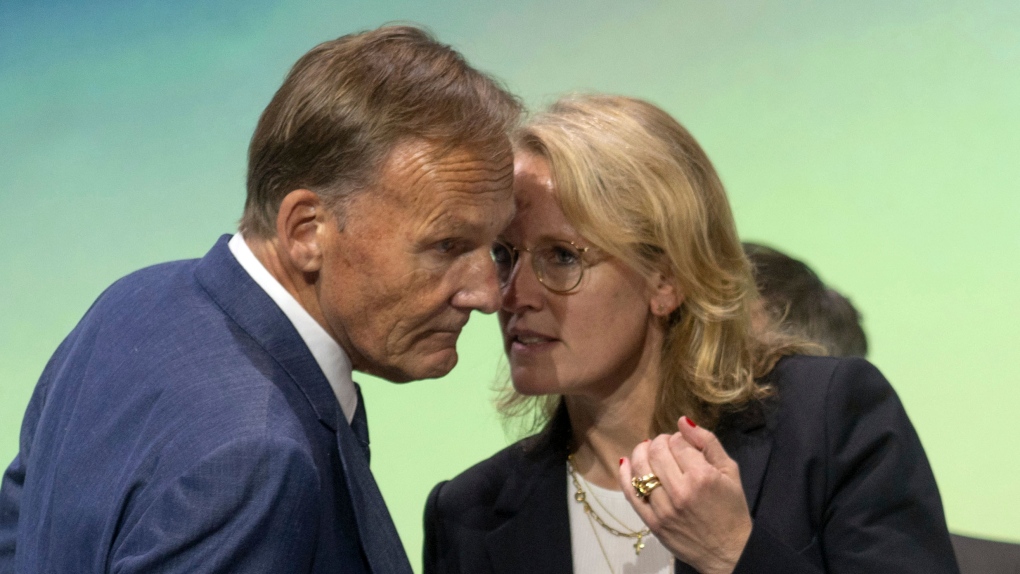 Donata Hopfen, right, then managing director of DFL GmbH, and Hans-Joachim Watzke, left, chairman of the DFL supervisory board, talk during a DFL meeting in Dortmund, Germany, Wednesday, Aug. 17, 2022. The German soccer league is replacing its first ever female CEO with two men. Hopfen is leaving her role as the head of Germanyâ€™s top two soccer divisions after less than a year in charge. (Bernd Thissen/dpa via AP,file)
BERLIN -

The German soccer league is replacing its first female CEO with two men.

Axel Hellmann and Oliver Leki are to take over with immediate effect from Donata Hopfen, who is leaving her role as the head of Germany's top two soccer divisions after less than a year in charge.

League supervisory board chairman Hans-Joachim Watzke said on Thursday that Hellmann, from Bundesliga club Eintracht Frankfurt, and Leki, from league rival Freiburg, will take over on an interim basis through June 2023.

Watzke said both men were involved in important negotiations for the league in a five-member commission with Hopfen and were familiar with issues involving Germany's Federal Cartel Office and potential investors.

"If you were to take someone from outside, then they would need so much time to familiarize themselves with the process -- time that we don't have," Watzke said.

The league on Wednesday said it reached a mutual agreement with Hopfen to cut short her three-year contract because of "differing ideas about the further strategic direction of the company."

Hopfen struggled to impose her vision or resolve longstanding questions on issues such as the league's 50+1 rule limiting the role of outside investors, marketing at home and abroad, and the sale of media rights.

She suggested in a social media post she did not receive the support she needed from league members to make required changes to longstanding structures.

"A separation, even if it's mutual, whether you believe that or not, always leaves a mark. These are not pleasant things to talk about," Watzke said.

Asked why Hopfen was appointed a year ago if there were such differences of opinion between her and the league, Watzke said it was a "good question," but he wasn't there at the time.

"We always tried to work together in a spirit of trust," he added. "But at the end of the day, when you realize you're drifting apart -- and that was the point we reached -- then you separate."

Watzke, who is also the Borussia Dortmund CEO and vice president of the German soccer federation, stressed the need for clubs to stick together for the greater good and said Bayern Munich as the league's "biggest and most successful club" needed to be involved.

Watzke defended the league's 50+1 rule, saying it was important to keep ticket prices for games low and accessible for families.

"In Germany, we are in a much better position than others in terms of admission prices. And, of course, that would disappear if 50+1 goes," Watzke said.

The 50+1 rule, which states that clubs must retain most voting rights, has been questioned by the cartel office, which last year suggested the rule could distort fair competition because of exemptions enjoyed by Bayer Leverkusen, Hoffenheim and Wolfsburg -- all clubs who have been supported for more than 20 years by their backers.

Watzke said he was confident a joint solution can be found with the cartel office.

"And this, of course, would make it much more difficult to attack the 50+1 rule," said Watzke, who said it was "utter nonsense" to suggest it limits the money clubs can raise from investors.

"FC Bayern or Borussia Dortmund, we have investors, we have shareholders," Watzke said. "There's only one thing -- we don't want the investor to say, `Give me the car key and you take the bus.' That's the only concern. But any investor who seriously wants to invest money in a club in Germany can do so."

Watzke also said there was more potential for clubs' growth in foreign markets, but that no German competitions will take place abroad.

"We won't do that," Watzke said. "Anyone who knows how I feel, knows that."