11 hole-in-ones in six months: Is this the hottest golfer on the planet? 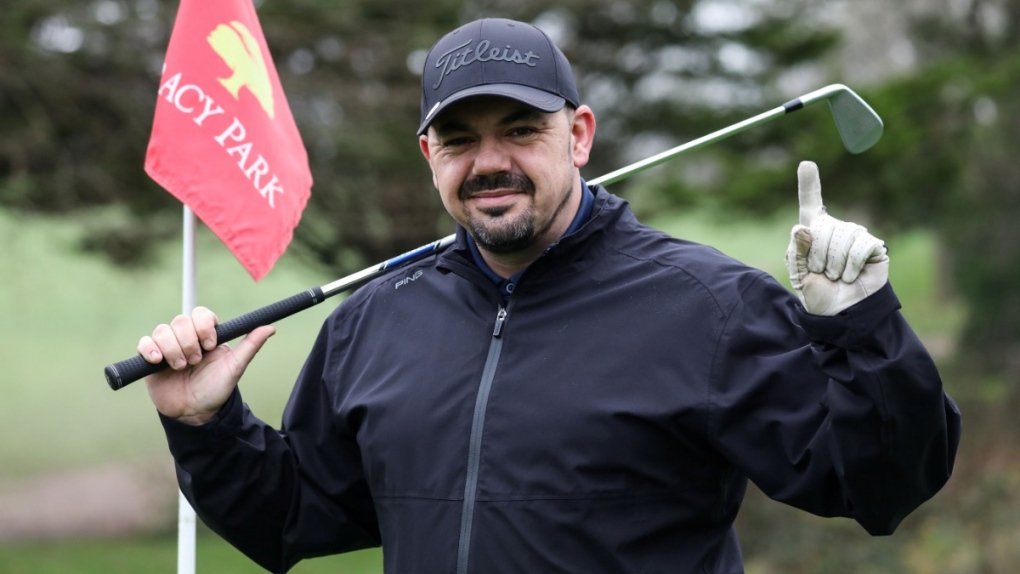 British amateur golfer Neil Watts is very much the world's go to hole-in-one guy at the moment -- he's hit 11 aces in the last six months.

Although the odds of professional golfers hitting a hole-in-one are significantly higher than your average player, they still may go their whole career without achieving that feat.

According to the National Hole-in-One Registry, the odds of a tour player hitting a hole-in-one are 3,000-to-1, while for average players they are 12,000-to-1.

Watts hit his first ever ace in June 2021, with a further 10 coming in the next few months.

The British golfer really aced it during an interview with British broadcaster ITV in December when he hit a hole-in-one while the cameras were rolling.

Watts remembers being given a box of balls specifically by the Tracy Park pro shop -- the golf club where he's achieved his feat -- for the interview.

He hit the first 10 balls before the interview and was then asked to hit the remaining balls for some more footage.

"And I did it on the I think it was on the 15th golf ball. I got the hole-in-one," Watts told CNN Sport. "But I didn't think he'd set up the camera, to be honest.

"Because I turned round to him and I said: 'That'll be close because that was like the one I had before on the hole.'

"And when we got up there, the cameramen went to the hole, he said: 'There is one in the hole,' and we all said: 'Don't be silly.' And he said: 'No, I'm not joking, there's a ball in the hole.' And it was one of the ones they gave us from the pro shop.

"It was brilliant. And lucky enough, he had it filmed. He had the camera on the green at the time, so it showed the ball going in as well."

GETTING ON A RUN

Watts has been playing golf for over 35 years, starting out as a five-year-old when his dad threw balls to him and he would hit them.

But nothing could prepare himself for the hot streak he's been on since June.

Watts vividly remembers his first hole-in-one, which came on the 12th hole of the Cromwell course at Tracy Park.

"I actually saw the ball go in. It was absolutely lovely. It was two bounces and actually just rolled into the hole then," said Watts.

"That was the first one. And I was over the moon with that, obviously, having the first hole-in-one ever. I think my teammates that I was playing with at the time were more excited than what I was, to be honest with you."

His second came two weeks later during the club's championship in a round with the owner of the Tracy Park club.

It was only when he aced a few more hole-in-ones that Watts started to really ponder his extraordinary run.

"I was like: 'Oh my God, I can't believe this is obviously happening at the moment,' because you could go a whole lifetime without having a hole-in-one. And in six months, it's all just gone a bit ballistic really with everything," he said.

"Like every time I was going out then I was feeling confident that I was going to get another one because that's how it made me feel at the time."

Watts says he's had friends and family reach out to him from Australia and New Zealand to congratulate him.

Inevitably he is asked the question as to what is the secret to hitting a hole-in-one.

As well as practicing your swing and focusing on accuracy, Watts says it's important to believe you can achieve the feat.

He's also honest enough to admit that there is something "weird' about hitting 11 hole-in-ones -- 10 of which came on par threes and one on a par four -- in such a short period of time and he can't really explain the phenomenon.

"Still every time I play on the golf course, every time I hit the ball, someone's shouting somewhere from the course: 'Get in the hole.' When I look over or when I come in, everyone's asking with the same questions: 'Have you got one today?'"

Golf tradition dictates that if a player hits a hole-in-one, they must then buy a drink for everyone in the bar in the clubhouse after completing their round.

Watts twice upheld this tradition, but as it was "very costly," he's had a rethink on his generosity.

"When I did it the third time, I learned I had to put the key in the car and actually get out pretty quick after I got back. Otherwise, it'd cost you an absolute fortune to do it."

It is unclear the actual record for the most hole-in-ones in a single career, professional or amateur, but Watts has his eyes set on around 20 for his career.

He's already bested the most by a player on the PGA Tour. Since 1983, Robert Allenby and Hal Sutton each have 10, the most recorded hole-in-ones on the Tour.