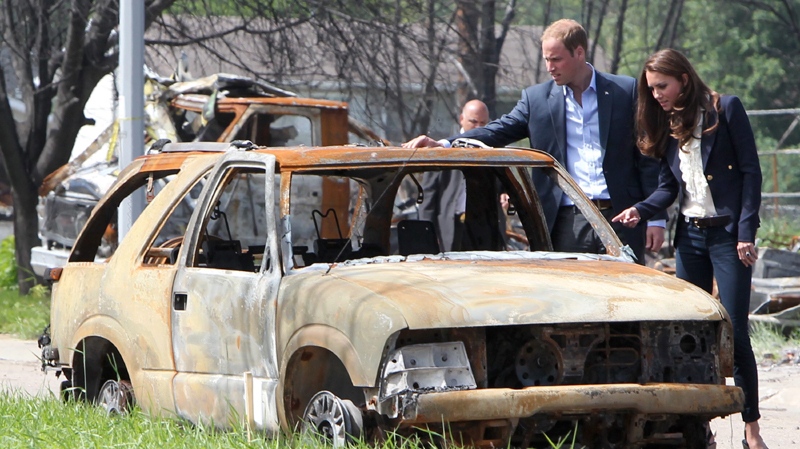 The Duke and Duchess of Cambridge look at a burned-out car in Slave Lake, Alta., on Wednesday, July 6, 2011. (Jonathan Hayward / THE CANADIAN PRESS)

He was going to rebuild his burned down house like hundreds of others and continue to make Slave Lake his home.

But he's tired of fighting with his insurance company and waiting for construction to begin on the levelled lot now blanketed with snow.

"My life's a total mess," says Khan, a 15-year resident of the northern Alberta community devastated by a raging forest fire last spring. "I've come to terms with the fact that I have no choice but to move on."

Khan and his wife, Dr. Jacintha Ramlall, will be moving with their two children next month to the Calgary bedroom community of Okotoks.

They're not the only ones waving goodbye to Slave Lake. Town officials don't have specific figures, but about 30 families have indicated they're leaving too.

Five of 18 RCMP officers have also transferred to new detachments since the fire. Staff Sgt. Roberta McKale says some of the officers had already been scheduled to leave and others who lost their homes decided it was easier to start over somewhere else.

"The majority of members have felt it's a community deserving of having a commitment," she says. "There are a lot of people digging and working through this."

Roughly one-third of the community -- nearly 400 homes and businesses, including an apartment complex -- was reduced to ash and rubble in May when fierce winds whipped a wildfire through the town with little warning. Most residents had minutes to flee.

Other than scrapes and minor burns, no one was injured. But 2,000 were left homeless. The town's new government building, including the library, was lost, as well as two churches and the radio station.

Damage was pegged at $700 million, which insurance adjusters estimate makes it the second-costliest disaster in the country next to the Quebec ice storm of 1998.

Khan says it doesn't matter that his family lost everything in the fire. They're happy to be alive.

He remembers running through his burning house to make sure his loved ones had escaped. His hair was scorching, household items were melting into the floor, windows were shattering and parked cars outside were exploding.

Months later, another "nightmare" with his insurance company began, he says. Construction has started on about 150 new homes and families have moved into two that are finished. But Khan says delays with his insurance mean he can't get a new house until early 2013.

That's too long to wait, he says. The doctor was sleeping at the senior's lodge in Slave Lake for several months before he recently moved into a mobile home with former neighbours. His wife and children were couch surfing at friends' homes, then settled temporarily in Edmonton. Khan is travelling back and forth to see them.

Making it even harder is that three other doctors are planning on leaving Slave Lake, although not for fire reasons.

Khan says it was a tough decision to move permanently, but his family needs stability. The hardest part has been telling his patients.

"There were lots of tears on both our parts," says Khan. "There still is."

Martha Urquhart has been renting a house in Edmonton since the fire and says she's not planning to return to Slave Lake, at least until her 15-year-old son is done school.

"I'm not going to be uprooting him again."

There have been visits to the community and her 18-year-old daughter decided to return and live with friends there. Urquhart says it's a great town and she wishes everyone the best in rebuilding.

"There's a lot of really good people in Slave Lake. They already built a community once. There's no reason they can't do it again."

The last of 189 temporary mobile homes was recently hauled into one of three new subdivisions set up to shelter those crowded in with friends or staying in campers. It was a feat to complete the project in six months when many said it would take more than a year, says Mayor Karina Pillay-Kinnee.

She says although some residents have decided to leave the community, the majority are toughing it out and more are moving in. The town is getting its typical winter season boost from the surrounding oil and gas industry, and about 400 tradespeople are expected to be working in town each day over the next two years.

Pillay-Kinnee says tourism may be another burgeoning industry for Slave Lake. The town received attention from around the globe after the fire, especially when Prince William and his bride, Kate, stopped for a quick visit in July to boost the morale of weary residents.

Attention also came in the form of donations: too many truckloads of clothing, furniture and other goods to count, $5 million in funds for the Canadian Red Cross and $750,000 for the town. The mayor says some of the money will be spent on major projects such as a new athletic park and an evacuation centre.

Experts are already warning the town of a very dry spring ahead, says Pillay-Kinnee. Town officials are working on a plan to better handle an evacuation, possibly with social media messages and a new siren system.

Many residents say they are still angry they didn't have enough warning about the fire and that there was no evacuation call. Adding fuel to their frustration is a recent government announcement that the fire was deliberately set. RCMP continue to investigate.

"I think it's going to take a lot of years for people to quit being angry," says Roland Lavallee, who describes fleeing the fire as the scariest moment of his life. He didn't lose his home, so he counts himself lucky. But houses just two blocks away were wiped out, so he also feels guilty.

"You have to drive through what was burned everyday."

Judith Kulig, a University of Lethbridge researcher who has been studying the emotional toll on Slave Lake families, says many regained hope after new homes started going up.

But most are likely to go through the typical grieving process for at least one year.

"It is quite a feeling to lose everything and start over again from square one," adds retired school teacher Dianne Tchir.

Her rental home burned and all of her belongings with it. Her husband, who suffers from dementia, was moved from the town's long-term care nursing home during the fire and sent to various facilities in surrounding communities.

There were several moves and they all took a toll on his health, says Tchir. Lazard Shyry never made it back to Slave Lake. He died one month after the fire.

"I just want 2011 gone, like most people," says Tchir, now living in her own mobile home. "Mother Nature will heal herself, but it's going to take a very long time before people feel really, really healthy, inside and out."

Some numbers related to the Slave Lake fire and its aftermath: