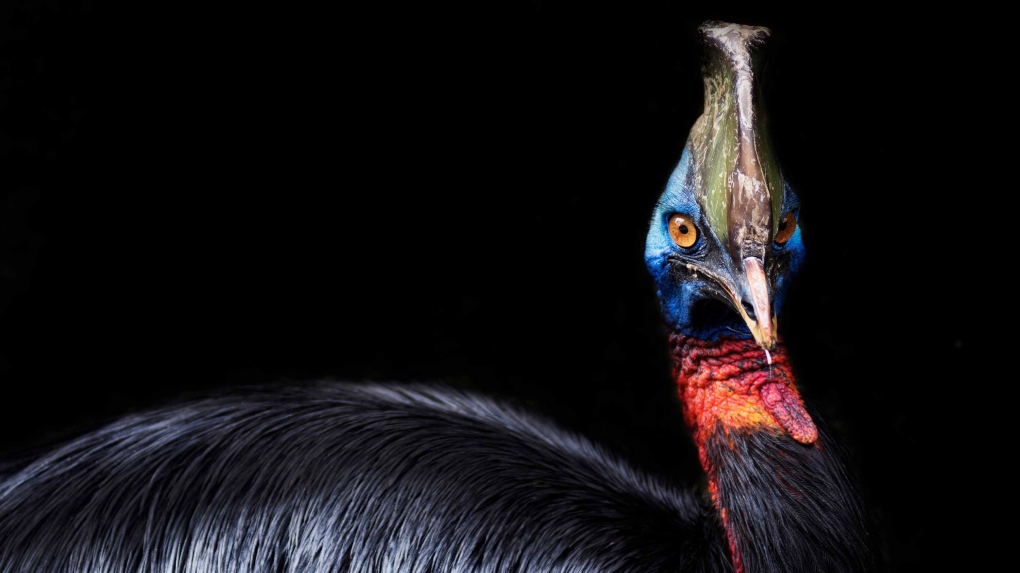 A cassowary can be aggressive, but it "imprints" easily -- it becomes attached to the first thing it sees after hatching. This means it's easy to maintain and raise up to adult size. (Shutterstock via CNN)

The earliest bird reared by humans may have been a cassowary -- often called the world's most dangerous bird because of its long, dagger-like toe.

Territorial, aggressive and often compared to a dinosaur in looks, the bird is a surprising candidate for domestication.

However, a new study of more than 1,000 fossilized eggshell fragments, excavated from two rock shelters used by hunter-gatherers in New Guinea, has suggested early humans may have collected the eggs of the large flightless bird before they hatched and then raised the chicks to adulthood. New Guinea is a large island north of Australia. The eastern half of the island is Papua New Guinea, while the western half forms part of Indonesia.

"This behaviour that we are seeing is coming thousands of years before domestication of the chicken," said lead study author Kristina Douglass, an assistant professor of anthropology and African studies at Penn State University.

"And this is not some small fowl, it is a huge, ornery, flightless bird that can eviscerate you," she said in a news statement.

The researchers said that while a cassowary can be aggressive (a man in Florida was killed by one in 2019), it "imprints" easily -- it becomes attached to the first thing it sees after hatching. This means it's easy to maintain and raise up to adult size.

Today, the cassowary is New Guinea's largest vertebrate, and its feathers and bones are prized materials for making bodily adornments and ceremonial wear. The bird's meat is considered a delicacy in New Guinea.

There are three species of cassowary, and they are native to parts of northern Queensland, Australia, and New Guinea. Douglass thought our ancient ancestors most likely reared the smallest species, the dwarf cassowary, that weighs around 20 kilograms (44 pounds).

The fossilized eggshells were carbon-dated as part of the study, and their ages ranged from 18,000 to 6,000 years old.

Humans are believed to have first domesticated chickens no earlier than 9,500 years ago.

To reach their conclusions, the researchers first studied the eggshells of living birds, including turkeys, emus and ostriches.

The insides of the eggshells change as the developing chicks get calcium from the eggshell. Using high-resolution 3D images and inspecting the inside of the eggs, the researchers were able to build a model of what the eggs looked like during different stages of incubation.

The scientists tested their model on modern emu and ostrich eggs before applying it to the fossilized eggshell fragments found in New Guinea. The team found that most of the eggshells found at the sites were all near maturity.

"What we found was that a large majority of the eggshells were harvested during late stages," Douglass said. "The eggshells look very late; the pattern is not random."

These late-stage eggshells indicate people living at these two rock shelter sites were harvesting eggs when the cassowary embryos had fully formed limbs, beaks, claws and feathers, the study said.

But were humans purposefully collecting these eggs to allow them to hatch or collecting the eggs to eat? It's possible they were doing both, Douglass said.

Consuming eggs with fully formed embryos is considered a delicacy in some parts of the world, but Douglass said the research team's analysis suggested people were hatching the chicks.

"We also looked at burning on the eggshells," Douglass said in the news release. "There are enough samples of late stage eggshells that do not show burning that we can say they were hatching and not eating them."

Less mature eggshells showed more signs of burning -- suggesting that when cassowary eggs were consumed they were cooked and eaten when their contents were primarily liquid.

"In the highlands today people raise cassowary chicks to adulthood, in order to collect feathers, and consume or trade the birds. It is possible cassowaries were also highly valued in the past, since they are among the largest vertebrate animals on New Guinea. Raising cassowaries from chicks would provide a readily available source of feathers and meat for an animal that is otherwise challenging to hunt in the wild as an adult," she explained via email.

However, there is still much the researchers don't know.

To successfully hatch and raise cassowary chicks, people would need to know where the nests were, know when the eggs were laid and remove them from the nest just before hatching. This is no easy feat as birds don't nest at the same sites each year. Once a female lays the eggs, male birds take over nest duty and don't leave for 50 days while incubating the eggs.

"People may have hunted the male and then collected the eggs. Because males don't leave the nest unattended they also don't feed much during the incubation period making them more vulnerable to predators," she said.

The research was published in the peer-reviewed scientific journal PNAS on Monday.