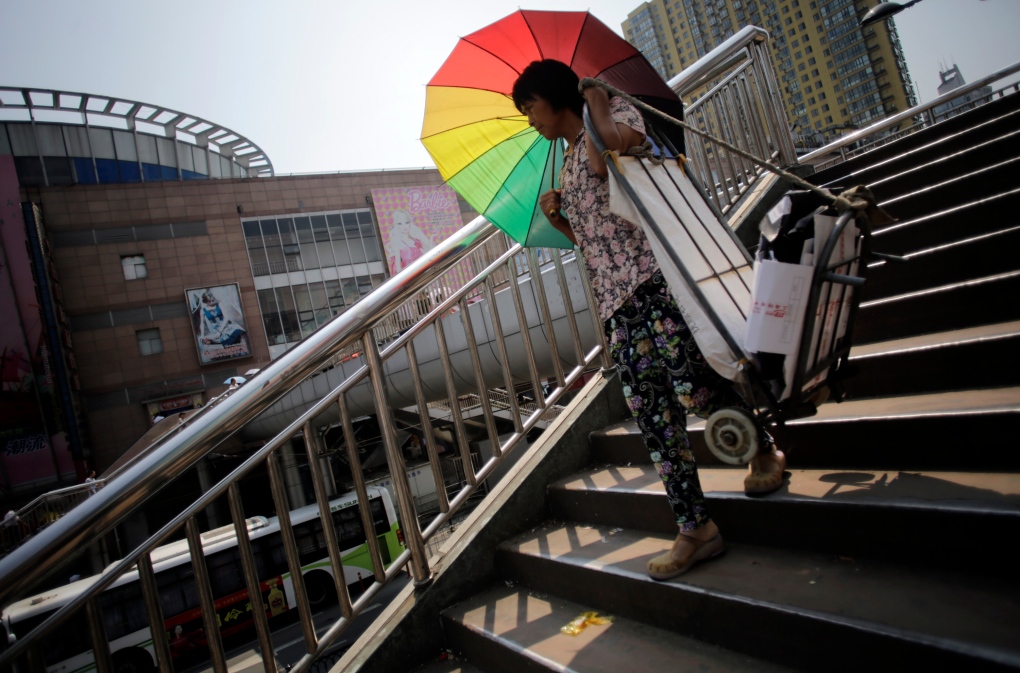 A woman courier with a parasol walks down a pedestrian bridge in the hot summer sun in Shanghai, China, Thursday, Aug. 1, 2013. (AP / Eugene Hoshiko)

WASHINGTON -- Last year tied for the fourth hottest year on record around the globe.

The average world temperature was 58.12 degrees (14.52 Celsius) tying with 2003 for the fourth warmest since 1880, the National Oceanic and Atmospheric Administration said Tuesday.

At the same time, NASA, which calculates records in a different manner, ranked last year as the seventh warmest on record, with an average temperature of 58.3 degrees (14.6 Celsius). The difference is related to how the two agencies calculate temperatures in the Arctic and other remote places and is based on differences that are in the hundredths of a degree, scientists said.

Both agencies said nine of the 10th warmest years on record have happened in the 21st century. The hottest year was 2010, according to NOAA.

The reports were released as a big snowstorm was hitting the U.S. East Coast.

"There are times such as today when we can have snow even in a globally warmed world," said Gavin Schmidt, deputy director of NASA's Goddard Institute of Space Studies in New York. "But the long term trends are not going to disappear ... Quite frankly people have a very short memory when it comes to climate and weather."

Those longer trends show the world has seen "fairly dramatic warming" since the 1960s with "a smaller rate of warming over the last decade or so," said Thomas Karl, director of NOAA's National Climatic Data Center. In the past 50 years, the world annual temperature has increased by nearly 1.4 degrees (0.8 degrees Celsius), according to NOAA data.

Unlike 2012, much of the worst heat and biggest climate disasters last year were outside the U.S. Parts of central Asia, central Africa and Australia were record warm. Only a few places, including the central U.S., were cooler than normal last year.

Temperatures that were only the 37th warmest for the nation last year. That followed the warmest year on record for the U.S.

Last year, the world had 41 billion-dollar weather disasters, the second highest number behind only 2010, according to insurance firm Aon Benfield, which tracks global disasters. Since 2000, the world has averaged 28 such billion dollar disasters, which are adjusted for inflation.

Nearly half of last year's biggest weather disasters were in Asia and the Pacific region, including Typhoon Haiyan, which killed at least 6,100 people and caused $13 billion in damage to the Philippines and Vietnam. Other costly weather disasters included $22 billion from central European flooding in June, $10 billion in damage from Typhoon Fitow in China and Japan, and a $10 billion drought in much of China, according to the insurance firm.

Usually the weather event called El Nino, a warming of the central Pacific, is responsible for boosting already warm years into the world's hottest years. But in 2013, there was no El Nino.

The fact that a year with no El Nino "was so hot tells me that the climate really is shifting," said Andrew Dessler, a Texas A&M University climate scientist, who was not part of either the NOAA or NASA teams.

For many people, global warming first hit the headlines in 1988 when NASA climate scientist James Hansen testified before Congress on a hot summer day. That year ended up the warmest on record at the time. But on Tuesday, it was knocked out of the 20 top hottest years by 2013.