World added an Amazon's worth of greenery in 2 decades: NASA 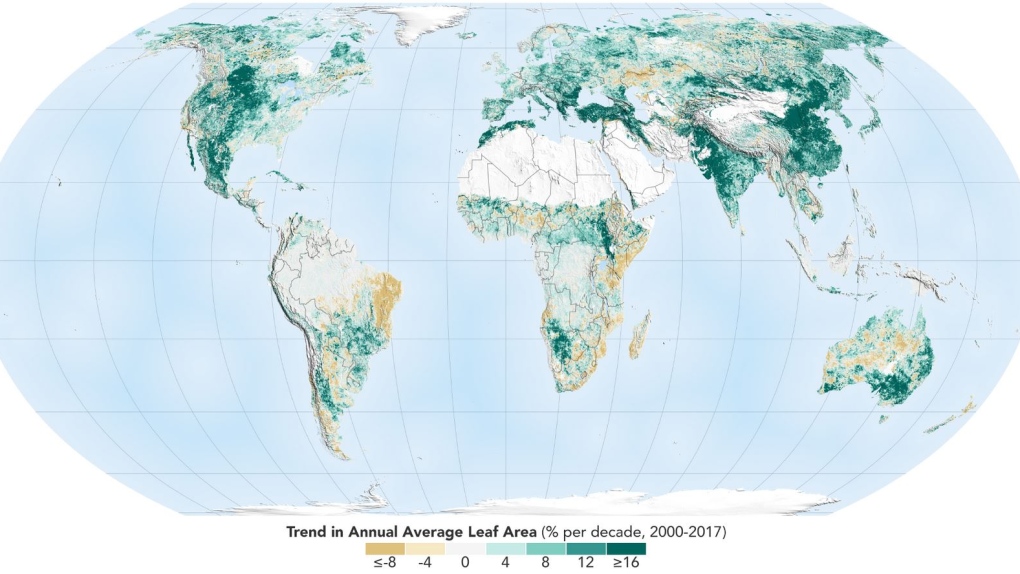 Areas with the greatest increase in foliage are indicated in dark green on this map from the NASA Earth Observatory.

NASA scientists say the Earth has added as much plant coverage as exists in all of the Amazon rainforest over the past two decades, in large part due to human activity in China and India.

The discovery, revealed in a new paper published in Nature Sustainability, was made using a satellite-mounted instrument known as the Moderate Resolution Imaging Spectroradiometer (MODIS) that has captured up to four images of every place on Earth daily since launching in 1999.

Rama Nemani, a scientist at NASA’s Ames Research Center and a co-author of the journal article, said that researchers initially thought the greening they observed was mainly “due to a warmer, wetter climate and fertilization from the added carbon dioxide in the atmosphere, leading to more leaf growth in northern forests, for instance.”

In fact, a substantial portion of the greening – at least one third but probably more – has come from humans planting trees and crops.

China accounts for one quarter of the increase, according to the researchers. Coverage there has grown 10 per cent in a single decade. About 42 per cent of the greening in China resulted from forest expansion and conservation programs put in place to prevent erosion, clean up air pollution and prevent climate change, according to NASA. Nearly a third of the greening in China was from agriculture, they say.

India had the second biggest increase, with nearly seven per cent growth in vegetation coverage over one decade. Nearly 82 per cent of the greening in India came from agriculture.

The land area used for agriculture in both China and India has remained stable over the period at about 2 million square kilometers in each country, but more intensive agriculture practices like planting crops several times per year has resulted in significant greening, according to NASA.

Canada and the European Union were also significant contributors to the greening, with more than four per cent growth in plant and tree coverage over one decade. Overall, vegetation cover increased about 2.3 per cent over one decade.

“Once people realize there’s a problem, they tend to fix it,” he said. “In the 70s and 80s in India and China, the situation around vegetation loss wasn’t good; in the 90s, people realized it; and today things have improved. Humans are incredibly resilient.”