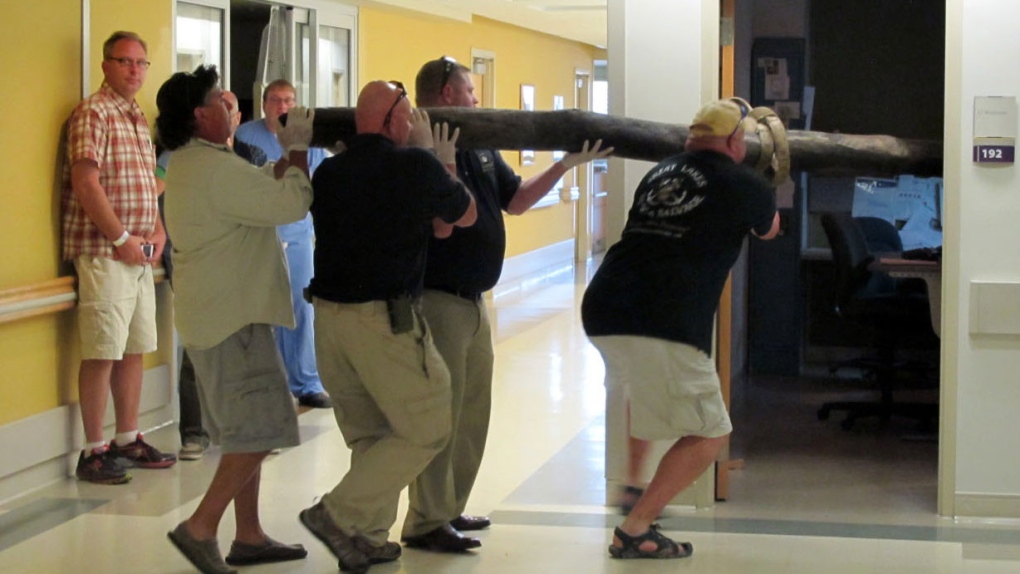 GAYLORD, Mich. -- Technicians at a northern Michigan hospital used a CT scan machine Saturday to take X-rays of a wooden beam that could be part of the Griffin, a ship commanded by the French explorer La Salle that has been missing for more than three centuries.

The procedure was the latest twist in a decades-old quest by diver and history buff Steve Libert to locate the vessel, which disappeared in 1679 after setting sail from an island near Lake Michigan's Green Bay with a crew of six and a cargo of furs. A dive team retrieved the timber in June after discovering to their disappointment that it wasn't attached to buried wreckage.

They hope the CT scan, which produced images of tree rings inside the beam, will help determine whether it was cut down around the time the Griffin was built. A Cornell University expert in dendrochronology -- a scientific technique that uses ring patterns to date trees -- has agreed to analyze the images, which were recorded on compact discs.

"It's very important," Libert said. "Now this comes down to science."

He said the timber could be the Griffin's bowsprit -- a spur or pole that extends from a vessel's stem. Michigan's state archaeologist, Dean Anderson, has said he isn't convinced the beam is part of a ship and contends it could be a stake from a "pound net," a type of fishing gear used in past centuries.

A small crowd watched, many snapping photos, as crewmen with Libert's Great Lakes Exploration Group unloaded the nearly 20-foot-long timber from a trailer at Otsego Memorial Hospital in Gaylord, about 225 miles northwest of Detroit. The hospital is near the timber's storage spot-- a location Libert is keeping secret to prevent theft or vandalism.

The oak beam has been submerged in water and preservative chemicals. One end is split, and three peg-like pieces of wood protrude from the side. Libert said they are "tree nails" and provide further evidence the beam was fashioned by humans.

For the scan, it was wrapped in a permeable fabric and placed inside a cradle made of PVC pipe. Eight men lowered the slab, which weighs about 400 pounds, onto dollies and wheeled it down a hallway to the hospital's radiology section, manoeuvring carefully around corners and through doorways. Then they donned rubber gloves and hefted it into the room with the scanning machine.

There, it was placed on an examining table usually occupied by patients being X-rayed to detect cancerous tumors, blockages in blood vessels or other internal ailments. The mechanical table eased one end of the timber -- a nearly five-foot-long section -- into the doughnut-shaped scanning machine, where a spinning X-ray camera recorded cross-section images of the interior. Readings were taken about an inch apart for 10 minutes.

The crew then lugged the timber into the hallway, turned it around and took it back for a scan of the other end.

A computer read the images and projected them onto screens in an adjacent room. Tree rings were clearly visible, and radiology director Andy Lanway said technicians counted at least 29. Carol Griggs, the Cornell specialist, has said 50 or more might be needed to determine when the tree was felled by matching ring patterns with those of other trees in the university's archive.

"I'm not sure it's going to be enough," Libert acknowledged. But he added, "There might be more rings. They might be so tight that we couldn't see them with the naked eye."

The rings weren't as clear as those of treated lumber that the hospital scanned earlier as a test, Lanway said. "That may be due to the age, or its being in the water for so long," he said.

Regardless of the outcome, Lanway said the hospital was glad to have taken part in the experiment.

"If this is what they think it is, it's of great historical significance," he said.

Griggs has said it could take up to a year to complete her study and write a report. If it's inconclusive, Libert said the next step might be extracting a core sample for a carbon 14 test, another dating method.

In the meantime, he said he intends to keep searching the floor of northern Lake Michigan near uninhabited Poverty Island for other signs of the Griffin, which he's convinced is nearby. He found the possible bowsprit there during a 2001 dive. But because of a legal dispute with the state over ownership of the timber, it took until this year to get permits to excavate the lakebed.

"Most of us think this is the Griffin," said Tom Gouin, vice-president of operations for Great Lakes Diving and Salvage, the Gaylord company that provided the dive crew. "We're all excited to get back out there and find the rest of it."