What this giant evaporating planet tells us about Earth's future 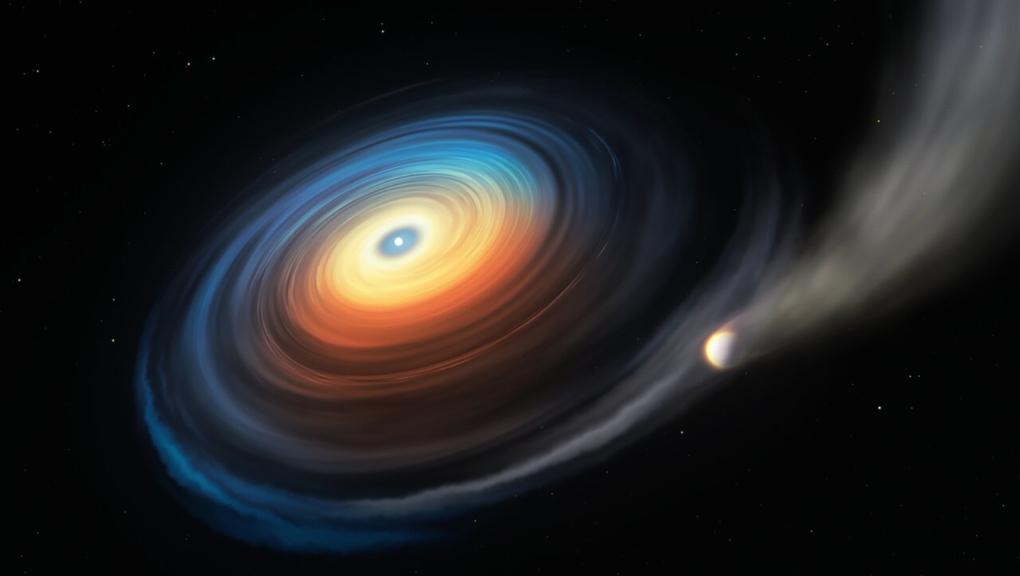 The white dwarf is stripping away the atmosphere of the ice giant planet orbiting it. (M. Kornmesser/ESO)

Stars live violent lives, and the planets around them don't always survive their brutal phases. But for the first time, astronomers have found evidence of a planet that survived a star's transition to death.

In what researchers called "one of those chance discoveries," they found an ice giant exoplanet -- a planet outside of our solar system -- orbiting an Earth-sized white dwarf.

When a sun-like star reaches the end of its life and burns through all of its fuel, it puffs up to form a red giant and blasts out about half of its mass. Nearby planets and asteroids become consumed by the blast.

A blazing hot white dwarf is left behind, and any planets and asteroids that survived move farther out because the star no longer has the same gravitational pull on them. White dwarfs cool slowly as they age.

In this case, the ice giant, a planet made of heavy gases similar to our solar system's Neptune, is about four times the size of the star. The planet completes a quick orbit around the star every ten days. Streaming out behind the planet is a tail, similar to that of a comet, made of hydrogen, oxygen and sulfur gas.

This is because the star is actually evaporating the planet. At 50,432 degrees Fahrenheit, the star is pummeling the ice giant with hot energetic bursts and pulling the mass lost from the planet into a disk around itself.

These findings were published Wednesday in the journal Nature.

The star, known as WD J0914+1914, is one of 10,000 white dwarf stars observed during the Sloan Digital Sky Survey, a project that created the most detailed 3D map of the universe. Astronomers studied the light from these stars to look for potential elements around them.

Tiny spikes of hydrogen were unexpectedly detected around this particular white dwarf. Then they detected oxygen and sulfur. This is the first time those gases have been identified around a white dwarf.

Follow-up observations made by the Very Large Telescope at the European Southern Observatory, using the telescope's X-shooter spectrograph instrument, revealed the shape of the gas to resemble a ring or disk.

Earlier this year, a citizen scientist found the coldest, oldest-known white dwarf surrounded by rings of dust and debris. Between 1% and 4% of white dwarfs emit a signal that indicates a dust ring or disk, possibly leftover from the asteroids and comets pulled around the star and ripped to pieces. Those pieces eventually float down to the star's surface.

"At first, we thought that this was a binary star with an accretion disk formed from mass flowing between the two stars," said Boris Gaensicke, lead researcher from the University of Warwick in the UK.

"However, our observations show that it is a single white dwarf with a disk around it roughly ten times the size of our sun, made solely of hydrogen, oxygen and sulfur. Such a system has never been seen before, and it was immediately clear to me that this was a unique star."

Data from the Very Large Telescope revealed that the star was actually pulling atmospheric sulfur and oxygen from this disk. The disk was similar in composition to the rings around the ice giants in our own solar system, Uranus and Neptune.

While they weren't able to directly take an image of the planet, the telltale disk and its gaseous composition is evidence of what's unfolding in the star system.

"This star has a planet that we can't see directly, but because the star is so hot it is evaporating the planet, and we detect the atmosphere it is losing," Gaensicke said.

"There could be many cooler white dwarfs that have planets but lacking the high-energy photons necessary to drive evaporation, so we wouldn't be able to find them with the same method. This discovery is major progress because over the past two decades we had growing evidence that planetary systems survive into the white dwarf stage."

A glimpse of our own solar system's future

When the white dwarf was a puffed-up red giant, it would have been 100 times the size of our sun -- so large that the current orbit of the planet would have been inside the red giant. The planet moved closer to the white dwarf once the red giant blasted out much of its mass. The astronomers believe the planet might have shifted due to the orbits of other planets in the system, suggesting that they might have survived the star's outburst as well.

"Until recently, very few astronomers paused to ponder the fate of planets orbiting dying stars," Gaensicke said. "This discovery of a planet orbiting closely around a burnt-out stellar core forcefully demonstrates that the universe is time and again challenging our minds to step beyond our established ideas."

In about 4.5 billion years, our own sun will follow a similar path by losing its outer layers to expose the remnant of a dead core, the white dwarf. This phase is expected to destroy Mercury, Venus and likely Earth as well.

The researchers also believe the radiation may also evaporate Jupiter, Saturn, Uranus and Neptune, with only atmospheric gases pulled around the white dwarf for any potential intelligent life to learn about our solar system.

"In a sense, WD J0914+1914 is providing us with a glimpse into the very distant future of our own solar system," said Matthias Schreiber, study co-author at the University of Valparaiso in Chile.