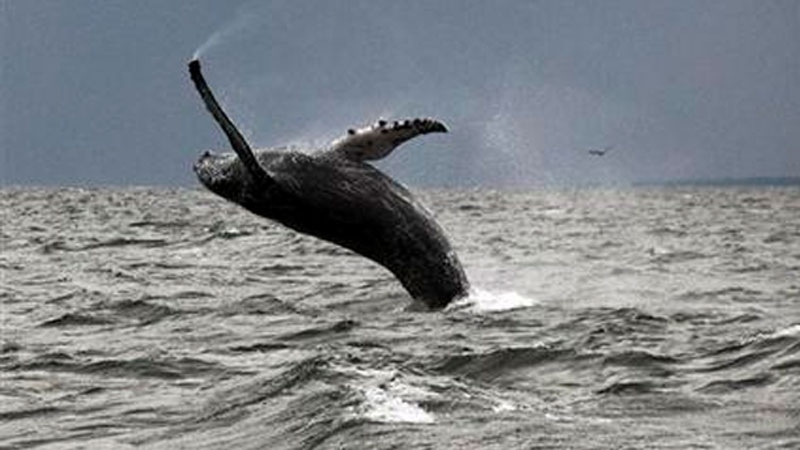 In this Sept. 12, 2015 photo provided by Dan Lent, a humpback whale breaches the water in Long Island Sound off the coast of Stamford, Conn. (Dan Lent via AP)

HARTFORD, Conn.  -- It has been the year of the whale on Long Island Sound, where fishermen and other boaters have reveled in the return of the marine mammals after a long hiatus.

The highly unexpected sightings began in May, when three belugas were spotted off Fairfield, Connecticut. A minke whale was seen off Norwalk later in May. And there have been several humpback sightings in recent weeks, including as far west as Mamaronek, New York, according to records kept by The Maritime Aquarium in Norwalk.

Whales haven't been seen in the western part of the sound since 1993, when a 30-foot finback was spotted in New Haven Harbor, said Joe Schnierlein, research and university liaison for the aquarium.

Videos and photos of humpbacks breaching the surface have been posted online by boaters who were both excited and frightened by the close encounters.

On Saturday, Chris Curran of Darien, Connecticut, caught a young humpback whale on cellphone video breaching the water about 20 to 30 feet from his boat about 1 1/2 miles off Darien and Norwalk, while he was with his 8-year-old son and his son's friend.

Curran said the humpback appeared to be a young whale about 10 to 15 feet long; it came out of the water about nine times, the last time being the closest.

"I was having heart palpitations I was so excited," Curran said. "The boys were fearful for their lives. They thought it was an orca. I was never concerned about it hitting the boat until that last incident then I got out of there fast."

Lately, the whales have been the talk of Long Island Sound, including warnings to boaters from state and federal environmental officials to watch for whales and try to stay at least 100 feet away from them. If a whale gets within 100 feet, boaters should put their engines in neutral and not re-engage them until the whales are clear of harm. Federal law protects marine mammals.

Schnierlein believes the whales were attracted by a big increase in bait fish including menhaden, which are rich in omega-3 oils and calories. He surmises menhaden have thrived for several reasons, including 2-year-old harvesting restrictions on them and a lack of rain, which he believes has reduced pollution-laden runoff from entering the sound.

Whale sightings in the eastern part of Long Island Sound also are uncommon events, according to records kept by Mystic Aquarium. The last confirmed sightings before this year were a long-finned pilot whale off Stonington in 2009 and a minke off Old Lyme in 2005, said Janelle Schuh, stranding coordinator at the aquarium.

Daniel Lent of Easton, Connecticut, says he believes he saw two humpbacks Sept. 12 off the coast of Stamford. He snapped a photo of one breaching the water. He said it was about as big as his 27-foot power boat.

"I thought I was staying away a safe distance," Lent said. "Then one came up behind me. That's when I freaked out. It went from being really cool to being really scary."