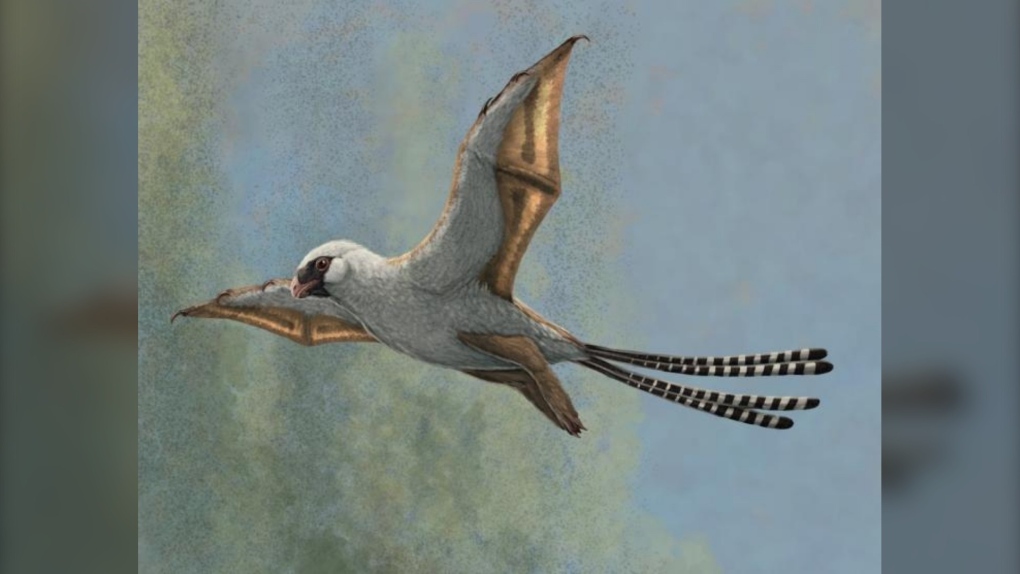 Life reconstruction of the bat-winged scansoriopterygid dinosaur Ambopteryx in a glide. (Gabriel Ugueto)

TORONTO -- A new study investigating the flight capabilities of two tiny dinosaurs with thin, bat-like wings is shedding light on the evolution of avian flight itself -- an evolution that, it turns out, had a lot of dead ends and false starts along the way.

Published in the journal iScience earlier this week, the study looked at Yi and Ambopteryx, two dinosaurs who lived around 160 million years ago in the Late Jurassic era of China. Both were believed to have the potential for flight due to the thin membranes stretched between their arms and their bodies.

However, when researchers applied mathematical modelling to these prehistoric creatures, they found that they were nowhere near capable of propelling themselves through the air like birds, and instead would’ve used their small wings only to glide.

"We know some dinosaurs could fly before they evolved into birds," Hans Larsson, a professor at McGill University and Director of McGill's Redpath Museum, said in a press release. "What this shows us is that at least one lineage of dinosaurs experimented with a completely different mode of aerial locomotion.”

Researchers scanned fossils of Yi and Ambopteryx with lasers to pick out where the soft tissue would fall on their wings, details that couldn’t be seen under regular light.

Then they reconstructed the dinosaurs’ morphology with computer modelling to see whether they could power themselves to flight, whether by leaping from trees or from the ground. They also changed important variables like wingspan and body weight to assess different scenarios on how they might have flown.

In order to flap their wings with enough force to support their own body, the dinosaurs would’ve needed strong pectoral muscles, which were absent. Ambopteryx could only take off in flight at the lowest estimated body size and highest estimated power level, and Yi could not obtain any lift-off except at body weights researchers said were likely too small to be accurate. In almost all scenarios, the dinosaurs could not get off the ground under their own power.

Even with a running start to help them, the minimum take off speed for Yi would be between 1.1 and three times the maximum possible speed Yi would have been capable of. For Ambopteryx, the minimum take-off speed was even more out of reach, needing to be at least 2.3 to four times their top sprinting speed.

Both Yi and Ambopteryx would have to launch from higher points in trees at higher speeds than other creatures that glide, and they would be less precise when they landed.

They are thought to have spent most of their lives in trees, eating insects, seeds and plants.

AVIALANS AND THE EVOLUTION OF FLIGHT

Many modern creatures can glide, but only pterosaurs, bats and birds developed the structures necessary to fly by flapping their wings.

It’s well known that modern day birds are descendants of dinosaurs, but this new research adds a complication to the predominant theory of how avian flight came about.

The majority of dinosaurs with flying capabilities -- called avialans -- have had very similar characteristics and body types, and different families of dinosaurs who have evolved towards flight have started as ground-dwelling creatures and gone through similar body changes -- such as a reduction in body size, getting an increased shoulder mobility and developing feathers on their four limbs -- before gaining the ability to fly.

This has told a reasonably streamlined tale about the evolution of flight from dinosaurs to birds for the most part, the study explained.

But Yi and Ambopteryx are outliers, showing that dinosaur flight went through some bumps on the road.

Both are therapods, a categorization of carnivorous dinosaurs with hollow bones that includes the T-rex and birds, but they’re also part of a little-understood group called Scansoriopterygidae, which are climbing and gliding dinosaurs.

It’s been posited before that scansoriopterygids could represent an interim stage before avialans, an early model of bird flight that then evolved to support more powered flying. But researchers say this was far more likely an independent attempt at flight, a “failed experimental lineage of early arboreal gliders” unconnected to the evolution of avialan flight.

“Given the large number of independent occurrences of gliding flight within crown mammals, this should perhaps be unsurprising, but it does create a more complex picture of the aerial ecosystem,” the study stated.

"We used to think of birds evolving as a linear trend from their ground-dwelling dinosaur ancestry,” Larsson said in the release.

“We can [now] revise this textbook scenario to one that had an explosive diversity of experimentation, with dinosaurs evolving powered flight several times independently from birds, many having fully feathered wings but with bodies too heavy or wings too small to have gotten off the ground, and now, a weird bat-winged group of dinosaurs that were not only the first arboreal dinosaurs, but ones that glided.”

He added that he feels like researchers are “still just scratching the surface,” of dinosaur biodiversity.

Yi, Ambopteryx and others scansoriopterygids had a short-lived existence, unable to compete with the mammalian gliders and avialan fliers that were evolving around them.

Both dinosaurs went extinct after only a few million years, according to the press release.

"Once birds got into the air, these two species were so poorly capable of being in the air that they just got squeezed out," lead author Thomas Dececchi, an assistant professor of biology at Mount Marty University, said in the release. "Maybe you can survive a few million years underperforming, but you have predators from the top, competition from the bottom, and even some small mammals adding into that, squeezing them out until they disappeared.”

Gliding isn’t an efficient way to get around, as you have to climb to a great height first to travel any sort of distance, he explained.

“It's not efficient, but it can be used as an escape hatch. It's not a great thing to do, but sometimes it's a choice between losing a bit of energy and being eaten. Once they were put under pressure, they just lost their space.